Skip to content
On Tuesday, Ramu, the Product Development Manager for ERL Relays & RTUs, asked if I had been to a temple yet.  No, I had not.  He was astounded, said that I had to go!  Why had I not gone to the one right across the street from the hotel?  I had walked past it several times.  Truthfully, I was concerned that I might, in my North American ignorance, be disrespectful of the spiritual nature of the temple.  After all, someone from a Hindu culture might not realize the rituals and customs associated with our Christian churches, and how would we like that?  Well, Ramu told Srini & Mani to take me to the temple on Wednesday morning.

So here we are, going to the Minaksha Temple, basically across the street from the Royal Minaksha Mall.  Another humbling experience. 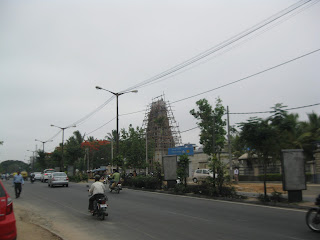 There was a large courtyard where you had to remove your shoes and socks.  There was a “shoe check hut” staffed by a clerk, where they put your shoes into an organizer cube and gave you a chit.  Then you crossed the threshold and entered the temple, underneath the temple spire.

This particular temple spire was being renovated.  Wooden scaffolding and workers doing masonry high above your head.  You could see splats of material on the concrete & brick courtyard floor.  I worried that one of the workers could fall and go “splat” as well.  None did, as far as I know.

This temple was dedicated to a husband-and-wife pair of gods, so there were two central shrines, each tended by a holy man (not sure what to call them, monks maybe?).  Each came out from the shrine with a tray of burning incense candles, a pot of paint, and a basket of flower petals and packets of the same colour paint – you waved the smoke from the incense into your face, and the monk put a dot of paint on your forehead, then gave you select petals and a packet of the same colour paint to renew the dot later.  You optionally put a small donation in the basket. 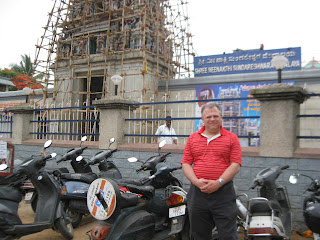 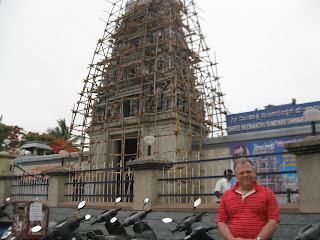 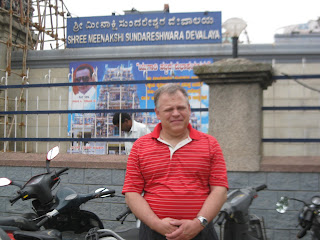 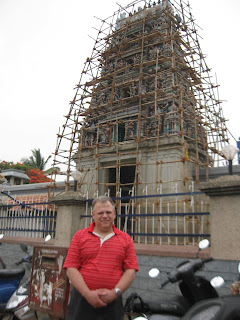 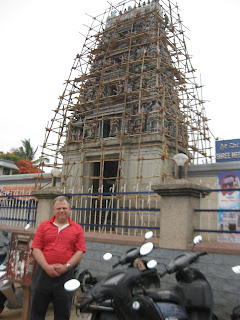 We were not allowed to take photos in the temple – in fact, cameras were entirely banned, so I can’t show what it looked like inside.

Srini & Mani led me around the walls of the temple, where likenesses of the other gods were placed.  We stopped at each one, and they explained the significance.  There was then a larger fenced-in area with eight gods, each looking in different directions – they were not to be able to see each other – and represented the sun, moon, and stars.  Srini & Mani walked eight times around this area, and I joined them.

We did some meditation and prayer back in the centre of the temple, at the main shrines.

Then, back to our shoes and back to work.

On the way out of the temple, there were several very elderly and very crippled women sitting, begging.  I had not brought enough money with me, had nothing to give.  But, Srini & Mani, both of whom of course knew about these things, had a little bit left, and gave some to the women.  Charity is part of the culture.

We ate in the lunchroom one more time.  Although the food is very different, I’m getting used to it.  Yes, the customs are different, but the lunchroom staff try hard to treat me very well.

In the afternoon, we went back to the lab, this time from the ERL office (other times had been VIA picking me up at the hotel), so we went on a private toll road.  Wow what a difference!  Very smooth, wide open, and empty.  Not many can afford it, I guess.  Back home in Canada, they would call this a “P3 partnership” because I think the local government participated in the toll road as well.

Contrasted with the smooth open fast toll road, back onto the city streets for the last few kilometres, ugh.  I was watching around, and looked up at the under-construction metro.  Yes, they are in the process of building a metro elevated train system all around Bangalore.  When it is completed in a few years, they will be amazing, and relieve the congestion, I’m sure.   Anyway, we drove right under one huge concrete section, probably 15 metres long by 5 metres wide and 2 or 3 metres thick, just suspended above us on some kind of a gantry crane machine machine.  Now, it was a large sturdy machine, but it still made me nervous… back to my old tricks, worrying too much?  You would never know what hit you, I guess 🙂

Anyway, our purpose in the lab this day was different, as mentioned before.  We were no longer trying to fix things, just getting a baseline.  We took the much-modified unit with us, but also a new unit, modified to (supposedly) the same level.  We did our tests, very efficiently, then bid our friends at the lab adieu, and were off again.

This being our last trip to the lab, Mani wanted to stop for a snack, so we stopped at a McDonald’s.  McDonald’s and KFC are huge over here, quite a delicacy to the Indian palate.  I think I mentioned it before, but let me reiterate – no beef.  Nada, zip, none.
The boys dropped me off at the hotel.  I did some paperwork, and zipped out to the flea market the Nobert and I had visited while he was here.  I picked up a few trinkets – the shopkeeper had already closed but opened “just” for me, nice.

Traffic in front of the hotel was, well, ridiculous.  Crazy.  At 9 o’clock at night!  I cannot describe it any other way.  I tried to capture some of it on video using my tablet.  This is me, trying to cross the street.  Sorry for the bit of bounce – I was trying to keep out of the way of the traffic!  What you do is, watch the locals – when they go, you go.  When they look nervous, you start looking around for a place of refuge!