Getting them was a bit of fun.  I had to do a computer based multiple choice test of the rules of the road (some were difficult, about distance to follow an emergency vehicle etc), get an eye test, explain my right eye being blind.  Then, get the cars titled, show all the import documentation, then had to actually present the car for inspection to see the “safety and emissions decal” which, oops, wasn’t there, after waiting 1/2 hour for someone to look.  They needed the “attestation letter” from GM that I paid $110 for, before leaving.  Sigh.

The first clerk insisted that I had to bring down the 1957 for inspection as well.  Fortunately, the second one dismissed that with a wave of the hand, because for heaven’s sake, it’s from before there were emissions and safety stickers.

Anyway, there it is – the new plates and the driver’s licence.  It’s official now.

It turns out that they do not use a front licence plate on their vehicles here in Arizona.  I don’t have anything to put on there, for now.  Hmm…

We woke up in Las Vegas, New Mexico.  We gassed up and headed south, jumping off of Interstate 25 and heading a bit back east on highway 84.  This avoids Santa Fe and the dipsy-doodle around the mountains.

Then on through Alburquerque, stopping briefly at a truck stop near Gallup, new Mexico, and onward into Arizona! 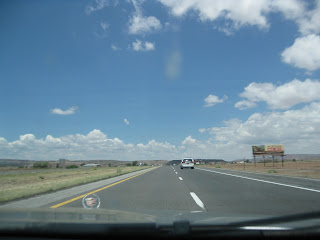 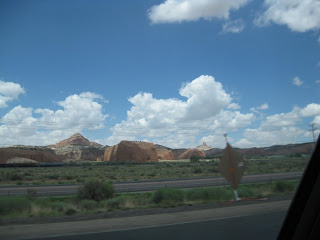 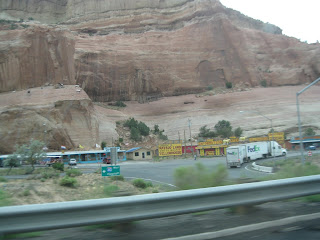 Rather than continue on Interstate 40 to Flagstaff then down Interstate 17 to Phoenix, we decided to hop off onto highway 377 at Holbrook, then drive the scenic route through Payson and into Phoenix from the west.

Did I say “scenic route”?  I guess I did.  It certainly was!  And, the temperature just kept rising and rising, all the way into Phoenix. 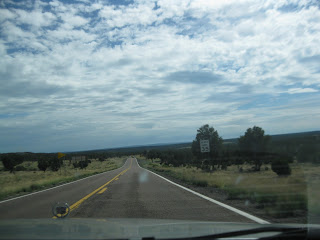 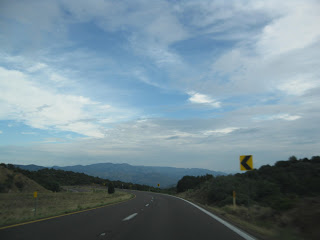 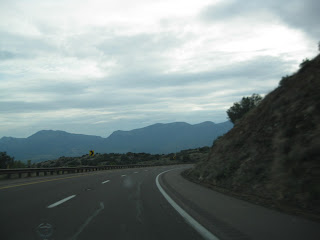 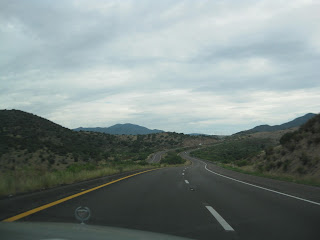 The road was windy, twisty, up and down.  The car started to get grumpy during this last stretch – at least the transmission did.  It downshifted when it wasn’t supposed to, and at one point, refused to upshift when it was supposed to.

Every time we came around a mountain or over a pass, we expected to see the city.  It sure took a long time before we saw Phoenix.

Once we entered the city, Eric was like a machine – he knew exactly where he was going.  Some of his best friends’ parents have units in this same complex.  We arrived around supper time.

In the picture of me and the car at the complex, you can see a black Pontiac behind me.  Shortly after we arrived, and while we were still unloading our stuff, a young fellow was fussing about in the engine compartment, talking to his buddy on his iPhone and waving a part in front of the camera, asking his friend if it was important.  I wandered over and asked if I could have a look.  It was the pulley from the power steering pump, broken clean off!  Worse, everything on this engine, air conditioning, alternator, and the water pump, appears to run off of that same serpentine belt.  The fellow was some upset when I advised him that although the power steering pump wasn’t all that important, some of the other stuff that the belt was driving was important, and the car should not be driven.

Eric chatted with that fellow, Darnell, later.  It turns out that he’s from Los Angeles, was working in a warehouse for the Fresh-n-Easy grocery store chain, and was laid off.  He’s out here at a relative’s place, looking for work.  He has a little girl back in LA that he’s trying to support.  Yikes.  I hope he finds something.

Anyway, we arrived, moved the junk indoors, and went out for pizza.  We got zero service at the Pizza Hut take-out store, so we just bought a bunch of fixins at Fry’s and made it ourselves.  Then crashed, well past time to rest.

In the morning, we set out for Mount Rushmore.  Wow, it’s pretty impressive.

We also saw a few old cars – hey, I heard about these guys from the “1958 Cadillac Owner’s Association” mailing list – there’s a guy in a 1958 Cadillac driving the tour, but didn’t see him – it’s a group from Europe, something like 20 or 30 cars, all driving across the USA all the month of July – the Lincoln Highway Centennial Tour.   Yes, all from Europe – cool huh?  I just got pictures of a couple of them, but there are bunch more – check out their web site. 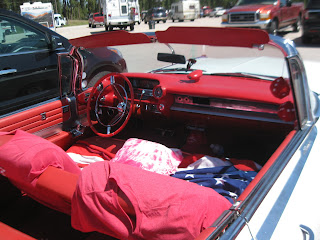 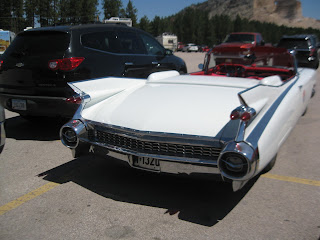 Onward to the Crazy Horse memorial, which isn’t quite as impressive – well, it will be when it is done – man, how do they ever complete these things, so much material to blast, carve, and move?

Then we blasted out on the two lane highways, off into Colorado.  We stopped for fuel & supper in Boulder, Colorado, and pushed onward.  We made it to Las Vegas!  Relax – not Nevada, but Las Vegas, New Mexico, near Albuquerque 🙂 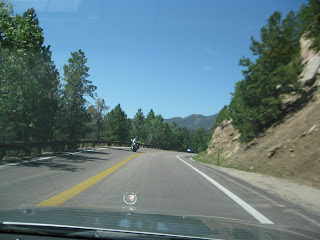 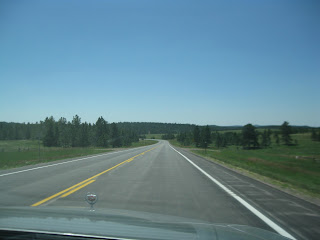 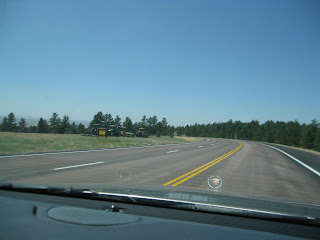 It was time to refuel the old beast in Fargo.  The de Ville would have done much further, but might as well fuel it up too.

Oh boy, as soon as we slowed down off of the freeway, I knew something was wrong with the ’57.  There was a loud engine knock, and she was idling very rough.  Oh, no.

Thinking it was an overheat problem, we fuelled up anyway, then went to eat.  Nope, still there.  Very loud, and seemingly deep in the engine.  Just like Bob had found at Seven Oaks a few days before, only this time it wasn’t going away.

We checked out local area storage facilities, but the offices were all closed on Sunday.  We stopped by a local shop that happened to be open, but they only did big semi trucks.  They suggested we try some Lucas Oil Modifier, which we did, and it did not help.  Double yikes.

I wondered if the proper Engine Oil Supplement (EOS) was added when the oil was changed the week before.  Doesn’t matter, whatever is done is done.

OK, so we have to stay the night in Fargo.  Oh well, I booked the hotel that I had stayed in when I was down on my TN visa trip, and we made our way to the hotel.  It was only 3 miles or so away, so I drove the ’57 over.  Ugh, it sounded horrible!  And, to get enough power to go up over the Interstate, it sounded even worse, and had no power!  Eric was behind me, and said it blew a nice shade of blue out the tailpipe.  Argh.  We got to the hotel and parked it.

If you know me, you know I was stressed about the whole thing.  What I did though, was just say, “I can’t do anything about it, so forget it.”  And, I did.  I actually slept well – perhaps due to the lack of sleep the night before, but it felt good.

We spent Monday morning, 15 July, zooming around looking for places to store the car.  A self storage facility couldn’t open its gates to us until after 5 PM, an RV centre with a large compound just said “no”, but a great little company right on the main street said they would think about it.  Friends in the antique auto club got to work and found a place nearby for the car.  We heard back from the little company, Roll-A-Ramp, that they would allow me to put it in their compound, mostly because the company owner had old cars and sympathized with me.   Not free of course – nothing is, in this life – but we had a safe place to put her.  Yay!

The rain let up just long enough to allow Eric and I to empty the contents of both cars onto the parking lot behind them, then rationalize it all down.  Some tote bins were innocuous and could be left in the ’57.  Some had liquids in them that really shouldn’t sit too long (could leak and damage upholstery – especially when loading / unloading onto a car carrier).  Some stuff was low value and was discarded.  In the end, we cut down to the bare minimum in the 2005 de Ville, and all the stuff I don’t need for a while into the ’57.

AAA couldn’t pick the car up for over 6 hours, ugh.  The contact from the club got us in touch with a local tow agency, and they moved the car almost immediately, yay.  Poor operator, though – he had to crawl under the car to hook it up, and got completely soaked.  We had to put wood down to ensure that the back end wouldn’t drag or hang up on the tow truck.  Good thing we did, we cleared by about 1/2 an inch. 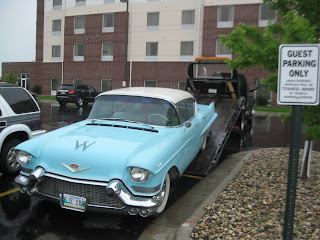 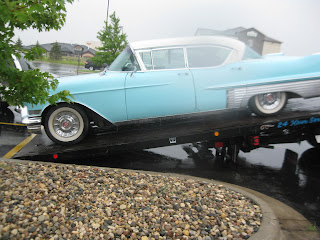 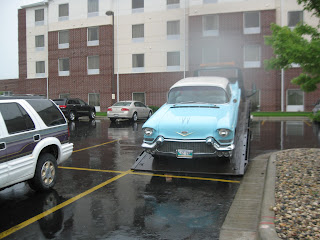 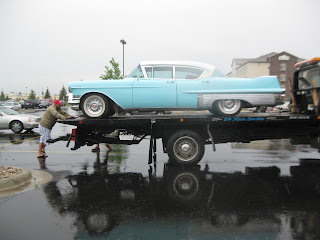 So we put her under the shelter in the compound, covered her up, and finally got underway in the de Ville around 2 PM, only a full day behind schedule.

Remarkably, once we were on the road again, I felt at peace.  We did what we could, all situation stable now, let’s get on with the trip.  Eric was driving, and we just rolled on down the Interstate. 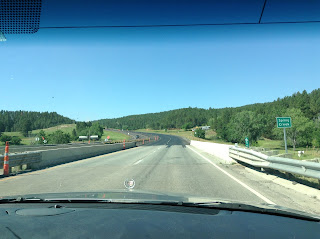 We decided that, since we were in a well equipped modern car, we’d take a bit of a detour and go to Mount Rushmore.  Great idea!  So we headed west through South Dakota, to Rapid City.  There was a lot of construction on the Interstate, but then again, it was a nice open highway, and with the mountains in the far background, mmmmm. 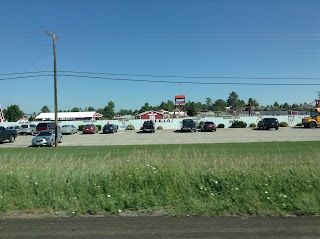 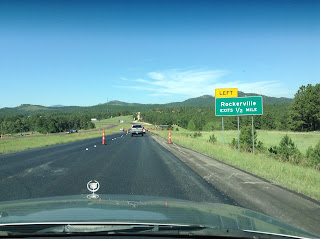 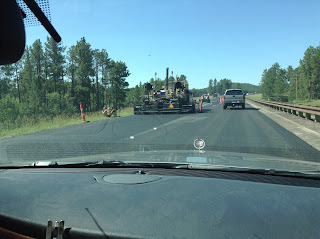 What was the line from Good Morning Vietnam?  “Oh six hundred, with the oh standing for, oh my God it’s early!!”  Yup, I concur.

Eric arrived right around 06h00, and we said our final goodbyes to my mom and to Terena, and away we went.

I had to fill the thirsty old Fleetwood up with fuel.  I had also forgotten something, don’t forget what, but Eric went back for it while I fuelled up.  He had the faster, more modern machine, after all.

Then, off to the USA.  Don’t look back, that’s a trail of sobs and tears on the highway…

Getting into the USA was uneventful.  I went through first, and had to formally import the Fleetwood.  Eric was sure we’d get put into the “you sit here while we empty and search the car” garage, but we didn’t.  He and I dutifully allowed the customs and immigrations officers to do their work.

It was good we were there again, because the officer on 30 June when I “imported” the 2005 de Ville said that he didn’t have to sign the import form, which seemed wrong.  Sure enough, it was wrong.  This fellow was a good guy, but he wanted to inspect the car, look for the emissions certificate, find the country of origin of the car (yikes, all mainstream Cadillacs are built in Lansing, MI, USA).  It was all good, so he signed off, and we were on our way.

I had purchased a pair of long range FRS radio transceivers for Eric and I to use on the trip, and a pair of car chargers.  We chatted on and off on the way.  Kind of fun, although someone said that it wasn’t really a father-son trip because we weren’t in the same car.

We stopped in Grand Forks, which was fine.  It was too early to eat, but with my small middle aged bladder… enough said.  Then by Fargo, we were hungry, so we stopped for a bite, and it was time to fuel up.   [ cue ominous music again ]