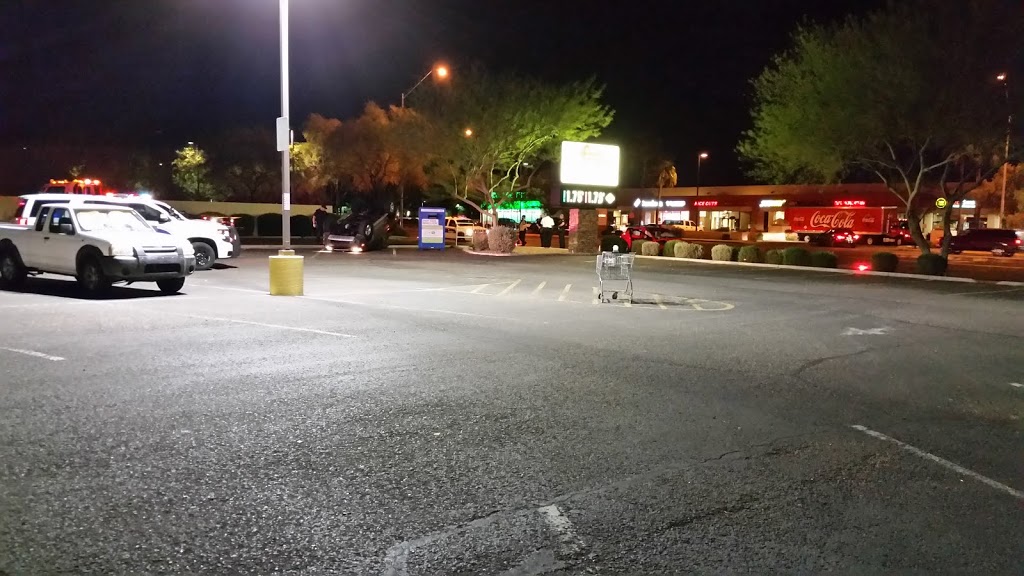 There was a little mishap on Bell by the Fry’s this evening.

I had zipped down to Fry’s to get some groceries, and saw a bunch of flashing lights in the corner of the parking lot.  I had to look closely, trying to figure out what everyone was staring at.  There was  one car crunched, the other upside down. I think someone was still in the upside down car when I first arrived. Two police cars in attendance. When I was leaving, one was on the tow truck, and they were about to hook up the second one…

OK, not so dramatic, but I thought it was kind of unusual, kind of like out of a movie.  Remember that scene in Blues Brothers in the mall, where the cops are in their car, upside down, spinning?  Ha ha ha! 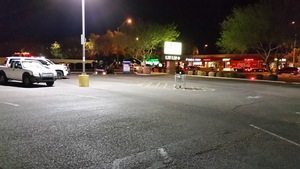 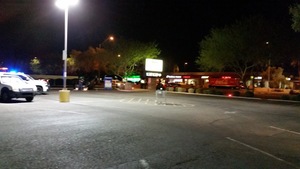 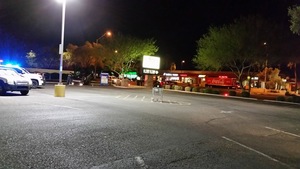 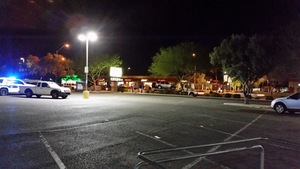 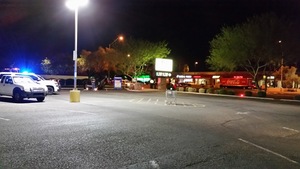 I watched most of the Jets vs Anaheim game, but needed to go for a walk.  Besides, I wanted ice cream 🙂    I took a stroll in the warm evening air.  I walked over to the Chase Bank near Cave Creek & the 101 Loop, took out some cash, but then decided that I didn’t need ice cream, so I walked back down to Union Hills Road and took up my “regular” route (at least it was regular until my whole system broke down 2 wks ago when I started working silly hours then flew to France!).

I was listening to the game through my phone, tuned through the Internet to TSN 1290 Winnipeg.  Curse that goal with 20 seconds left, grrrr!  Just as it was scored, I came up on 30th St and Union Hills, where there were two cars stopped, looked like maybe a collision – but it wasn’t.  One of the cars had been going westbound (coming toward me) on Union Hills, and had stopped along the curb just short of 30th St.  The other had come from the east, cut it off, and was parked at an angle in front of it.  Both front doors were open on the one along the curb.  A young man was standing in the open driver’s door, a young lady in the open passenger door.  The young lady was crying, sobbing, obviously upset, and talking into a cell phone; the young man was demanding that she give the phone to him.

A domestic dispute, perhaps?  Hmm.  I asked if everything was OK, she sobbed, “NO!”   It was then that I saw someone slumped in the driver’s seat.  Oh, no.

I asked if she had 911 on the phone – yes.  She handed the phone to the young man, just as a van pulled up, and an older man & two younger kids got out.

The young man managed the situation, was told to remove the lady from the car and put her on the pavement.  The older man & he took her out and laid her down.  I didn’t get involved (something which I feel somewhat guilty for now), but asked the kids to move the van behind the car so as to protect the rear.  They were not of legal driving age.  The young lady was in no shape to drive anything, anywhere, so I went back and flagged all the traffic over to the next lane.

Meanwhile, the young man started chest compressions.  The young lady was beside herself, “Where is the ambulance?  That’s my mom!  I can’t lose her!  I’m going to lose her!”

About two minutes later, a fire truck emerged from the corner at 32nd & Union Hills.  I shouted “four blocks!” and directed the truck in, then stepped back.

The firemen (yes they were all men) were slow & methodical, and I was wishing they would hurry up 🙁  But they got in there, relieved the young man from the compressions, and got the lady hooked up.  The older man was pacing, standing behind the car, clasping his hands, obviously praying.  The young man scooped up the young lady, took her to the van, where the other two kids were, and did his best to calm them down.

I asked the older man, if he was family (this was all very confusing to me).   Yes, that was his wife on the ground.  The young lady was their daughter, whom she was driving home when this apparently happened.  The young man was her boyfriend.

The ambulance arrived about two minutes later.  They got a strong pulse and regular breathing back!  The boyfriend was busy telling the daughter all this, that things were going to be all right, to be strong.  She was not doing well.

The daughter went to park the car along 30th street.  Again she was not doing well, so I directed her to a space under a streetlight, advised her to turn around to face the right direction (who knows if they tow for such things here, but it’s not a time to find out), to turn off her four way flashers, and to lock up the car.

The fire leader asked the daughter questions about the incident, like did the mother complain of any symptoms, did she say anything… etc.  No, nothing.  Then he turned to me and asked who I was.  I said “oh no, I’m just a passer-by, I have no knowledge of anything.”   And then everyone was on their way.

I continued my walk, shaken.  The hockey game seemed not-so-important now.  I stopped at the Circle K at the corner of 32nd and Union Hills for my ice cream, but they don’t have any.  I settled for some M&Ms 🙂

Life is short and can be taken from us at any time.  Enjoy it while it lasts.

And, to quote Percy Mayfield, Nothin’ Stays the Same Forever:
If you are a… thinking person… take the time… to pray! 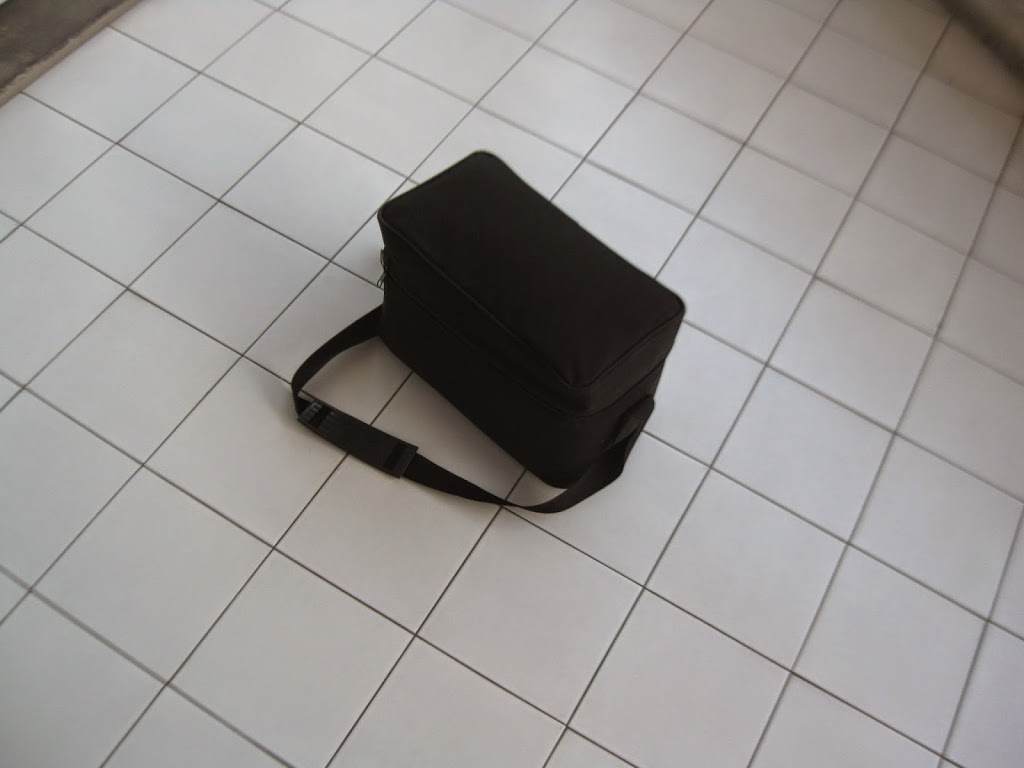 One story of the trip over here that I just have to share, right away, before I forget.

Upon arrival in Lyon, after some 17 hours of flights & layovers, neither my colleague Sam nor I had any cash.  I had been advised to just withdraw some at the airport, from my account back in the USA.  Sam spotted a cash machine and I wandered over and pulled 200 Euros out.

Sam, however, had brought US dollars.  Nope, they won’t do anything here.  So we set out to find a place to exchange some US dollars for Euros.  She went over and asked at information, and we were told that there were cash exchanges on up on level 2, terminal 2.  So, we wandered off that way.

It turned out to be a loooooong walk… again.  At least a kilometre.  About halfway there, I looked back and realized that I had my suitcase, and my briefcase, but not my CPAP machine case.  EEK!

I ran back toward the main floor, where we had been.  There was an escalator up, but I had to take the stairs down, with suitcase and (ugh) heavy briefcase.  I got to the bottom, and there in the middle of the floor, was my CPAP machine case, yay!

As I approached it, three security guards who were standing there, waved me away.
“Monsieur, ne passez ici!”
“No, no, it’s mine!”
“Eet eez yours?”
“Yes, it’s my CPAP machine!”

Man, did they look relieved.  They were suddenly on their radios, apparently cancelling the police/bomb squad, who were already on their way!

They gave me a stern warning.  I opened the bag and checked that all the contents were undisturbed (if you know me, then you know that I would stress about such things).  I apologized profusely, and left, thankful that they hadn’t blown up my CPAP machine, heh heh.

I recall now that I had the CPAP bag hanging off the back of my suitcase, but it destabilized the suitcase, so I took it off and set it beside the suitcase, as I waited.  Curses, forgot to check that I had picked it up again!  Wow, I’ll be more careful next time.

Oh, and yes, the machine is working fine.  Whew!  How would I sleep, otherwise?