Skip to content
I was up early (6 AM), finished my packing, checked out of the hotel and headed in to the office.  For something like 19 days, plus dinners and taxi rides, the cost was amazingly low.  They didn’t appear to have a locked concierge room at the hotel, so I took all my luggage to the office, so I could keep control of it.

Little did I know that this would be the longest day, ugh.  Long way before I sleep.

I met with ERL management in the morning, and gave my opinion of the products, the projects, and what they should be doing.

It was my last day with them, so Srini & Mani let me take them back to TGI Friday’s for lunch, at the Royal Minakshi Mall.  They were good sports!  The food was foreign to them, so they let me help them with the menus.  The mushroom soup was spicy but great, they enjoyed it too.

On the way back, just outside the mall, on the boulevard, there was a family of cows & calves just hangin’ out.  Wow.  Further down, on the back road trail, there was the bull!  It was obvious that he was the bull.  The picture doesn’t capture it, but, um, he has hangin’, yikes.  The boys walked well clear of the bull, and hastened to make me do the same.  “The bull, he is angry, he will hurt you.”  Well, I don’t know about angry, but he sure didn’t look happy.  Then again, he looked rather gaunt, and in similar conditions, I might feel the same (refer to pictures above, I’m not gaunt 🙂 ).

After lunch, I wrapped things up and got ready to head out.  Srini and Mani had insisted that I come with them down the block to Kabob Masti for a 6 PM “snack”.  Wow, was more like a meal!  What a fantastic meal, too.  Kabob pita wraps, popcorn chicken, wow. 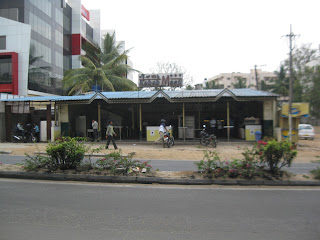 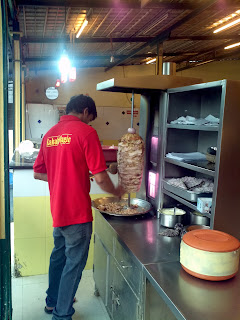 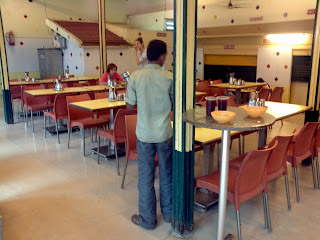 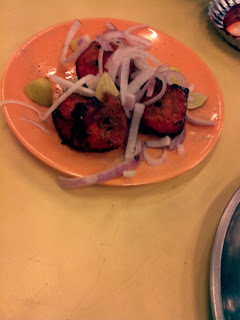 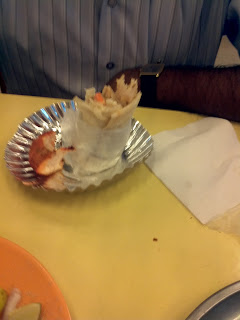 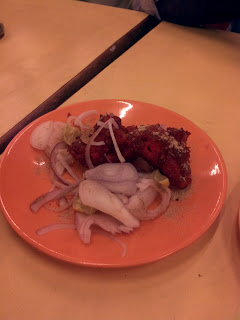 Well, the skies were threatening to open up on us, but we made it back to the office without getting wet.  Ramu, the manager, wanted to take me to dinner, so we called a taxi, and headed out an hour or so later.  We went to a beautiful upscale vegetarian restaurant in the heart of town.  The food was wonderful, the ambiance was great.

The taxi dropped Ramu off at home at around 10 PM.  By this time, it was pouring rain.  As we made our way to the airport, the rain got heavier and heavier.  There was up to a foot of water in the street!  In some spots, the driver had to keep the car in low gear, and keep the engine revving to ensure that it didn’t stall.  And all the while, we were passing and were being passed by motorbikes – those poor folks were soaked to the bone!

Then an 8 hour flight to Montreal.  Fortunately, I had 3 seats to myself, yay!  The flight was relatively empty.  Again, very little sleep.  I don’t know why I can’t sleep on planes.  Oh well.

We were late getting in to Montreal, which put us behind on getting to our next gate.  I was supposed have a two hour layover in Montreal, but most of that was eaten up by waiting for our luggage!  My bag was tagged through to Winnipeg/YWG but I was getting stressed standing in line waiting to check it through.  When we realized that we could just dump our already tagged bags onto the belt, we did so, and ran to the gate – getting there only ten minutes before boarding.  At least we were on Canadian soil, yay!  That’s when I felt like kissing the ground 🙂

Again, no sleep, so sad.

By the time I arrived in Winnipeg, I felt completely wired.  My mother and son were waiting there for me at the airport, and I just wanted to get home.  Eric, the rat, diverted us over to a certain Tim Horton’s, and…  my brother was there, from Red Deer, to greet us!  Of course, had to sit and chat with him for a bit.  It turns out that he was in town to purchase a new Jetta TDI to replace the one that was totalled in a collision last month (not his fault).  It was really good to see him.

I finally got to bed around 11 PM.  My math might be faulty, but I think it was about 53 hours between getting up on Thursday morning in Bangalore, and finally hitting the sheets back home.  One word: ugh.