Skip to content
Overnight on Sunday night, I had, um, gastro problems…  I was worried!  I started the Cipro that I brought from home.  Thankfully, the problems went away in about 24 hours or so, but finishing the sequence.

The boys from ERL picked me up shortly after 10 AM, and off to the lab we went.   We had had a great day on Friday, but just before the end of the day, we “went a bridge too far” and things got worse, but we couldn’t seem to backtrack and get success again.  So today, we were going to get back on track.

Alas, it was not to be.  We tried many, many things – lots of tests and experiments, but with little success.  We left at 6:20 PM after a long day.

The bright spot in the day was that we went to Gokul Krishna for lunch again.  Again, very good. 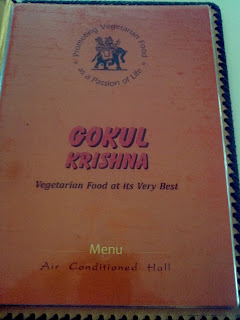 On Tuesday, we were doing strategy and planning for both the F-PRO 2000 EFT testing and F-PRO 3000 development.  I was called to a meeting with the top management of ERL where we discussed the work to be done, the progress (or lack thereof), and the schedule.  Now, for the most part, I declined comment the schedule, since I am not familiar with processes and outsource in India, and do not have deep knowledge of the resources available.  But certainly all eyes are on these two projects.

I had a couple of postcards to mail (nephews et al 🙂 ), and had tracked down a post office nearby the office – maybe 3/4 km away or so – 4 blocks east, 4 blocks north.  Late in the morning, then, I headed out to find this post office, using the GPS in my phone.

Well, I wandered a bit but I found it – literally a hole-in-the-wall with a metal frame wicket, behind which an elderly gentleman stood.  It appears to be a family operation, because when I put my postcards down, he didn’t know the postage to Canada, and bellowed to his wife to call head office and find out!

It turns out that it costs Rs15 (15 rupees) to send a postcard to Canada.  At Rs50 to the Canadian dollar, that’s about 30 cents.  What a deal!  I hope they get to their destination, and don’t end up in a dead letter office because of insufficient postage.

They put the stamps on my postcards – Rs10, Rs4, and Rs1, and cancelled them right there with a little hand cancellation stamp.  How cute!

At the last minute, I realized that I had one more to send, so I bought an extra set of stamps.

When I mentioned my adventure to Ramu, he told me that this was actually a village – or what was a village, before the city engulfed it, some time ago.  So in there you will find a small market, shops of every kind, and services like a clinic, etc.  Now that he mentioned it, I did see all of the above.  How cool is that?  A village in the middle of the huge city.

We ate in the lunchroom upstairs at the office, and to many folks’ amazement, it was fine for me.  Gerry was especially tickled at how I was able to manage most (not all!) of the Indian food set out for us, and that I actually knew what biryani was 🙂