Skip to content
It turns out that the first of May is the Labour Day holiday here in India.  Everybody gets the day off, but the product development crew is here because I’m here all the way from Canada, and we want to maximize the amount we get done while I am here.  Sorry about that, folks.

The air conditioning in the office is switched off at night to save power.  Security controls the switch, and generally turn it on at 9 AM.  On this day, security staff were there, but they didn’t turn on the switch on at 9 AM as they were supposed to.  The office was stifling hot… until we realized what was going on, and harangued them into flipping the switch 🙂

There are three washroom facilities on our floor – men’s with stalls & urinals, ladies which I would assume has stalls, and a centre, larger one that is private and has a shower.  I decided to use the separate one, as it always seems to have toilet paper.  Well, on my way out, I went to the soap dispenser, a pump, put my hand under it, and pressed down on the pump, but instead of coming out the nozzle, it squirted sideways onto my shirt!  And ran down my shirt, ugh.  So, off with the shirt, rinsed it out in the sink.  Well, I was so sweaty that hardly anyone noticed… and I was nice and cool for a couple of hours.  It’s so hot here though that it dries out in record time, wow.  Soon my shirt was clean and dry (soap, wash, rinse, dry).

Mani ran out at lunchtime and brought back big bags of food for lunch – “veg” and “non-veg”.  There was a crew of about eight or ten of us, made our way up to the lunchroom, and we had a bit of a festive spread.  It was great!  The food was good too, although they keep giving me mystery foods and saying, “Try this.”  Then they say, “It’s hot.”  Well I still have to try it, and usually it’s wonderful, but my lips are always burning after I eat with these guys.  I’m starting to think that they get joy out of seeing me sweat! 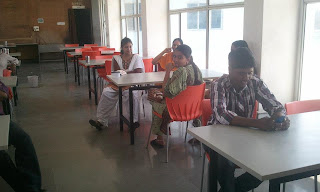 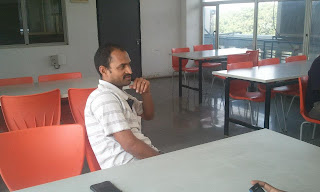 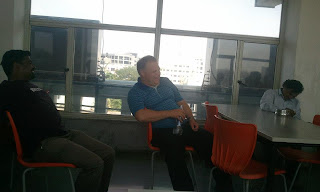 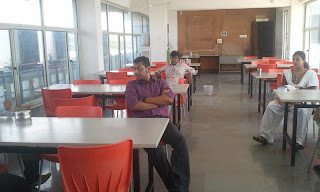 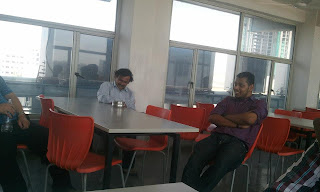 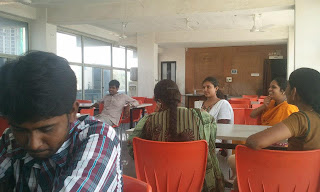 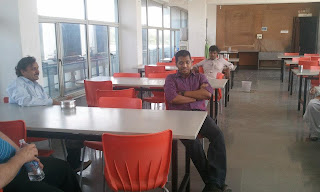 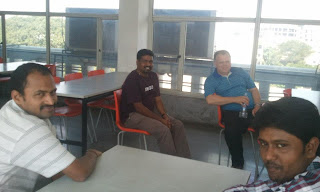 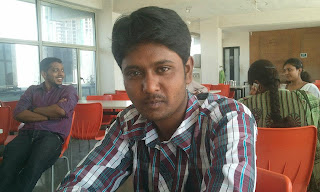 Darshan arranged that a Joyson and Prabhu would take me to the Bangalore Palace early in the afternoon, but I insisted that I work later to get the job done.  By the time we went, it was crazy traffic, and the cab driver was a bit surly.  He dumped us outside the gates, we had to walk with all my crap (briefcase & bag of other goodies) in to the palace (sorry about that, guys).  It was quite interesting – this palace was used for the royal family right up into the 1950s.  This palace was more like a very large home for a very rich family, than the hugely opulent amazing palace in Mysore – although, there was the main room where the king held court – very impressive.  This palace also had the first lift (“elevator” in North American speak) in all of India, an ornate wooden structure that went from the ground floor of the main entrance to the next floor above.

We had a short visit the castle (because I made us late), then another taxi picked us up and zipped us by the Bangalore State Legistlative Building.  Pretty impressive, a very beautiful building.  They are in the middle of construction around it, so we couldn’t get in close for a look.