Skip to content
The morning came early, but we met Lokesh and Karthik at 6:30 AM in the hotel lobby.  They are two young ERL engineers who had been pressed into being our tour guides.  Our van arrived and at 7 AM we were off to Mysore.

Even that early on a Sunday morning, the streets were fairly busy.  There were cricket pitches with people out playing on them, a market garden filled with people, and the traffic was, well, not crazy, but busy.

I put on sunscreen but then immediately started to sweat and washed some into my eye, very painful.  I tried to wash it out with tears for over an hour, but finally, two stops at restaurants along the road, and rinsing it out, it gave me some peace.

The drive was… interesting.  So many different things on the road.  Motorbikes with 1, 2, 3, and 4 people on them (more to say on that later), auto rickshaws, cars, trucks, overcrowded buses, trucks with boxes filled with people, trucks filled to overflowing (hay for instance) so they were twice their normal width, bicycles, pedestrians – you name it.  A new one for me were truck frames with engine, a hood, a seat and steering wheel, and a young man driving it – no windshield, no cab top – we saw 3 of those.  I learned later that they were going from the frame plant to the body plant… fair enough, but in Canada, they would be on a flatdeck.  Not so here 🙂 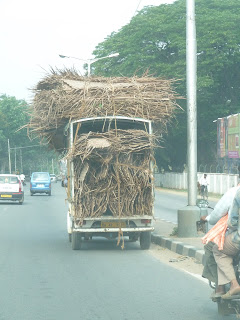 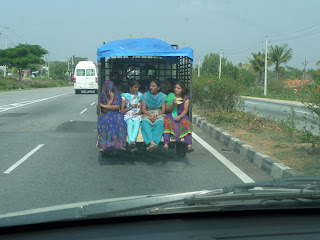 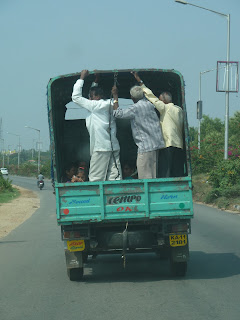 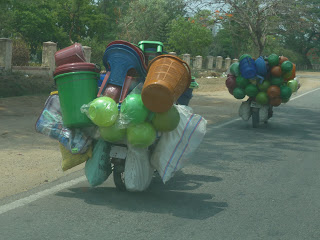 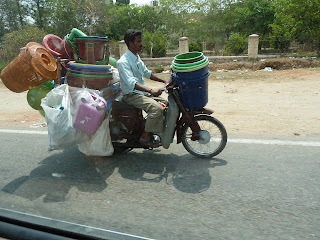 Despite it being  four lane highway all the way, our speed was uneven, and generally slow.  People were entering and exiting the highway all over the place, pedestrians crossing. vehicles weaving in and out.  It is crazy trying to drive here, I’m sure.

We got to Dariya Daulat Bagh, where the last Muslim king of Mysore had his palace, at about 10:30.  There was a nice long formal garden with a palace building.  We weren’t allowed to take photos inside the palace, but it was full of murals, paintings, and photographs of the life and times of the Muslim king, his conquests, his victory over the English (he is revered because he’s the only one that stung the English in this manner), then subsequent defeat.  Very interesting.

We had just been commenting on how we’d seen all kinds of animals but no horses, and, well, there were two in the parking lot, pulling carts. 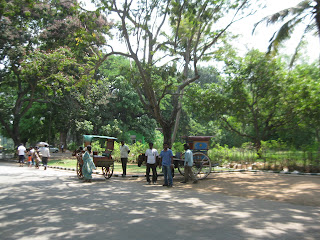 Onward to the Mysore Palace.  On the way, the driver suddenly pulled over to the side of the road, handed a person a few rupees, and got a garland of jasmine which he put hung from the rearview mirror.  Very nice smelling, mmm. 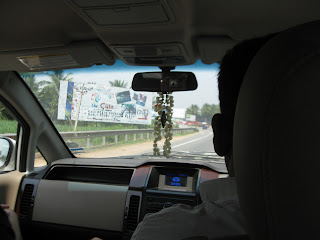 We had some fun around our cameras – we had thought that they wouldn’t be allowed on the grounds, so we left them in the van – but then lots of people had cameras, so we retrieved them.  Then it turns out that you cannot enter the palace building even if you just have a camera, so we had to check them. 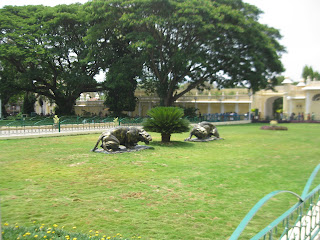 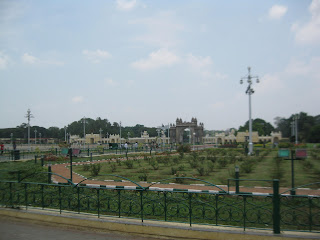 We had to take off our shoes to enter the palace, walked the whole place in bare feet.  It’s a magnificent place, wow.  Full of opulence and spacious rooms, ornate fixtures, and beautiful artifacts behind glass.  When we emerged, we went further down and toured a small temple.  The pathway was so hot on our feet, ouch!

We put our shoes back on, took some photos around the grounds, then headed out. 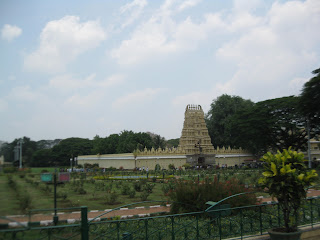 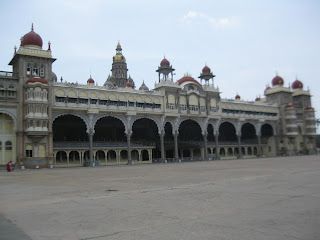 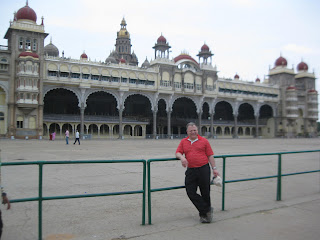 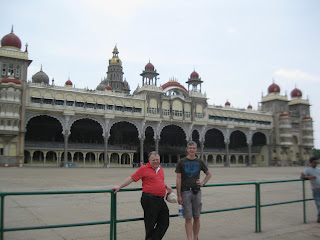 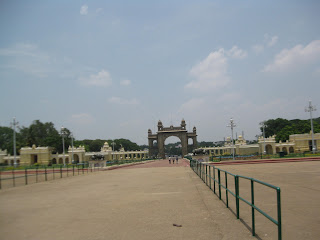 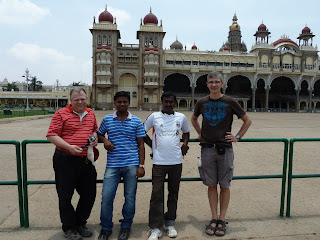 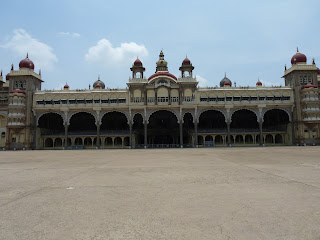 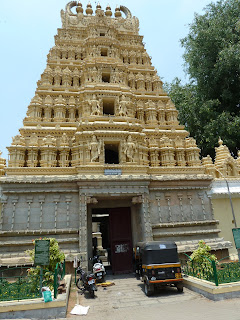 There were dozens of folks hawking their wares outside the palace.  I bought postcards, since we had no pictures from inside the palace.  Then a young child started harassing Norbert about sandalwood fans, followed us to the van, and proceeded to follow us and harangue him through the driver’s open window, lowering the price and upping the quantity constantly, for something like ten minutes!  I think he started at Rs150 for one, ended up offering five for Rs250.  Norbert kept saying “no” but just couldn’t shake him.  When we finally pulled out onto the street, that was the end of that.  I kind of kept expecting this kid to pop up out of nowhere to harass us somewhere else later in the day, like some kind of movie, but thankfully it didn’t happen 🙂

We went up Chamundi Hill, more of a mountain really, where we went to Sri Chamundeshwari Temple.  We didn’t go in because the lineup was hours long, but we checked out the large marketplace outside the temple.  We then went down to Mahabaleshwara Temple on the side of the mountain, with a large bull statue. 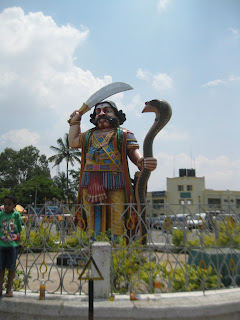 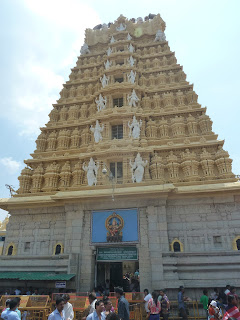 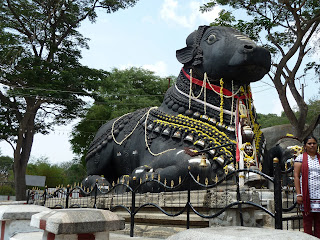 We stopped for a bit of shopping and lunch, then headed back to Bangalore.

The traffic on the way back was heavier.  Then the rains came, a torrential downpour.  It took almost four hours to get back to the hotel.  Norbert had time to shower and then he was off to the airport for his flight home.

On the ride back, I was again amazed at all the different vehicles on the road, including a family of four on a motorbike – dad driving, daughter sitting in front of him carrying something, son behind him, wife sitting side-saddle on the back.  All quite relaxed, zipping down a busy highway at 80 km/hr or so.  Wow. 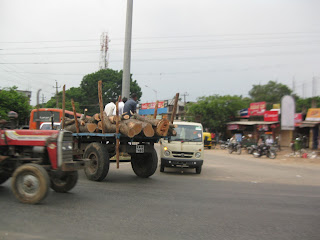 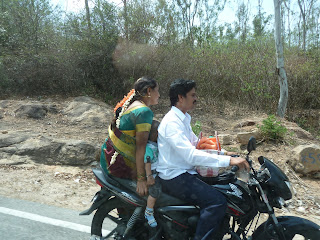 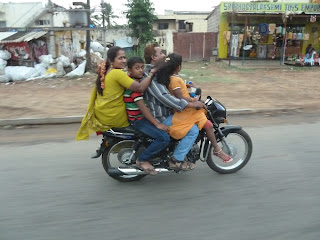 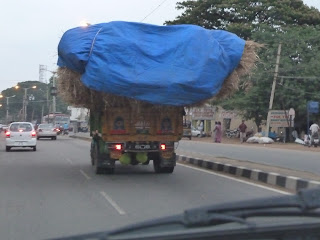 After getting back to the city, Norbert and I went for a stroll and caught a sub at the Subway in the Bangalore Central store/mall.  On the way back, I stopped by a wine store to buy a bottle of red wine.  I was rather disappointed at the selection – only five different red wines – two imported, and three domestic!  None suited my fancy, but finally I chose a domestic Cabernet.  Well, it was Rs685 (about CA$13.70).  I used my Mastercard.  When the PIN request came up, the guy asked me for my PIN!  Yikes, I said something like, “the card is mine and the PIN is private.”  He said “sorry” and handed me the PIN pad.  Then he realized that he had entered the transaction as Rs485, not enough to pay for the wine.  He wanted to cancel and restart, to which I just told him I’d pay the difference in cash.  I had a weird feeling about that transaction.  I checked, nothing untoward has happened in my Mastercard account.  Not yet, anyway.

Norbert flew out of Bangalore late Sunday night (well really Monday morning), so as of Monday, I’m the only Canadian in Bangalore… or so it seems 🙂