Skip to content
The Product Development staff at Easun Reyrolle work Saturdays.  That means we work Saturdays too, while we are here.  It was a very busy day, with meetings about both projects and with the Managing Director, Premnath.  A lot of discussion about how to ensure that the products get completed and into the market on time.  That’s difficult, because there are certainly issues that I see that need to be addressed before the products go to market.  It’s a tough message for everyone to handle, because they thought they were very close… but things have been dragging on.  Not that all of the delays have been related to the issues that we see, but certainly these need to be addressed, in order to ensure that the product is successful.

We wandered to the Royal Minakshi Mall for lunch.  Right outside the office, we saw some mangy dogs.  One separate, obviously wary of the other several dogs watching it closely.  As it trotted away, it turned once in a while and growled.  None of the dogs looked happy.  They didn’t look very prosperous 🙁 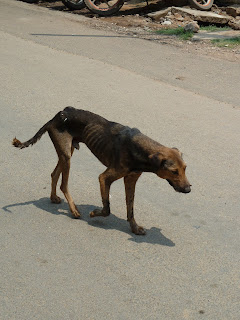 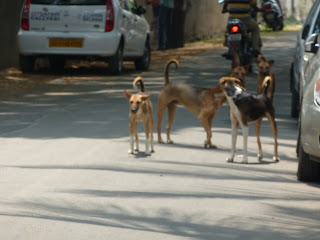 Norbert spotted two monkeys in a tree, about 20 yards away.  Nobody else even noticed them, but it’s a bit of an unusual sight for us.

After passing through the industrial area, there’s a residential area, then a wide open space with a huge school across an open area.  The path here is difficult to describe as a road – it’s pretty rough.  We saw cows grazing on the garbage.  Yes, that’s a common sight here – there’s enough garbage in the streets for cows to live on.

So, here’s the mall.  Big, clean, and modern.  Quite the contrast to the cows grazing beside an abandoned building, only 200 yards away. 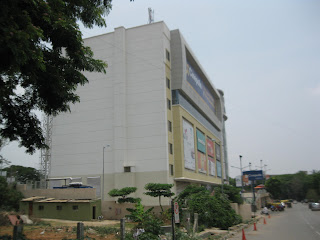 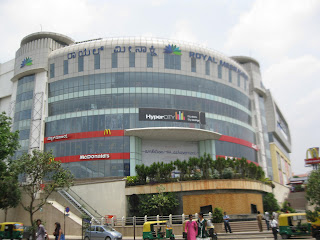 As we got back to the office, our monkey friends were much closer, on the fence along the road, and we got better pictures this time. 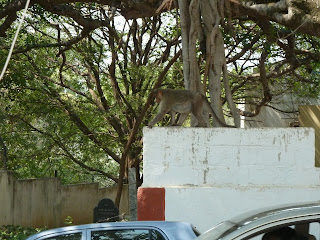 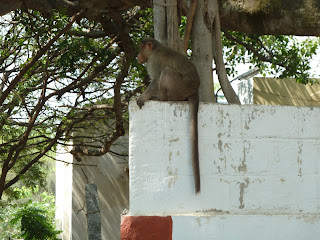 Ramu arranged for a trip to Mysore for us tomorrow, Sunday.  Mysore happens to be his hometown, so he was anxious for us to see the sights there.  The Mysore Palace is second only to the Taj Mahal in all of India, he tells us.  The catch?  It’s 150 km each way, and we have to leave early because it’s a 3 to 5 hour drive each way.  7 AM early, on a Sunday!  Ouch, my head hurts already 🙂  And, since Norbert flies tomorrow night (well technically 3 AM on Monday morning), we have to be back in decent time, so he has plenty of time to get to the airport, in spite of whatever traffic challenges there may be.   We need to be back by 8:30 or so, at the latest, as he heads off at 9 PM.

We left work a bit early (4:30 PM), went to the Central store / mall again (1 km east from the hotel), where Norbert hoped to get some more of Danny’s planes.  Success!  Danny’s son was on duty, and we bought a bunch more packages.  Norbert was pleased – his wife’s schoolroom is going to be full of excited kids, flying planes around the class like crazy!

Darshan went down to the Gopalan Mall (roughly 2.5 km east) right after work, and picked us up two tickets to “Iron Man 3”, dropped them at our hotel.  So, we went to Gopalan Mall for dinner – ended up at KFC, was most appealing place – and hung out until the 10 PM late show.  Wow what a noisy mall.  I guess it was a Saturday and all. 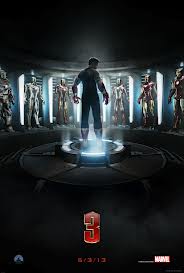 Well, you know me, Mr. One Eye – but it wasn’t bad at all.  I had to put my prescription eyeglasses on underneath the 3D glasses, and that was a bit awkward, but overall OK.

“Iron Man 3” was OK, but I haven’t seen the first two, so some of the inside humour was lost on me.  The movie was pretty full – I would imagine about 400 people.  It was the second night of the movie showing here.  It didn’t debut at home until a week later, ha ha.

Anyway, the movie was clicking along, then suddenly the screen went blank, and a few seconds later the lights came on.  A malfunction, curses!  I said something, but nobody else seemed upset.  In fact, many got up and wandered out of the theatre.  Well, what do you know?  An intermission!!!  Brilliant, to get folks out to the concessions.  A few minutes later, the lights dimmed without warning, and the movie resumed.  Wow.

Afterward, we had to file out through the back exits.  Down the hall, there was a guy collecting the 3D glasses in a box, and giving out 100 rupee notes for each one.  He saw that Norbert and I were together, and pretended to give me 2 x 100 rupee notes, but somehow only one 100 rupee note ended up in my hand.  The crush of the crowd pushed me down the hall, and there is Norbert, holding out his hand, trying to get the second 100 rupee note.  Well, he was persistent enough, he finally got it.

By this time it was 12:30 at night, and we just didn’t feel like walking the 2.5 km back home – oh, and remember we have to be up early.  There were dozens of auto rickshaws in front of the mall.  We decided that we’d take one.  Yikes, I always thought those things looked dangerous.  Oh, well.  150 rupees for what should be a 10 or 20 rupee ride.  Oh, well, again – remember that it’s 50 rupees to the Canadian dollar, so we’re talking CA$3.  Later I was told that the price goes up substantially after midnight.

What a ride!  Like a minibike with no muffler, a rough ride, bounce bounce bounce, and the side bars aren’t much to hold onto.  I was petrified.  Good thing the road was deserted!  We had a motorbike and a car pass us, and both kind of appeared out of nowhere, beep beeped, and swooshed on by.  Fun fun!  We survived, and got back to our hotel in time to crash around, oh, 1 AM.  Tomorrow will start early, like around 5:45 AM.  Ouch.

I was going to have a shower before bed, but there was no hot water.  Enough of that noise, no need for a cold shower these days 🙂