Skip to content
Norbert went to the office, the boys (a reduced crew) picked me up and we went to the lab.  Unlike Monday, things really clicked.  We got very methodical, with Manikandan entering results directly into a spreadsheet, me dictating which test was next, and focussing on only one test, leaving the rest for later.

Lunch was at the Hotel Nandhini, known for its food from the Andhrea region of northern India, apparently acknowledged as being the most spicy in all of India.  Yikes!  Non vegetarian.  Yes, it was hot & spicy, but it was also very tasty, excellent!  I couldn’t understand what Manikandan told the waiter, I think maybe they toned it down for me.  Nonetheless, I am really enjoying this Indian food.

In the afternoon, we had victory after victory, pushing the performance of the unit up and up.  In the last hour or so though, we fell flat on our face – even when we “undid” recent changes, we couldn’t get back to where we were in the afternoon.  It was appropriate to break at that point.

So, in India, they like their tea.  They break for tea in the morning, and in the afternoon.  Each day, when the others had their tea, I would fuss about, sometimes reading, sometimes pondering the challenge at hand.  Well, they needled me enough, that I decided to have some tea – black only, of course.  What do you know, it was great!  So from then on, I drink black tea with the guys, each time.  Hard to believe, huh?  Those of you who know me, know that I don’t drink coffee or tea, as a rule.  Well, it’s true!  Here’s photographic evidence: 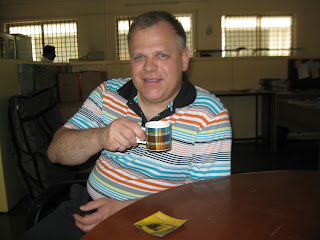 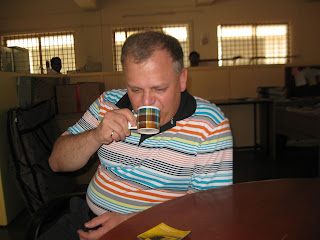 The ERL management team took Norbert and I out to dinner at an interesting restaurant – The Barbeque Nation.  Here, there are large square holes in the centre of the table, where the waiters carefully set in open grilles full of hot coals.  You can feel the heat as they lower it into the hole with big hot pad mitts on.  Then they bring pre-cooked skewers of different foods and set them into slots on the open grilles.  You can eat as much as you want, they keep filling it up.  We ate, drank, and were merry, but when we were full, our fearless leader advised us that this was only the appetizer round, and that the buffet was next!  Oof, again.  I had a polite, small sampler of several of the dishes, and pushed back from the table.  Overall, a good time was had by all.  We also consumed no small quantity of red wine.  Generally, this is a noisy restaurant, and I think I know why.  No screams of pain from burns though, and that is impressive 🙂

Needless to say, when I got back to the hotel, I could do little more than crash.

We knew that we had to work on Saturday!  Yikes.