We decided that a nice walk was in order, to see our surroundings.  We walked out of the hotel and headed straight east into a different world!
We had been warned that the traffic was so busy at all times, day and night, that we wouldn’t even be able to cross the street.  Bah!  There is a large intersection right to the east of the hotel, Marenhali Rd and 11th Main Rd.  Mind you, it was a bit hair raising – they seemed to barely respect any rules, let along rules-of-the-road as we knew them.  We got across nonetheless.

We were greeted with signs, sounds, and smells unlike anything we ever saw in Winnipeg.  There were little shops of course – many, many shops – and then there was the shanty town. 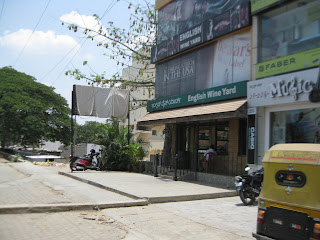 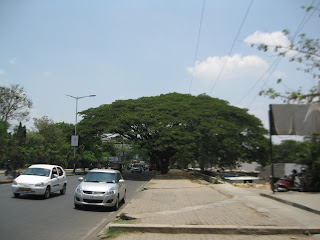 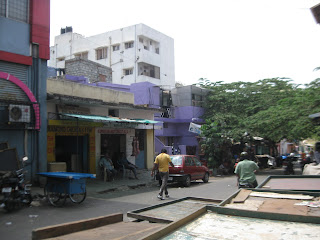 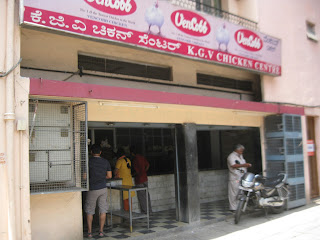 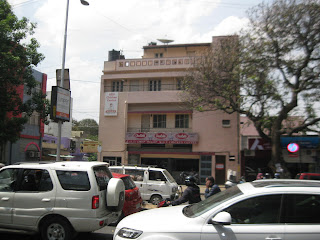 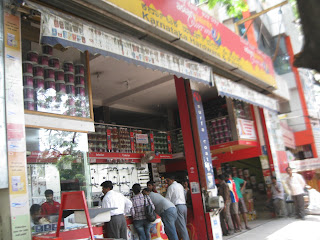 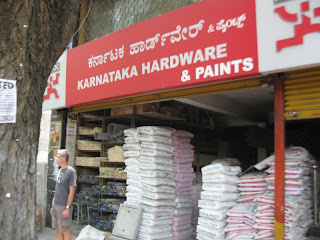 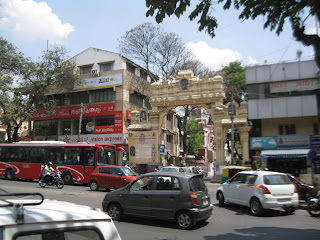 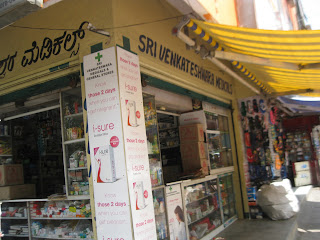 About a block east of the hotel, there is a steep drop off of about 6 feet beside the sidewalk – the whole block to the right is dropped down about 6 feet, actually.  In that area, there are two rows of ramshackle shacks – slums – in which people obviously live.  Yikes.  Corrugated tin roofs, doors and walls cobbled together from scraps.  Just like in the movies.  Everybody walks by, but nobody seems to notice, or at least, to care. 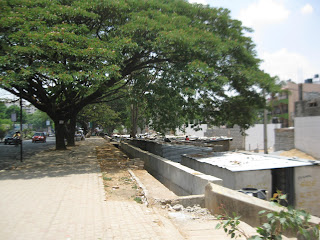 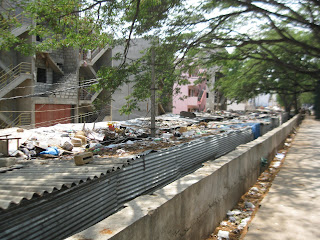 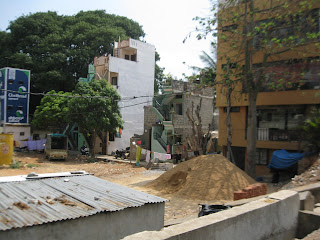 We came across a Honda motorbike dealership, a large electronics store (India’s answer to Future Shop?), and a large department store called “Central”.  We wandered in Central and had a look at the prices.  I bought a belt.  We wandered up to the food court and had some gelato.  Did I mention that it was a hot, hot day?  Something like +37 deg C.  Wow.

On our way down, we noticed a display with a fellow throwing a paper airplane that would always circle and come back the thrower (like a boomerang).  It turns out that this was Danny’s Planes, and the inventor was there himself selling his product.  He was not connected with Central but was renting a small area in the store.  Intrigued, Norbert and I each bought a few packets – Rs50 each (approx CA$1 each) and each packet contained 4 planes.  Later, Norbert told his wife about them, and being an elementary school teacher, she was quite enthused to have one for every child in her class, so we had to find time to go back.

We walked a few blocks further, then wandered back.  While wandering, we saw a sugar cane press along the sidewalk.  Check out this video:

We were tired, so we ate at the hotel restaurant and crashed.  Of course, neither one of us slept well that night – waking up at odd times, wide awake, not being able to get back to sleep.