Well, today started lazy enough – I was slow to get going.  Actually, both Dayna and I were, but, as usual, I win the prize.  The four of us finally got out the door at about 11h00.  We caught the same bus that brought us here from Puerto Vallarta – these buses, which already bring you a long way for the ridiculous cost of 12 pesos a person (right around a dollar), actually run alternately up to Villella and to Sayulita, something like another 3/4 hour.  Well we were lucky enough to have a Sayulita bus waiting for us as we arrived at the stop on the highway.

The ride was, um, interesting.  Shortly after leaving the populous area of Bucerias, the road went down from 4 lane divided to 2 lanes, and snaked through the mountainous jungle.  It reminded me a lot of the drive up number 10 highway through Riding Mountain National Park, but of course with very different vegetation.  There were beautiful mountain streams, clearings where you could see the treed sides and tops of the mountains, and curve after curve after curve, as the road followed the passes and the streams.

The bus driver shifted down, then down again, as we climbed in the jungle.  There was a lot of traffic, including big trucks, other buses, passenger cars, and much more.  Then, descending the other side, it seemed we were going a bit too fast – but hey I’m not a thrill seeker.

We arrived in Sayulita, and all the Mexican folk on the bus got off.  The driver looked a little perplexed, then we realized that the bridge ahead over the river was out – we weren’t going to get to the other side unless the bus started to fly!  There were about a dozen other gringos remaining on the bus too, and we had a good chuckle as we got out.

There was a temporary footbridge over the river, good thing – because cars and trucks were forced to drive through a “ford” crossing right through the water.

As we crossed the bridge, we were solicited to donate into a can for some cause that I didn’t understand, and declined.  This was the beginning of about five different people in different places, asking for money with a can.  One of them said they were asking for an orphanage.  If I knew it was legitimate, I would contribute, but as it stands, I didn’t.  I don’t know if I should feel bad or not.

We wandered down to the beach in Sayulita.  Barrie advises that was significant damage from a huge storm that rolled through this area in August, damaging the beach severely.  Rather than a gently sloped sandy beach to the water, it left a low spot parallel to the shore, where a slimy scummy pond has been created.  At two spots, a sand bridge has been made, with gaps to let the water drain.  At one end, a fellow was digging a trench to the water, allowing the pond to drain.  Well, actually, since the pond is in sand, the water should drain if it’s above the normal level of water at the shore.  Since it hasn’t drained through the sand, it will be futile to try to drain it with a trench.  Too bad.  The only way is to move the sand back to slope the beach properly – either by machine (probably not feasible) or by the action of wind & waves (which may take a year or two). 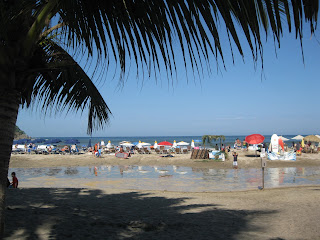 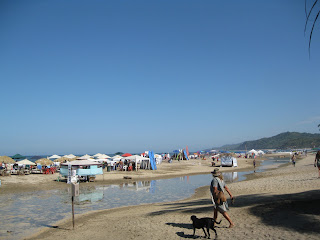 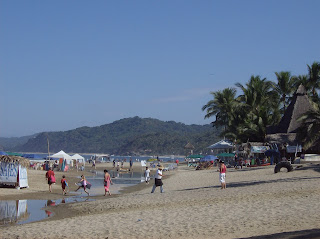 Nonetheless, there was an eager class of surfing students waiting to take to the waves.

We made our way to the shore by way of one of the sand land bridges.  The waves really were strong, frothy, and consistent.  I haven’t surfed (yet), but I can only imagine that it was ideal for surfing. 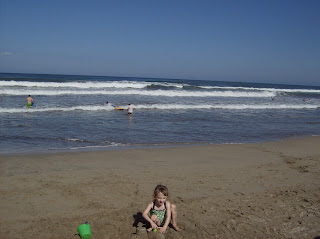 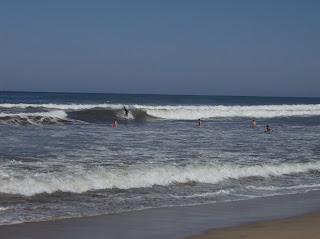 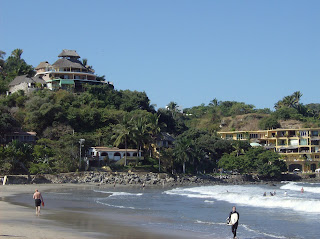 There are lots of umbrellas along the shore with folding chairs under them.  Hmm, we thought we might sit down and enjoy the shore for a spell.  However, we noticed that the umbrellas have numbers on them – and we saw waiters wandering between them.  They are an extension of the bars on the other side of the pond – you are expected to buy drinks and/or food while you sit there.  Oh, well. 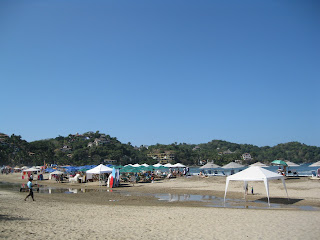 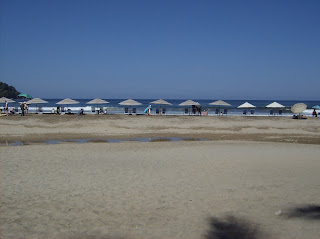 We wandered down the shore then back across another sand bridge and back to the streets.  We perused a couple of restaurants before deciding to go to Chocobanana – where apparently the namesake dessert is both nutritious and delicious!  Behind the counter, they had a hilarious sign – check it out – complaint department, take a number!  Ha ha!

The Chocobanana restaurant did up a great mushroom & cheese hamburger for us.  Includes salad & fries, but the salad was in the hamburger.  That’s OK, it was great, as I said.

Then I ordered the namesake Chocobanana.  There are different types, I got the one with coconut on the outside.  Sure enough, it was a banana (previously frozen?) with a thin chocolate coating, and covered in flakes of coconut.  Well, it was good, but not quite out-of-this world or anything.

We wandered the streets of Sayulita for an hour, then back onto the bus. 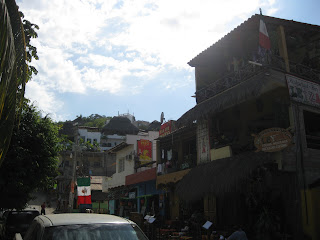 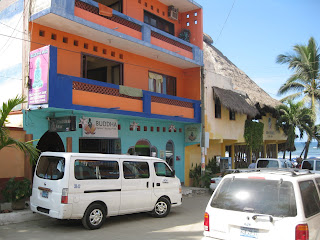 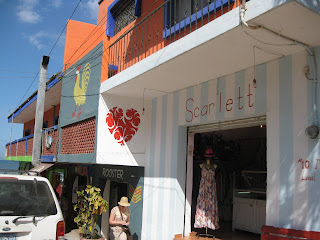 All too soon it was time to get back on a bus.  Amazingly, as we got to the place where we got off the bus into Sayulita, a bus arrived signed for Bucerias.  We got on and grabbed the choice seats.

It was a nice ride back, especially since I didn’t have to stand the whole way!  The bus never did fill up, probably less than a dozen people on it, so we were able to relax and not scrunch together.

The bus was moving quite quickly, so I wasn’t able to snap any great pictures, so sad.  Just one of this small church at a village along the route. 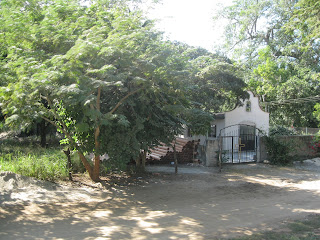 We got back to Bucerias in about 30 minutes.  We crossed the highway and visited the butcher shop, picked up some sausage for dinner tonight.

That’s a bit of a story too.  When Dayna and I visited the Mega on Friday the 31st, we picked up chicken with the idea of storing it to have tonight.  Unfortunately, by the time Saturday afternoon rolled around, Dayna and Helen were searching for the cause of the terrible smell in the fridge – it was our chicken!  Not gonna eat that, froze it and now wondering how to dispose of it – the garbage pickup doesn’t seem to be on a regular schedule around here, so can’t necessarily put it out just before they pick up!  And for tonight, over to plan B – go to the butcher shop and pick up something fresh & interesting.

Fresh & interesting it was.  Bratwurst, yum, made for a nice supper.  And a neighbour lady made “Ohio Buckeyes” and gave us some for supper.  They were grrrreat!  [ I think she prepared them in honour of the upcoming Sugar Bowl football game, where the Ohio State Buckeyes will meet the Arkansas Razorbacks tomorrow night ]

Before dinner, Dayna and I went for a walk down to the Biblio de Gringo bookstore and cafe – yes, that’s the name – specializing in used books in English.  I’ve seen several other bookstores and magazine stands, but everything is in Spanish!  [ go figure ]  Anyway, at the Gringo Bookstore, they sell used books at 1/2 of the cover price, and buy back at 1/4 of the cover price.  Barrie & Helen tell us that they keep track of each person’s credit on a recipe card – and maintain the credit until next year.  So, at the end of your visit, you take down all your books, turn them in for credit, and when you arrive next year, you go down and use that credit to get some books out to read.

Well, I need a book because I’ve plowed through all the magazines I brought with me – hard to believe, but I did – too bad I didn’t bring more (I have several feet of magazines at home to deal with).  Dayna read the two novels she brought, so purchased two more.

There is a relatively limited selection of non-fiction, and I didn’t see any fiction that appealed to me.  I purchased a hardcover book, very old but interesting – Stick and Rudder / an Explanation of the Art of Flying by Wolfgang Langewiesche.  Some day, I would like to have my private pilot license.  I read part of it and it seems to be a really good practical description of how instinct works against you during flying.  Based on my limited experience, flying with Ryan Fisher, and Flight Simulator, the first chapter already has great advice.

After supper, Dayna and I wandered down to see if a sports bar might have the Canada-USA World Juniors semifinal game on.  Well, Yoyo Mo’s had it on, we arrived with less than 2 minutes left in the game, and couldn’t find a seat, so we just stood and watched the game played out.  Canada won 4 to 1, and on to the finals against Russia!  It seemed as though the whole bar was full of Canadians, there was a lot of yelling and cheering.

We didn’t bother to sit down.  Instead we went across the street to Joe Crow’s to see what was happening there.  Not like we couldn’t look across and see that nothing was happening!  Anyway, we stopped for a couple of drinks, found out it was karaoke night, heard the other folks practicing, saw that no Long John Baldry songs were in the book, and finished up.