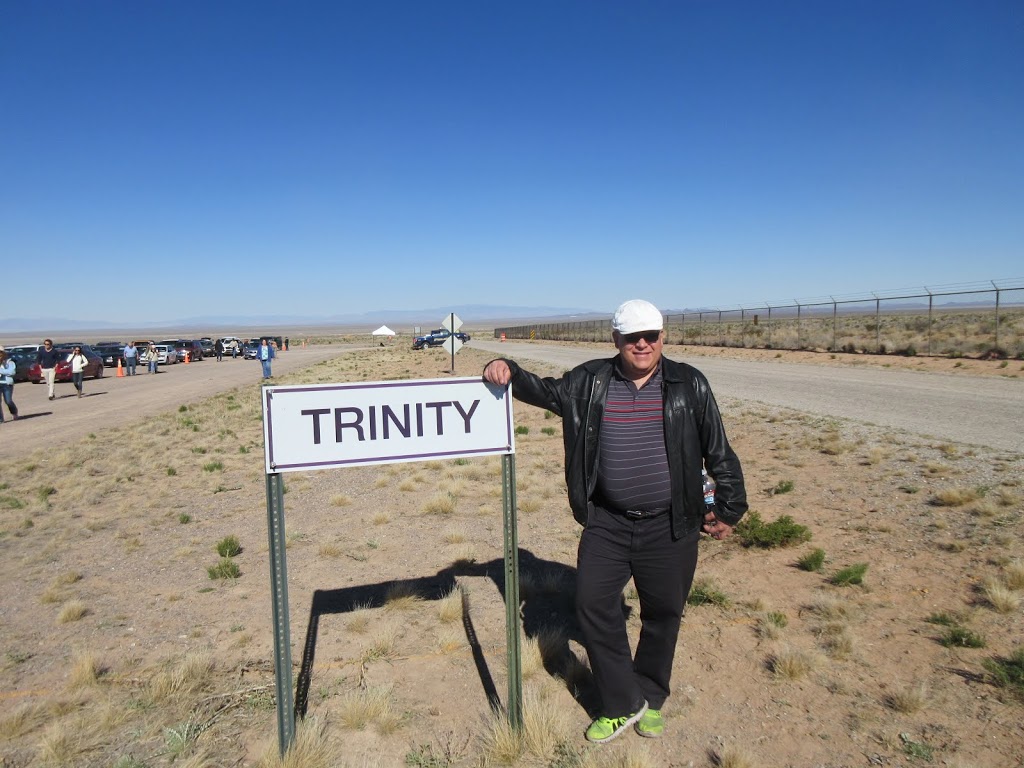 I’ve been repeatedly invited to Albuquerque by Don Bartrip, president of Winmer Technology Innovators, a former customer of ours when Jason & I were at Norscan Instruments.  The Trinity Site, where the world’s first nuclear bomb was tested, in the middle of White Sands Missile Range, is only open two Saturdays a year – once in April, and once in October..  and the NRAO Very Large Array radio-telescope site has guided tours on certain Saturdays.  They coincided (probably not a coincidence), so I went for a drive to visit Don and see them both.

I took Friday off, so I could have lunch with Norbert Wegner of ERLPhase (visiting family here from back home), then make a leisurely drive up to Albuquerque, but alas, it was not to be.  We were in the middle of an installation at SRP’s Perkins Substation, and my part wasn’t functional yet – so I had to drive up and do a couple of hours’ work on my day off.  I had to make a 70 minute drive in about 45 minutes, and still ended up being 15 minutes late.  Sorry, Norbert!  We had a good chat anyway.

Then, off through Peyson, onto Interstate 40, and going east.  And east.  And east.  Just as I crested the plateau northeast of Peyson, my car threw a “service engine soon” indication.  ARGH!  If you know me, you know that I can’t stand a SES light on my dashboard.

The next chance I got, which was Holbrook just before going onto I-40, I whipped out my handy OBD-II bluetooth adapter, plugged it in, fired up my tablet, and got the code out – it appeared to be a temporary “engine too lean” indication, probably due to the change in altitude together with the push of passing on a hill, so I cleared the code and moved on.  Yay! 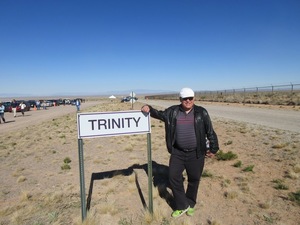 This site is deep in the middle of the White Sands Missile Range.  You turn off the main two lane highway, go down another paved 2 lane road for a couple of kilometres, until you come to a fence and gate, guarded by armed MPs.  They look at your passport and wave you through.  From there, you pass a group of buildings, and head out across the desert.  All side roads have pylons to show they are closed.  There’s the odd vehicle with armed MPs, watching.  You go about 8 km and turn off onto a sand road, and after another couple of km, it opens into a huge parking lot.  There were probably about 1,000 vehicles there.  You walk about 2 km to the actual site, which is about 1/2 km in diameter, well fenced off.  In the centre is a cairn with a plaque, which is apparently at ground zero – where the tower sat on that fateful day in July 1945, that they set off the world’s first nuclear bomb.  They apparently didn’t know how well it would work – or even if it would work – but it put out something like three times the expected energy, and vapourized some recording equipment that they weren’t planning to vapourize.  Great planning went into the work – multiple sets of monitoring & recording equipment at various distances from the blast.  The light from the blast was like a second sunrise when seen from a great distance.  People demanded to know what it was, but the government at the time (and for long time later) just waved their hands and said, “nothing to see here, move along” 🙂  As well they should have, I suppose!

About 4 km away from the Trinity Site is the McDonald ranch house.  All this land was expropriated from ranchers during the war, and this house and its outbuildings were left behind.  The military used the house as an office, a lab, and assembly building.  There are artifacts and displays inside.  Outside, the other outbuildings are gone, just remnants remain.

They have nasty fine sand here.  I dropped my camera, and it started misbehaving.  You will see later pictures where the lens didn’t fully open.  So sad.  I had to spend the rest of the day checking each time I opened the lens, to ensure that I could get an unimpeded picture! 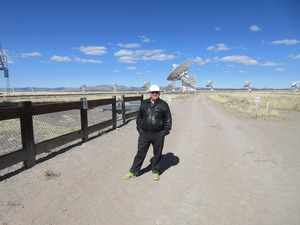 Next, we dashed to the other side of Interstate 25, and onto Highway 60 headed west (yes, the same highway 60 that goes through Mesa and Phoenix, and continues up to Kingman).  From a ways off, you can see the little dots in formation – wow, that’s a big arrangement of satellite dishes!

It turns out that there are 27 dishes, each about 25 metres across and each mounted on a large heavy tripod arrangement and having bearing & azimuth drive.   There are railroad tracks going out in a “Y” formation some 34 km in each direction from the centre.  At various intervals, there are small (10 m?) spurs off the track, and a site pad where a dish can sit on three foundation pads.  They have a special carrier vehicle that goes down the railroad track, puts down its feet, turns 90 degrees to get onto the spur, then goes out under the telescope.  They support the telescope then unbolt it from the foundation pads, pick it up, and (slowly) move back onto the railway track and down to where it needs to be.  Wow.

There are four formations, “A”, “B”, “C” and “D” (how imaginative), where the 9 dishes in each arm are spaced at different distances from each other.  They change the formation nominally every 4 months, and, depending on the distance of the change, it can take up to 2 weeks to change over!

They have a supercomputer (built by the NRC in Ottawa?) inside, that takes the signals from the 27 dishes, correlates them, removes noise, integrates over time, etc., and they come out with images that rival the best visual images from Hubble!  Wow.

The radios used in these radiotelescope dishes are all built & maintained on-site.  They are unique in the world.  Cryogenically cooled, they are low noise and very sensitive.   The signals are brought back to the central computer by low loss cable, which they know the exact characteristics of, and the exact length, so they can compensate for everything when they do their calculations.  Cool. 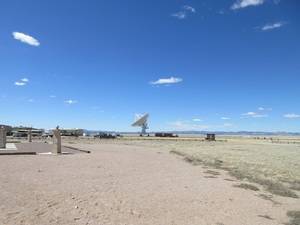 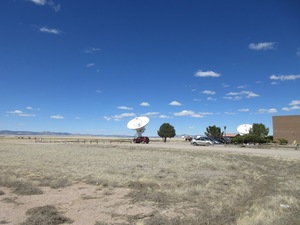 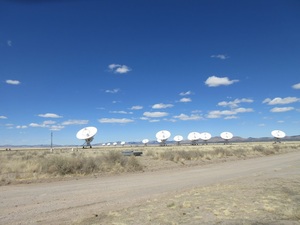 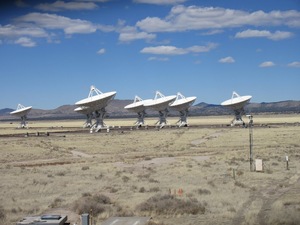 They do observations 24 hours a day, 7 days a week.  In pre-Internet days, researchers lived on-site during their observation period.  Now there’s just the bare minimum crew out there, keeping the system going.

Time slots for observations are assigned on a merit basis.  You don’t have to be some high end scientist to get time on the system.  They schedule the observation, and then queue them up on the computer.  Often they are 1 or 2 hours each, but can be more or less.  The on-site supervisor makes the final call, perhaps adjusting due to weather or other circumstances.

At the end of the tour, we went out and stood under the closest dish.  It was huuuuge!  As we stood under it, an observation changeover occurred.  It was wild, seeing these huge dishes moving (almost) silently, all perfectly choreographed.  These dishes are no slouches – I would estimate that it takes 60 to 90 seconds for them to go 180 degrees rotation, or from full low azimuth to pointing straight up.  Pretty impressive. 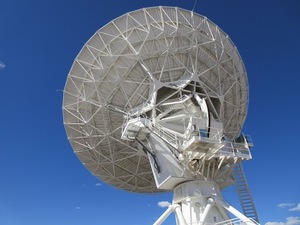 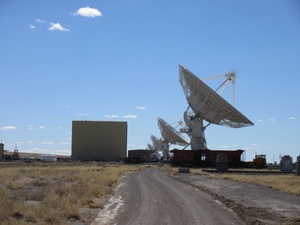 On Sunday morning, Don and I did lunch at Hello Deli, a one-of-a-kind nice little breakfast & lunch spot.  Then we dropped by his office, Winmer, which brought back memories of the last time I was here, I think it was 2009. 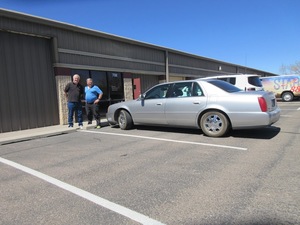 I stopped a few times 🙂

Don told me about the airway beacon system from the 1920s, and that there was one at the air museum at Grants Airport.  So, I stopped by!  Cool.  The museum was closed (Sunday afternoon, after all – and actually it’s open once a week), but I wandered around and stood at the base of the replica tower. 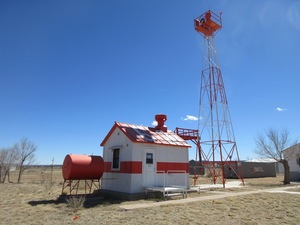 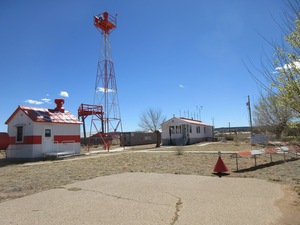 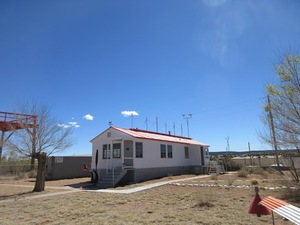 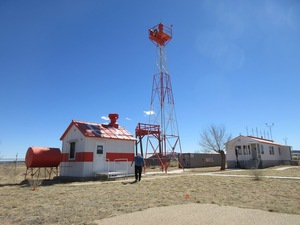 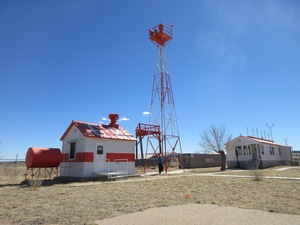 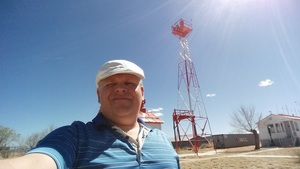 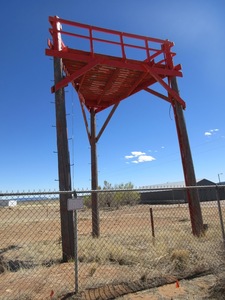 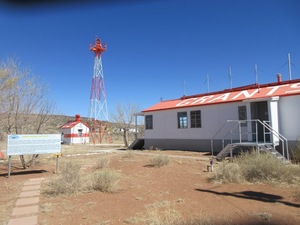 Standin’ on a Corner in Winslow Arizona…

Yes, it is interesting how a pop song, itself a product of culture, can influence culture in a feedback loop… oh wait, that’s the engineer in me prattling on again 🙂 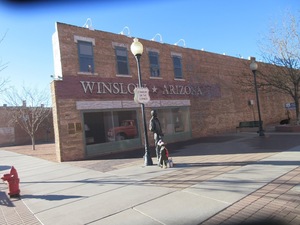 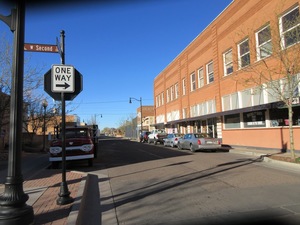 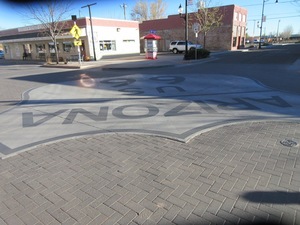 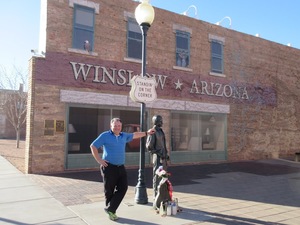 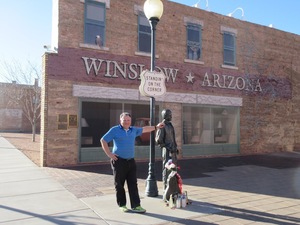 There were people showing up constantly to take pictures and get their picture taken.  A beautiful blonde lass with an Aussie accent agreed to take my picture.  We chatted briefly, she was finishing up a bit of a road trip with her (much older) lady friend, going back to Denver and from there back to Australia…  Hmm, too bad that I was going west instead of east.  Oh well, I’ve got other issues to deal with 🙂

Yes, there’s a meteor crater not far west of Winslow.  I knew that it had closed at 5 PM, but I figured that I’d stop by and see it anyway.  Nope.  I went about 8 km sound on a narrow 2 lane paved road through a cow pasture (yes had Texas gate to enter).  Had to stop to let some cattle cross the road.  Then I crested a hill…  and saw the crater’s rim standing tall in the desert.  It was obvious that it was laid out in such a way that I wouldn’t see anything without being there when it was open.  Unfortunately, I didn’t take a picture of the crater rim from the outside – should have 🙂

Then headed west toward Flagstaff, and south to home. 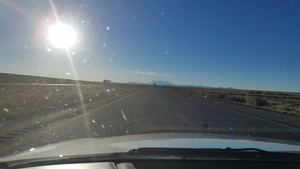