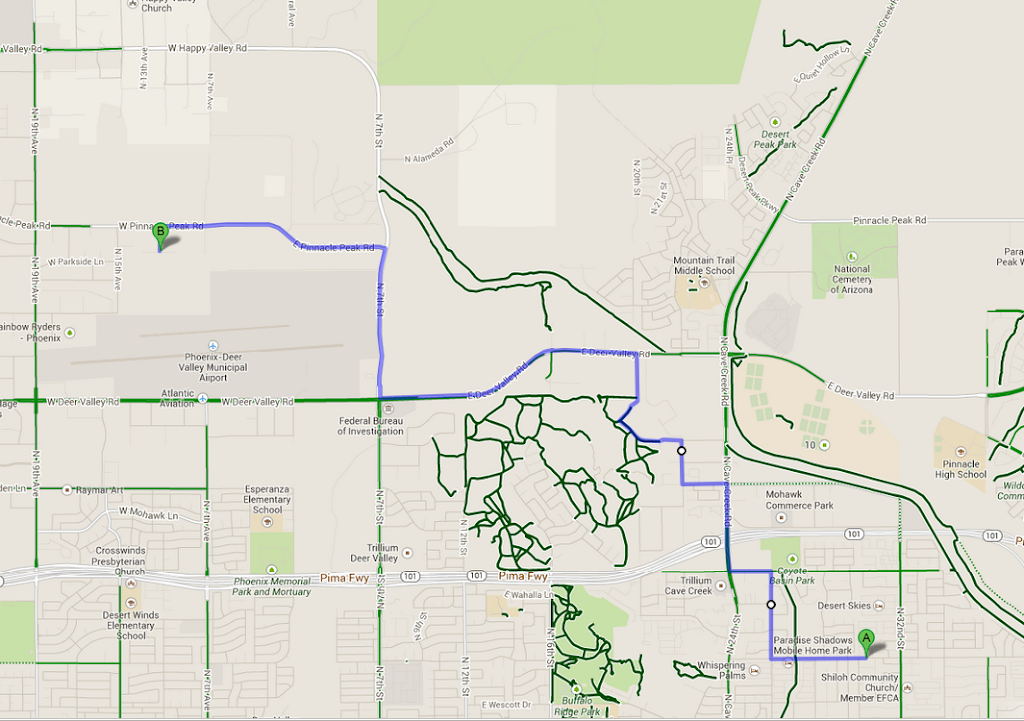 Part of the reason why I’m here is that I can cycle to and from work in the wintertime.  Now, I’m hoping to cycle all year ’round, but I have been warned that the extremely high temperatures here might make that a bit… um… dangerous (no freakin’ kidding, I got here last July, and wow!).   Once I start losing serious weight, I will be in better shape to cycle during the heat, shall see.  I hope so 🙂

Anyway, so for now, I am cycling about 6-1/2 miles each way.  There are two off-road segments not properly shown on the map – one where I cycle the path along a canal, and one where I cut through the desert to avoid Pinnacle Peak Road and its traffic, and save about 1/2 mile of riding.

The path along the canal is not much fun – it’s a track for vehicles… but not normal vehicles.  It’s very stony and up & down.  It seems like they made an embankment along the canal, and that’s what I cycle on.

Once just before Christmas, on 18 December, I spied an easier route on the other side of the canal.  Much less up and down, it held some promise.

The trail showed signs of some use, although not much.  It had a fence on either side, no worries.  It turned out to have some seriously stony patches, so had to dismount a couple of times, but still was nice to ride on.  I got to the other end, had to navigate a bit around a few trees, up a slope, and guess what I came to?  A locked gate!!

Well if that didn’t give me a sense of deja vu from so many years ago, ha ha.  Remember the story of the barbed wire topped chain link fence at A. I. Dupont research campus in Wilmington, Delaware, on my very first business trip in 1984?   Hmm, a story for another time 🙂

Yup, so anyway, had to backtrack the full 1/2 mile over the stones, etc., and cycle the other side anyway.  Learned my lesson on that one.  Or did I?

On 27 January, I decided to try the route that Google maps shows – some kind of a trail that cuts off and saves the whole beside-canal thing altogether.  It turned out mediocre-to-OK.  The jury is still out on this new trail – it’s kind of rugged and loose material in spots (makes for difficult cycling), so I’m using it for now, but considering whether it’s worth the effort.  And – oh yeah – there’s a nasty dog along the way – but the yard is mostly fenced in, and he doesn’t see me until he’s corralled behind the fence and can’t get to me.  Heaven help me if he sees me coming and takes the long way around!

On the way in on 27 January, I had a few exciting moments.  First, at the stoplight on Cave Creek Road at the underpass of the 101 Loop freeway, I was waiting at the red light when an ambulance came toward us.  Since the traffic was stopped, it couldn’t get to the intersection.  It bounced out into our side, which was no problem because most of the traffic had stopped…  well, no, they hadn’t – and the ambulance ended up nose-to-nose with a lineup of cars coming down off of the freeway and turning to head north on Cave Creek Road.  They sat face-to-face for a bit, two rows of traffic blocking the ambulance, when finally someone in the second lane cleared out, and allowed those right in front of the ambulance to cut to the right.  Just about that time, the light came green for the traffic facing us to turn left onto the freeway, cutting across in front of the ambulance.  In spite of full lights and siren, the front car in the innermost lane pulled out to turn as the ambulance entered the intersection.   It blocked the ambulance!  With the horn blaring and siren screaming, the driver froze, blocking the ambulance from getting anywhere.  For over 20 seconds, the driver sat there.  Then tried to move to the right, as the ambulance tried to do the same.  Then tried to move to the left, as the ambulance did the same.  The entire intersection was empty, everyone else was stopped, but this driver was petrified.  After at least 30 seconds, finally the driver moved their car just enough that the ambulance could pass.  I sure hope that it wasn’t a fatal error on part of the driver.  Yikes.

Two blocks further up, when I went to cross the street (to enter the trail beside the canal), I had an opening in traffic and zipped across through it… but for some reason my rear wheel came loose and jammed against the frame of the bike.  With the traffic bearing down on me and the bike in too high of a gear, I just put my leg into it and powered across the opening, just in time.  I took the bike aside and realized that the quick release for the rear axle had come loose.  I tightened it and proceeded.

At the other end of the trail, I have to cross traffic again.  Everything was going fine, until I was in the centre of the road, trying to get across the last few lanes.  As I went to power through the gap in traffic, it happened again – but this time it jammed firmly.  I powered across the first lane and half the second, then had to jump off the bike and carry it across the rest of the way.  Fortunately, there was only one pickup truck coming, and the driver saw me and steered around.  It wasn’t all that close a call but it was a bit stressful.

It turns out that the cause of all this was that the derailleur had come loose and was working its way out.  I pulled out my tools (thankfully I have them 🙂 ) and fixed it.

Speaking of which, my backpack isn’t as heavy as it was a month ago – it sure is nice since my new work computer arrived.  From early August until early January, I was bringing my personal notebook computer back and forth every day.  When driving, that’s not much of a chore.  But when riding a bike, that extra four or five pounds was annoying – good for me, I’m sure, but it’s a lot better now that I don’t have to.  The tool kit is only a couple of pounds, so not that bad – and much more useful on the trail 🙂