Skip to content
I went to church on the 18th.  I was feeling down.  Things just weren’t feeling good.  I am so far from home, in a foreign land, by myself…  alone…

After church, I asked Pastor Paul Self-Price if I could come see him some time during the week – he of course agreed, and said Tuesday morning would work.  We chatted about therapy and Emotions Anonymous – which he had never heard of, but asked if it was like Alcoholics Anonymous…  which of course it is very much like.  He has been in AA for over 30 years, so I knew that I was talking to the right person!  I mentioned that I had had trouble with the 5th step and now having trouble with the 9th step, and of course, having been in the program, nobody has to remind you what the 5th step is… or the 9th.  Yes, I will be talking to the right person.

They were having a luncheon get-together after the service, and I was invited to stay.  Of course, everyone was so gracious, and tried so hard to make me feel at home… but somehow, by the time I left, I had to run (not walk) back to the condo, to be alone in my misery.

So Sunday afternoon, I hit the bottom.  I was feeling low, so far from where I want to be, moved so much, lost and given away so much, not even knowing who the Hell I was any more.  I’ve lost my touchstones, relationships.  Given it all up.  Moved.  Moved back.  Then given it up again.  Moved away.  And now I am here.  Is this supposed to be better?  I tried to read, but could not.  I tried to watch a couple of movies – a sci-fi movie, even Casablanca – but could not.  I tried to surf the web, look at news, blah blah…  Nothing worked.  Yikes!  I flopped in bed, looked at the ceiling, and pondered… and cried.

By Sunday evening, the darkness had started to lift.  Thankfully!  I do not want to be there again.  Not that this is any surprise, mind you – but there is no need to revisit this place.

I went to see Pastor Paul on Tuesday morning, on my way to work.  It was very helpful.  He understands much more than I might expect, at least initially.  It generally helped to buoy me up, and I felt much better.

At the Emotions Anonymous meeting on Tuesday evening, there was some crosstalk about my situation.  One of the other members called on it, and I was placed in the uncomfortable position of having to jump in and tell them both that their input was appreciated but unnecessary.  I will move forward in the program when things settle enough that I can find my stuff and move forward in the program.  Not entirely satisfactory for them, but damn it, it’s my program, not theirs!  Yeah, I’m probably over reacting, it wasn’t nearly that dramatic.  I need to get moving, not change direction… again.  I can… and I will.

Skyping with mom and Eric on Wednesday was nice.  Mom is flying out to Alberta on Saturday to see James and his kids for a week.  They are all going camping (yikes 🙂 ), shall see how that works out.
I slithered through the rest of the week without incident.  Well, found out that Autopac will cover my windshield replacement, have to pay my $200 deductible (in US funds, waa waa), so scheduled it for Monday.  They come to me, and do it in about an hour, apparently.  Wow.

On Saturday, I went to Apache Reclamation and Electronics, south of downtown Phoenix.  It’s in a rough part of town, obviously hit hard by the recession of these past few years. 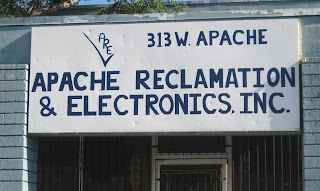 Anyway, the shop was amazing and fun!  It would not be if I wasn’t into electronics, mind you.  Narrow isles full of dusty, dirty electronics of all types – surplus parts, new parts, circuit boards pulled from electronic assemblies, power supplies, test equipment, specialized old equipment, computer equipment, some just plain junk.  If you wanted to make up a sci fi movie set from the 1950s, you could do it here!  I tell you, they have everything!  There’s even a full room of shelving units chock full of many vacuum tubes.  I even held an 807 tube in my hands, the type used in my old No. 19 set… wow.  I almost bought it, just to mount it and put it on display as a memory of my old hobby… perhaps next time.

Anyway, it was a cool place to visit.  There was an older, retired fellow there who was working on a little project to recondition his car batteries – a line-powered capacitively coupled de-sulphur device.  Sounded dangerous!  I gave him a bit of advice – including to put a high resistance across that big motor run capacitor that he was holding, so it didn’t electrocute him – and to use a big monster bridge.  He asked about putting a fan operated from the output, perhaps using that cool LM7812 regulator to run it – which I dissuaded him from doing.  I’ve burned up a few LM7812s in my time, by not putting proper decoupling… plus it won’t take the extra high voltage for a open (completely failed) battery, or when the battery isn’t there and the thing “accidentally” gets turned on…  I think I gave him good advice, and stern enough warnings to be careful.  Well, hopefully he didn’t electrocute himself or blow anything up.