Skip to content
The week running up to our departure was a really hectic one.  I met with so many people, said my goodbyes, and shed a few tears.  You would think I was never coming back!  Well, of course I will come back, but this represents such a big change for me.  I keep telling myself, “change can be good, this change will be good!”  Somehow, the little tremor in the back of my mind is, “how well will I cope?”  Time will tell.  Of course, I’ve never completely crashed and burned, have always managed to survive, but there’s always this little doubt…

I worked at ERLPhase up to and including 08 July.  The fact was, I was supposed to be done on Friday, 05 July, but I spent so much time dealing with move related stuff in the 2 weeks prior, that even with the extra time I spent in India, etc., I felt the need to come back for an extra day.  Which was good – I was able to finish a few important things.

I managed to have the locker empty on Sunday, 07 July, so I didn’t have to pay the extra month, yay!  There were 15 bins at my mom’s place now, but 13 of them were going into the cars, 1 was going to Eric, and only 1 was staying.  This was a big improvement from the 70 or so bins that were there only six weeks before!

ERLPhase management agreed to let me work with the good folks in India on a part-time “as available, as needed” basis for the next few weeks.  They would keep my E-mail account active to facilitate communications – I would use the MS-Exchange webmail client, and Skype, to keep in touch.

Unfortunately, the contract IT person didn’t get the memo, and on 09 July, he cancelled my account.  I asked for it to be reinstated, which began a 3 day slow dance where reinstatement was performed using a trivial everybody-knows-it password, then failed attempts at updating to a private password.  Well, in the end, we were thwarted by a recent change to the wireless which moved it to the outside of the firewall, ugh.  Fixed, new private password implemented on Thursday, just in time, ugh.  A good way to waste a few hours and a few trips to the office.  Anyway… all fixed, all good now.

I was driving the ’57 as much as possible that last week, just to give her a bit of exercise and make sure I was comfortable with the way she was running.  I had a bit of unease about the RPMs she was turning at highway speeds, and wondered if she was reaching up into 4th gear.  I just wasn’t sure – it has been a long time since I put some real highway miles on a Cadillac of this vintage.  I wasn’t sure about the 1-2 upshift, it seemed as though maybe it was there, maybe it wasn’t – and if it wasn’t, then I was in 3rd at highway speeds, which would not be cool.

Thursday morning, I took the ’57 in to Bob Degraves of Seven Oaks Transmission, to have him give the transmission a quick check.  He and I took the car for a spin, and sure enough, all four gears were there.

He pulled it into the shop to pull the dipstick, and wow, the engine had a knock!  Yikes!  He snagged his stethoscope and figured that it was central in the engine – not from either side – so probably not a lifter.  It sounded low down, perhaps a crank bearing or a connecting rod bearing?  Well it sounded bad, but it went away when we stopped and restarted the engine, so I figured it might just be a transient issue.  Little did I know….  [ cue the ominous music ]

On Friday morning, I transferred the registration of the B.U.T. and the flatdeck trailer over to my mom, since when I change my driver’s licence to Arizona, I won’t be able to keep it registered under my name.

But then, we changed our minds, and arranged to leave on Friday, 12 July, so we could drive to Grand Forks and see the races that evening, stay overnight in Grand Forks, before continuing onward on Saturday.  The World of Outlaws Late Model Stock Car races were going on, and Eric really wanted to see them.

Then, it turns out that the Half Moon’s 75th Anniversary celebration was on this particular weekend 13 & 14 July, and I kind of wanted to go there with the other members of the Manitoba Classic and Antique Auto Club (MCAAC) and check it out.

Also, there was a Winnipeg Blue Bomber football game on Saturday evening in Hamilton, and we certainly wouldn’t be able to pick it up on radio in the U.S. while driving.   Well, I have a US T-Mobile SIM for my cell phone, and could get it using Internet radio on the data network, but no such luck for Eric.

We figured that we’d go to the races on Friday in Grand Forks, then come back late Friday night, spend Saturday back in Winnipeg, and get rolling on Sunday morning.

However, the US immigration lawyer got all out of joint with this idea, saying that I might be denied entry into the US because I would be violating the terms of my TN visa – that is, going into the US for a reason other than work.  Ugh!  I told him that if he understood how often we hop across the border for shopping and entertainment, it’s ridiculous to think that it would change just because I had a TN visa.

In the end, we decided not to go to the races.   There was a lot of rain that day, and with the prospect of it causing trouble with my immigration and TN visa, we just decided against it.  So, I spent the time organizing my bins and running around with last minute stuff.

The running around continued on Saturday, as I put the B.U.T. out to pasture in Warren, dropping off some bins into the storage shelter out there, and picking up a couple of small items.  Oh yes, and then the shelter had damage from falling ice last winter, so I put a tarp over the damage.   Mom picked me up, we raced into the city, where I had a bit of banking to do at RBC, then snag the 57 Cadillac and off to the Half Moon.  I was a half hour late – ugh, I thought I was doing better than that these days!!  Oh well, it was a very busy place, lots going on, and the Caddy looked good. 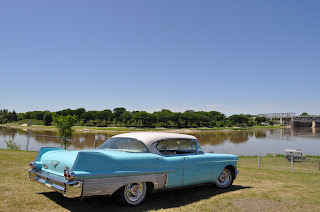 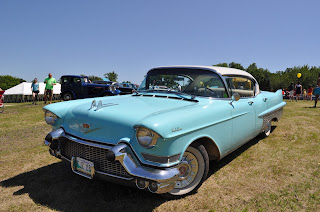 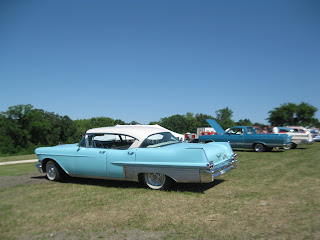 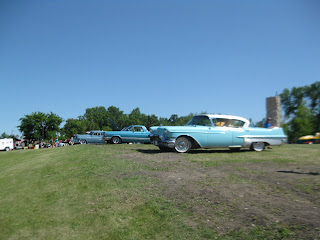 I chatted with a number of folks.  Denise and two of her sons came by and checked it out.  A bunch of the antique auto club guys shook my hand and said, “see you in the wintertime!”  I was parked next to an Amphicar, which generally gives rides in the water for charity (unfortunately, the water was low so the docking wasn’t suitable for it, and the current so swift that it was dangerous anyway), and we had a good chat too. 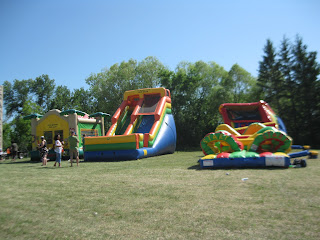 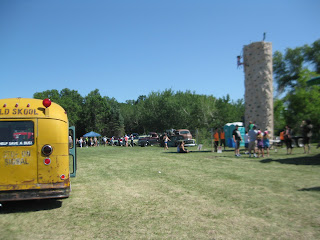 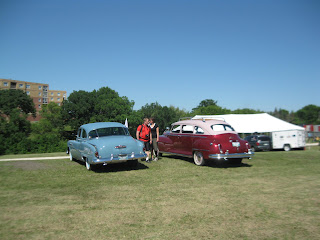 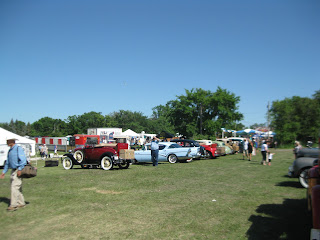 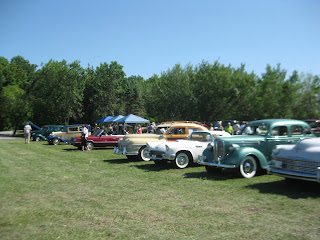 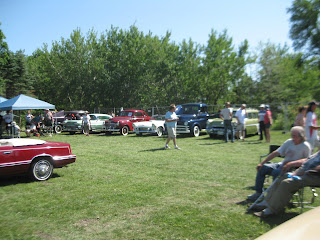 It turned out that Wayne Doherty, a good friend from high school and university, was back home for a couple of weeks, just ending a weeks’ stay at Victoria Beach before heading into Winnipeg for several days.  He connected with me by text and was astounded to hear that I was leaving the next day.  He came by the Half Moon and we had a good visit.  It was great to see him before heading out.

Back to my mom’s place, where I finished rationalizing the contents of the remaining bins.  Then, with a storm coming in and the threat of an early morning thunderstorm, I loaded up the cars, and made up a manifest of what was in each car, in case the folks at the US border asked.  I wanted to know exactly the nature of the contents of each bin, so they could ask and I could tell them.