Skip to content
So, now it’s kinda official.  I have authorization to work in the good ol’ USA.  At least for Alstom Grid in Phoenix, Arizona, anyway.

On Sunday, 30 July, I drove the to Emerson border crossing, told the inspector that I wanted to get my TN visa, and went inside.  It took about an hour and cost me some cash, but then it was done.

I had to present my original university degree, and official transcripts of my marks.  I also took my original APEGM (Manitoba) P.Eng. certificate and my PEO (Ontario) P.Eng. certificate, for good measure.  The inspector actually looked carefully at everything, and remarked about my university GPA.  That made me smile.  The marks I got in a course I took 30 years ago, means nothing to anybody, except to me… and a US Customs & Immigration official. 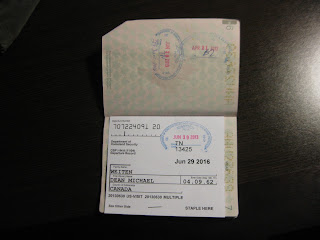 Then I officially imported my car into the USA.  I had to obtain an Emissions & Safety Letter from GM Vintage Vehicle Services at a cost of $110, and present that with my valid registration.  Boom – done!

Because it was the long weekend, I had not tried to get a room in Grand Forks but instead booked at the Hilton Garden Inn in Fargo – although when I went into Grand Forks for dinner, I saw that I probably would not have had a problem.  Well, by that time, it was after 6 PM, and I wouldn’t be able to cancel the Fargo room anyway.  I had a nice dinner, then on to Fargo to crash and to sleep.

I always travel heavy, and this was no exception.  They don’t like it when TN visa applicants go out of the country right away (kinda makes them wonder whether they should be letting our household goods come in on a semi, if the person has skeedaddled back out).   Regardless, if you know me, you know that I take a lot of stuff.  I took a bunch of magazines that I need to read – and then recycle 🙂   I took a bunch of financials and receipts that I had to enter into Quicken.  Of course, a few days’ clothes, my briefcase with laptop computer, my swimming stuff… ugh.  No worries, I drive a big car, right?

I arrived at the hotel at 10 PM, just as the pool closed.  Well, one activity off the list.  I worked on my receipts until midnight – another one completed.  I never did do any reading, really, so all the magazines came back with me.

The next morning, on 01 July, I went to a local Wal-Mart and bought a pair of long-range top-notch FRS radios that Eric and I will use when we drive down to Phoenix next weekend, then headed for the border.  A quick stop in Grand Forks for lunch, then off back to Canada.

The Canadian border inspector was fine with me being down for a day, bringing back $90 worth of stuff, and having obtained my TN visa on my way down.  He asked to see in the trunk, and was concerned about “all the stuff” that I had back there.  He rummaged around in there for a bit.  He asked about it.  I mumbled that I travel heavy, and that I had planned to do much more on my overnight getaway than I actually got done… He asked if it was all mine – which of course it was – so I advised in the affirmative, and he let me roll on.  Yay!  I think.