Skip to content
On Wednesday at breakfast, the waiter asked Norbert if he wanted a dosa – an Indian food that’s like a pancake, but crispy on one side.  He said, “sure.”  Well, it came rolled up like a dunce hat – we had a chuckle, thought he should wear it instead of eat it.  He ate it, and it was very good.

Then, we were back at the office, trying to understand why we made so little progress the day before.  My personal theory was that there were too many cooks.  We made plans to go back to the lab on Friday, but with far fewer personnel.  Besides, the novelty of coming to see the boy from the Canadian Prairies make magic, kind of had worn off 🙂

At lunch, I kind of wanted something more, um, North American.  Manikandan mentioned that there was a large mall not far away, and there was a McDonald’s there.  We shrugged, and headed off.

Well, ERL is located on what would be considered a back alley, in Winnipeg terms.  That is fine, but the traffic on it would be like, say, Moray near Ness.  So, you have to be careful.

Once out to the main street, you think things would get better.  Well, no, the sidewalk is uneven, broken in places, and in a couple of spots you have to walk on the side of the road.  Here in Bangalore, folks think that it’s no big deal to walk with your back to traffic whizzing past you within a foot or two, but it makes me nervous.

Well, we got there, and sure enough, The Royal Minakshi Mall is very impressive, very modern.  And, yes, they have a McDonald’s.  Guess what?  No beef.   So I had a spicy chicken sandwich.  Yikes, was it spicy!!! 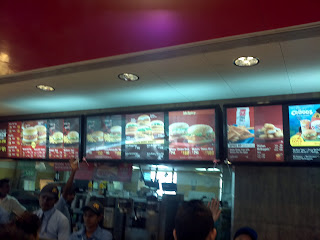 There is a small window out onto the mall – this is the take-out window.  People wander up and order off the mini-menu. 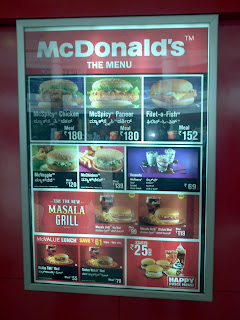 There’s a KFC across the hall.  Can you tell that they don’t do beef, only chicken?