Sadly, today is our last full day in Mexico.  We were up at the usual time, about 09h00 or so, can’t remember, ha ha – that’s kind of the definition of “vacation”.

We needed to vacate to let Estella, the maid, clean the condo.  So at 10h00, we zip around the corner where they’ve just put up a sign that says they can inflate tires, toys, balls, whatever.  Rather interesting, I think maybe it’s a small commune of young folk, and they are having trouble making ends meet.  This home on the corner has been alternately quiet and loud for days.  A few days ago, a sign appeared on the corner, advertising the availability of a shower.  The next day, another sign.  And two days ago, this sign about inflation of balls, etc. 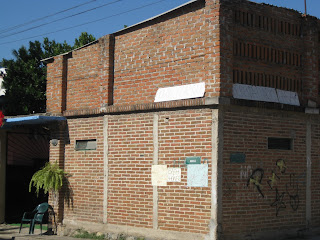 You may recall (well I hope I blogged it back when we first arrived anyway) that when Eric bought the little football to play with his cousins in the ocean, it was flat and needed inflation.  We had a devil of a time finding someone with a needle to fill it up!  Too bad we didn’t know about these guys on the corner, then!  Oh well.

Anyway, today I wandered into the compound (almost every home is in a walled-in compound, should add this to my observations) and called out a few times, but nobody answered.  Again I wandered, but again didn’t go right to the back.  Then just before I was about to leave, I saw a sign on the door that said something about “timbre” and had a small cowbell hanging there.  I shook the bell, and a young fellow jumped out of the far building.  I showed him the football and said deflate, and he said yes, yes.  On the window ledge, he moved an image of the Virgin Mary, and there was an inflation needle!  Great!  Then he started off with the football.  I kept saying, “empty”, “let air out”, “deflate”, but he went into the garage where an old dusty car was kept, into the corner, and fired up the compressor.  “No, no, no,” I kept saying, and took the ball and started squeezing the air out.  He held up the hose end and pressed the release, letting out a burst of air, saying something in Spanish which I would imagine was, “This will fill the ball up!”  But i kept squeezing and saying, “No, deflate!”  Finally he twigged to what I meant and turned off the compressor, grabbed the ball from me, and squeezed it flat, chuckling.  We both learned something, I think.  I asked him, “How much,” and he protested, “No, no.”  But I gave him all the change I had anyway, about 9 pesos, and we both went away happy.

Lesson learned: look up the key word(s) in Spanish before going down to get the ball deflated!  I just looked it up on Google Translate (wow what a service), “desinflar” is the key word here…

Then we went down to the Royal Decameron Resort and ordered our taxi to the airport for tomorrow morning, one step closer to home, ugh.  [ it may always be nice to get home, but I hear it’s a little cold and breezy back home so I’d rather stay here, thank you very much! ]

We wandered down to the market and picked up a few things, including a couple of gifts.  A couple of them were pottery and were heavy, so we took them back to the condo.  Estella wasn’t quite done, but she let us dump them off.

One of the places we stopped at is run by a bit of a character – a nice guy.  For the month of January, he accepts Canadian Tire ‘Money’ for payment!  He gives it to a Canadian friend who takes it back to Canada and buys tools, etc. that he needs and ships them back to him.  He showed us his present wad of Canadian Tire ‘Money’, it was quite a bit, six inches or more thick!

Now, I had seen this little hole-in-the-wall restaurant run by a fellow from California, as it turns out – Flaky’s Fish and Chips, just had to try it.  We went for a late lunch at Flaky’s, it was quite good!  I’m not sure the dietitian in Dayna really liked the battered fish, but hey, once in a while, come on! 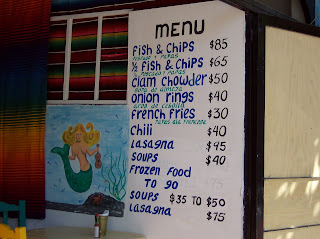 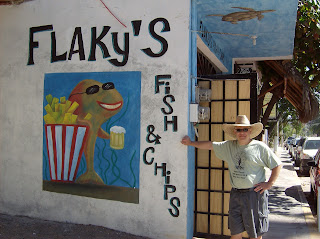 We returned to the condo, chilled for a bit, then I ran two blocks to the bank for a bit more cash to cover tonight’s dinner out.

On the way up to the bank (and I mean “up”, see below, it’s quite an uphill walk), I saw a newly fallen coconut sitting along the side of the road.  It was still there on the way back, so I grabbed it and brought it back, just for fun.  I had never had my hands on a more-or-less fresh coconut before!  Well, this one had gravel on it from being on the roadway, and it had split on one side and was gooey from losing some coconut milk, so it wasn’t going to be eaten, but it was interesting just the same.  Dayna hadn’t handled one before either, so I handed it around.  Now I guess it goes out, so sad.  Actually, there are old, dried coconuts and pieces of coconuts all along that street, as I guess this is not a new thing.

This was our last day to catch some rays of the wonderful Mexican sunshine.  So, with the bank & the coconut out of the way, we zipped down to the beach to grab our last few rays of Mexican sun.  I went for a swim in the ocean and Dayna went for a brief dip.  I got a mouthful of salt water, wow, sputter sputter.   After flopping on the beach and drying off in the sun, ahhhh, I went back to the condo to shower & change.  The rest stayed on the beach for another hour and then came back to do the same.

Barrie and Helen went for a walk on the beach before supper, and Dayna and I chilled on the palapas.

Next up, a dinner at Eva’s Brickhouse restaurant.  This being our last night here, we decided to eat out, and a bit upscale at that.  Now, the highest of the high end is Mark’s, which is a half block away, but that’s really a bit much for us.

Three of us had the special, which was a slow roasted pork, 7 hours on a mesquite fire, wow, so tender!  And the fixings, great too!  Dayna had the jumbo prawns dinner.  And for dessert, chocolate lava cake, oh my word!

Now down to packing, then chilling out and time for bed.  Tomorrow the crazy airport and the excruciating 4-3/4 hour flight back to the ice and snow of the ‘Peg.

Later, we took one last walk down past the square.  Joe Crow’s was rocking out, but the big news was the house party about a block from the condo.  Yikes, sounds like they might go late.  Very loud, live band, disco lights, the whole works.  I guess Tuesdays are special here?  Or at least this Tuesday.