This morning, the men were lazy and hung out at the condo, while the ladies went to La Palapa Boutique (ladies’ clothing 100% cotton tailored to fit) and Cotton House (where you can see the actual looms upon which they make place mats, napkins, table cloths, and the like).

Eric spotted four iguanas trying to stay in the heat, up on the wall behind the palapas.  It caused a bit of interest.

It was a cool start to the day – cloudy, wow that’s a first for us here, anyway.  Rather chilly, I’ll say – no extreme sun to warm the skin.  It was actually kind of nippy up on the palapas.

Then in the afternoon, we walked down to the beach in front of the Nuevo Vallarta resorts, where they run parasailing, banana boat rides, and rent out jet-skis.  The clouds cleared for a bit and it warmed up nicely as we went out to do the activities.

Some of the kids wanted to go up parasailing, and the operators advised that children as young as seven could go.  Twelve year old Matt went up parasailing first, it went without a hitch, and he gave it a thumbs up.  A few local young ladies went up, then nine year old Emily went up and also had a good time.

They were directed to pull the harness sides in response to whistle signals from the ground, and both glided down slowly in the onshore breeze; the guys running the operation caught them and slowly, gently lowered them to the sand.  How nice!  …but apparently that wasn’t how mine was going to be…

Other folks got a long winded careful explanation of how the harness works, how to sit in it, how to land.  Me, I got a short, “sit here, hold on here while lifting off, pull the bottom forward as you get up, and when I whistle, pull down here.”  On with the life jacket and the harness.  They said I would be running to take off, but they suddenly told me to walk – as I questioned their instructions, they gave me a push and the rope gave me a tug, and I was rolling!  I gave a whoop as I lifted off.  Well, I got up easily enough, swinging slowly from side to side, hanging on to the straps, even though they had told me I wouldn’t have to hang on (refer to “afraid of heights”).  I tried not to think of how high I was, just looking out at the boats and laughing at moving through the air.  I’m flying!

It was a blast!  Just like sitting in an old style playground swing.  Dayna tells me that I never got as high as either one of the kids, probably because I am over double either one’s weight, but it was plenty high for me!  [ I kind of have a pathological fear of heights – kind of! ]

Then the boat took a turn to the north and I felt that I was descending a bit.  Wait a second, descending a lot!  Yikes, we were a couple of kilometres out in the water, and here I am, heading down!  At the last second, I pulled up my legs so I wouldn’t drag, but the boat operator hit the gas and I started to lift again.  I figure I may have been 5 ft off the water by that time, yikes.

Back on the shore, Dayna, Dave and company were recording my adventure on our little Vado HD video recorders and cameras.  They were quite concerned about my dip to the surface.

Apparently, the wind had shifted on them as I took off, and that caused the operator trouble in keeping me aloft.

Well, the rest of the flight went well – as we went back to the shore, I could see and realize how high up I was.  It made me nervous, but I tried not to think about it.

As the boat rounded to go along the shore, I heard the whistle that signalled that I was to pull down on the right harness strap, which I did.  Hmm, not moving onto the shore.  There’s someone down there frantically waving a red flag, wonder what that means?  Oh well, I’m doing what I’m supposed to do.  Then I hear someone yell, “Pull harder, all the way!”  Of course, I complied, pulling down on the right strap with all my might.  No change!  As I slowly descended into the ocean, I’m thinking, “Hmm, this isn’t the way it’s supposed to be.”  I hit the water slowly, gently, no problem.  It was smoother than jumping into a pool off the diving board.  I was laughing as I hit, my mouth was open and got seawater in my mouth and eyes – yuck.

So now I’m in the water with a rope in front, a parachute behind, a life jacket and a harness to the chute.  Fortunately I had taken note of the way that I was harnessed to the chute, so I unhooked myself.  Well, one side was easy, but then my weight was on the other side and it was a bit of a struggle.  It took a bit, but relatively quickly I was free.  Now Dayna was concerned because my feet came up as I rolled out free of the chute and its lines.  The Mexican staff were quite concerned too, apparently.  Eric says that when the mild-mannered laid-back Mexicans get excited, then you should start to worry.  Anyway, the boat operator circled back.  He was surprised that I was free and told me to swim back to shore, which I did.  It is difficult to swim in a life jacket and harness!  [ fortunately I swim quite a bit so it was a challenge but OK ]

The guys on shore were quite relieved to see me stagger onto the beach, I was busy telling them that I was fine.  Then the head honcho reminded me that I hadn’t paid yet.  No deal on that ride, although they didn’t charge me extra for the excitement and for the swim, either!

I was soaked when I didn’t plan to be (kind of expected to land on the shore like everyone else), so I only hung around for a bit, then headed back to the condo.  Dave and Drew were headed out for a jet-ski ride as I was leaving.

Just before supper, we got a couple of final group photos – all of us.  Tomorrow Dave & Jennifer & family are heading back to the Great White North…

Supper tonight was at Claudio’s, a very nice mostly open-air Mexican restaurant on the beach.  We arrived right at sunset, and got a few nice pictures as the sun went down. 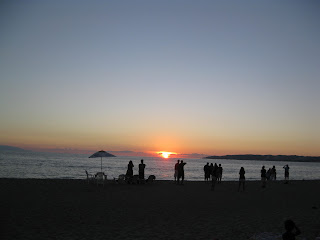 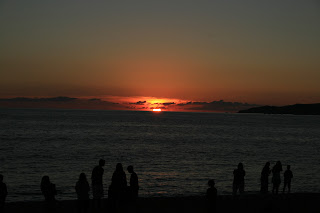 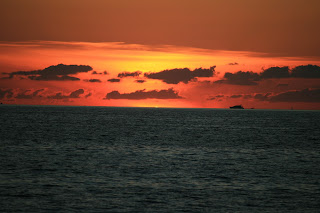 Eric warned me that real marguritas would have 2 or 3 ounces of tequila, but I ordered a couple anyway.  Yep, they have lots of tequila in them.  I was mostly walking vertically on the way back – mostly.

Later, here I am shivering up on the palapas, actually quite cool up here tonight.  The 31 card tournament just ended downstairs.  There’s a very loud live band playing about 2 blocks away, they’ve been going on and off for about two hours.  I’m thinking that there is a wedding reception or something going on over there.  I wonder if they are ever going to let us get some sleep?

It’s probably time to turn in, or at least try to.