So that party went on last night until about 03h30.  It didn’t keep any of us awake, fortunately – my CPAP machine makes enough noise to mask it; Eric sleeps like a log no matter what; and everyone else was insulated enough from it that they were able to drift away.

So today is the day that we knew would come – we are losing half of our group today, as Dave, Jennifer, Drew, Matt and Emily fly away back to Manitoba (by way of Toronto).  I’m sure they will appreciate sleeping in their own beds, but then again the sun & sand made it nice to sleep here on the beach!

It turns out that Dave won a hard-fought card game battle of 31 last night, triumphing over Jennifer.  Just to rub it in, he went out this morning and had a little bracelet made saying “31 Champ”.  Much to Jennifer’s chagrin.  Suffice to say that if she had won it, things would be different.  Oh well, sounds like she will get her chance.  Dave says the bracelet will be up for grabs next Christmas when they do the 31 tournament again.  The trash talking started this morning already – Emily declared that she would be the one to win it next year!  And so it goes… 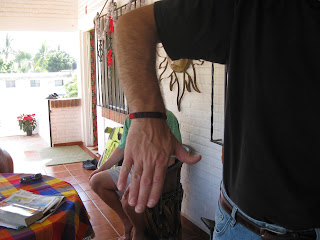 Dave & Eric went down to the taxi stand to arrange their respective rides to the airport today and tomorrow.  We had an early lunch, then it was time to say our goodbyes.  Load up the van, and they were off… Dayna and I headed back to the Mega store to pick up a few things, and because she hadn’t really had a chance to browse the other times we were there (all 10 of us were there, on a mission, the other times).

Well, Mega was a complete zoo!  Something like five times the number of people there today.  Dayna couldn’t get the salmon that she wanted, and the lineup for the chicken was practically the length of the store!  She settled for an alternate menu (she can do that, you know dietitians) and got the shopping done.  Everything seems very festive here today, way more festive than Christmas Eve.  Then again, the religious aspect of Christmas seemed to be more prevalent here, nice – they think of Christmas like we say we do, and leave the partying to New Year’s Eve.

The bus was very full too, especially going out from Bucerias to the Mega.  We were standing in the aisle because there were no open seats, and an older fellow standing behind me broke out into a spirited song.  He was passionate and enthusiastic, and loud too.  Most of the passengers seemed to take no notice, or maybe this is an everyday thing here in Bucerias???

On the way back, what again struck me was the overt religious imagery at the front of the bus.  There was an image of the Virgin Mary painted onto the glass shield behind the driver, a wooden cross attached to the centre divider bar of the windshield, and a rosary hanging from the cross.  For a Protestant boy like me, there’s a bit more imagery than I’m used to, but I love it.  I like to think that people have some morals, ethics and faith in this all-too-cold and all-too-secular world.

When we got back, the rest of the group went down to the beach to get some sun, while I set up near the pool (where the wireless signal is the strongest and the most reliable) to do my video editing (such as it is) and finish yesterday’s blog.  It seemed to take forever!

Eric had decided not to go parasailing this time.  Oh well, something to take on the next time!

Eric almost forgot to take beer with him to the beach.  I reminded him on the way out, and he found that there were very few left.  Being the civic minded guy that I am, I volunteered to get some more.  We can’t run out of beer on New Year’s Eve, can we?

While at Mary Paz’s convenience store, a fellow was headed out with 2 boxes of beer on a little cart.  As he navigated the step, the top box fell off with a crash – and there was beer and glass everywhere.  He was pretty distraught, can you blame him?  I was very careful with our box of beer.  Not that I’m big on beer, I just don’t want to see the money washed down the sewer…

So tonight it’s barbequed steak for supper.  I’m getting hungry just typing it.