Today was another grocery shopping day.  We really slept in, all of us – and the maid was well about her business by the time we were headed out.  Rather than walk to the Mega, eight of us took the bus.  It was an uneventful trip, but, as always, entertaining.  We always find humour in the situations we find ourselves in, but I’m sure that the locals who ride the bus with us are amused by our antics as well!

We had lunch almost immediately upon our return, BLT sandwiches (well, back bacon, eh?), yum.  Then ran out of the bacon, had an LT sandwich.  Then ran out of lettuce, had a tomato sandwich (heh heh, just need margarine & pepper 🙂 ).  It’s all good.

Someone mentioned the gecko in shower of the main bathroom – I didn’t know there was a gecko in the bathroom!  Our little room has its own bathroom and shower, so we don’t use the shower in the main bathroom.  Well, what do you know, there is indeed a gecko in there, right up in the corner!  Helen says that they will just appear sometimes, and apparently not move for days.  They are supposedly rather harmless, just an amusing fixture in this warm land.

Eric headed out on his own shopping mission out to the shops down by the village square, and came back with a bottle of tequila to take back home.  He spoke to the proprietor of the tequila shop (which sells only tequila, by the way 🙂 ).  The best tequila that he could afford did not have a worm at the bottom, and he asked why.  Well, according to the local tequila expert, real tequila doesn’t have the worm in it – it’s mezcal that has the worm!  See http://en.wikipedia.org/wiki/Mezcal and http://en.wikipedia.org/wiki/Tequila .  Well, we are learning all the time, aren’t we? 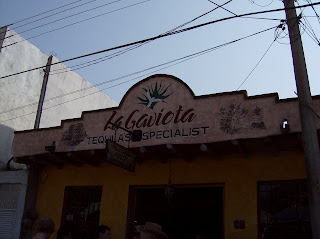 I went on my own little quest to the shops down by the village square.  My sandals are fine for going from the locker room to the pool back home, but they aren’t great for walking the beach.  I did my round of the shops, then went into a shop that had nothing but sandals, and purchased a new pair.  Yes, I bartered.  No, it wasn’t easy nor was it fun.  Eric says I paid way too much.  I’m not telling you how much.  But now I have better sandals.  They are leather, so they don’t quite fit my feet yet, but they are working their way in…

Dayna went on her own little quest, but in the opposite direction.  She likes the artsy crafty stores, so she sought them out.  She purchased two drinking glasses made with pieces of recycled glass.  Apparently they are quite pretty, but hey they’re already packed in bubble pack for shipping, so I won’t know until we are home.

I got back, called my mom, did some E-mail and stuff, then wandered down to the pool.  Eric had been there for an hour, and the sun was sinking low, so of course he had to ridicule my late appearance at the pool – just in time to ensure that I don’t tan at all today.  Hey, he forgets who gave him the “don’t need SPF 150” genes, so he can sit in the sun and not burn to a crisp!  The rat.  I’m already at the point where I could sit in the sun and not burn.  Well, I would be if I wasn’t using SPF 30, which Dayna purchases because she is so fair.  Tomorrow maybe I’ll seek out some SPF 15 and get this tan thing under control.  Or, maybe not – a tan is not a priority for me.  I don’t need to show off the fact that I’ve been down here.  I just like the feeling of being warm… and the sound of the ocean… and the smells… oops, some of those smells aren’t so nice, nix on the smells.

While I lingered by the pool, much excitement was being had not 50 feet away in the condo, and I didn’t even know about it.  Matt decided that he wanted to catch the gecko.  Well of course, the gecko didn’t want to be caught.  When Matt tried to catch it, its tail came off and the gecko escaped!  The tail was stuck to the wall, wriggling away by itself, yuck!  Finally it fell down and was tossed over the balcony into the vacant, weed filled lot next door.  The gecko was also captured, and was also, um, emitted, into the lot next door.

According to Wikipedia, the ejection of tail in self-defence is called autotomy, very interesting – http://en.wikipedia.org/wiki/Gecko .

Most of this exciting episode was captured by Dave on his Creative Vado, a little HD video recorder.  So here it is:

Now Eric has put on Back to the Future.  Gotta love those three movies, at least I do!