Yes, we got up at a rather un-holiday-ish hour this morning, and were ready to depart just after 07h00.  Sure enough, shortly after that, a big van pulled up just outside the condo gate and all ten of us piled in.  I was impressed – it was fairly comfortable for such a large van.  We were delivered to the Nuevo Vallarta pier by about 07h40.  The sun was not yet up, it was still rather dark out.  And rather chilly too!  Mexico does get chilly at night, and I didn’t bring a jacket nor pants.  And, just as I was warming up, it was time to load up onto the boat and get out onto the water.  Yikes, out on the water, it was even colder.  It wasn’t until 10h00 that the sun got intense enough to quell the goose pimples on my arms and legs.

We pulled out from the dock at Nuevo Vallarta, and went into the marina at Puerto Vallarta to take on more passengers.  My guess is that we had about 100 persons total on the boat, a twin hull catamaran.

Whale watching must be a popular pastime, as there were three boats of our type at the Puerto Vallarta docks.  As we exited the harbour, we saw several more boats headed in the same direction, all headed for whale watching.

It turns out that the best place for whale watching is pretty much right off the shore of Bucerias, straight out from where we are staying.  We had seen the boats out there from the beach, but weren’t sure what they were up to – and now we know.

I didn’t get many good photos, but David did with his fancy Canon EOS camera, wow.  Most of the photos of whale watching are all his – thanks, Dave.

While going out to the whale watching area, we saw lots and lots of little jellyfish floating by the boat in the water.  What strange little creatures!

Shortly after leaving the harbour, we started spotting dolphins swimming alongside the other boats.  Then a dolphin surfaced right up in front of our boat.  It had no trouble keeping ahead of us – our boat was actually quite slow.  We saw several manta rays – Dave got an amazing picture later.

Up ahead, we saw a gathering of whale watching boats, and – well glory be – humpback whales!  Far off at first, later up closer.  We saw single whales cresting the water, and later a momma whale and her pup.  Wow, are they massive, hard to imagine their size!

It was here that we were glad that our boat was a twin hull catamaran.  There was a narrow older-style boat (I think maybe it was a “pirate tour”, arrrr!) that was rocking from side to side something fierce.  It would be easy to imagine getting sea sick on that boat.  Ours, on the other hand, rocked gently to and fro, side to side, in the wake of the other boats, and in the wind and waves – just a nice, gentle, soothing motion.

Generally each whale would crest once or twice, then disappear, and we were off with the pack to seek the next one.  We did this for about an hour, hopscotching back and forth in front of Bucerias, Nuevo Vallarta, and Puerto Vallarta, then started the slow trip back to the harbour.

On the way back, we saw one more whale, seeming to bid us adieu as we made our way to the marina.

Then we saw two little fleets of manta rays swimming in formation – quite an amazing sight!  They floated right past the side of the boat.

We passed two sea turtles.  The first one turned up and dove in, as soon as it saw our boat.  The second one just floated blithely past, prompting Eric to wonder whether it was still alive…

All too soon we arrived back at the dock at Nuevo Vallarta, our adventure over.  It was lunchtime, so we needed to seek out some food.  Our plan was to catch the local bus out to the highway, then take another bus back to Bucerias, where Barrie and Helen know the good food spots.  Barrie got on and paid for he and Helen, paying 20 pesos for the ride, 10 pesos per person.  Dayna got on and paid for she and Eric and I, paying 18 pesos, a much better deal at 6 pesos per person.  Then, Jennifer got on, paying 45 pesos for the five of them, 9 pesos per person.  Wow, such consistency!

It turns out that the bus didn’t go to the highway in Nuevo Vallarta, as we had expected.  It went all the way almost to the edge of Bucerias, then up to the highway near the Mega store (see Thursday the 23rd).  Hey, we can walk from there, so we did!  Along the way, there is a fenced off yard with a bunch of iguanas wandering about, so we snapped a few shots of them. 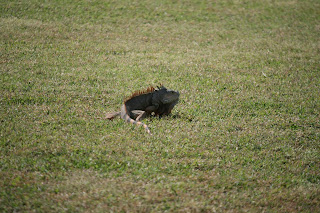 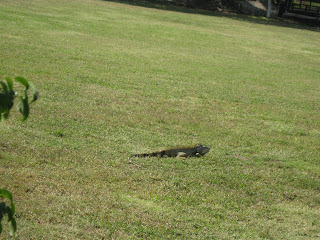 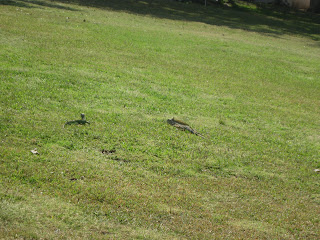 We had a great lunch with inexpensive cerveza (beer, which Eric tells me is the most important word to know in Spanish).  The day was hot, and the cerveza was cold, so, ahem.  After lunch, back at the condo, I crashed right out and didn’t even hear the rest of the crew head down to the beach.  I awoke about two hours later, took a few minutes to shake the cobwebs out, realized I was alone, and headed down myself.  Well, most of the adults were dozing out on the beach as well!  Must have been the heat, the walk and the beer.

I was only on the beach about 20 minutes, to Helen’s amusement, and it was time to come back.  Oh well, it was 17h00 and the sun was fading, and with the breeze off of the water, it was a bit chilly anyway.

We headed back to the condo.  As supper was prepared, I called my mom to see how she was doing.  She’s doing well – her new medication regime is working better than any she’s had for a long, long time – and that is good news.  She also tells me that back in the ‘Peg, it’s a little colder (hmm, a little), a bit blustery, and drifting snow – making me feel good about being down here for the holidays (sorry, mom).  Actually, this is so nice, but the one thing that would make it nicer is to bring all our loved ones down with us – maybe another year…

Supper was of course very nice, barbecqued ham steaks.  I could get used to the sun, the beer, the food, ahhh.

Dave and Jennifer and their family have headed back to the market to seek out a few items.  Eric is off to seek out a bar where he can watch Monday Night Football.  And, I am writing my happy little blog and drinking Chilean Cabernet Sauvignon, Concha y Toro, mmm.  I think I’m the winner!

Tomorrow is a slack day.  It will be back to the Mega and stock up on groceries once more – we all seem to be overachievers in the appetite department – and Eric needs new earphones for his iPod.