Yes, today was the day to go to the market, held each Sunday morning, on the other side of the highway.  We got up, well, not early, but at least we got up (you know by now that I’m the sloth of the group), then made our way to the market.  It was basically about six blocks of streets with vendors on both sides.  The crowds apparently were small for a market Sunday, but that’s just as well for out-of-towner gringos like us! 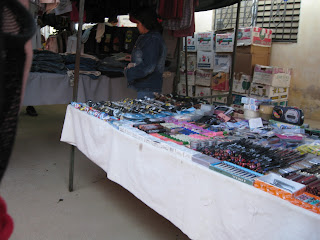 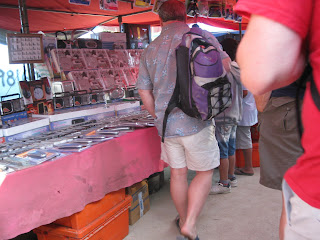 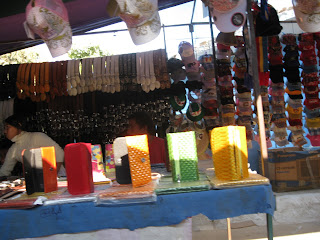 Of course, there were fresh vegetables and fruit there, lots of it.  Also some stands with canned goods, bagged spices, and (shudder) fresh chickens (no refrigeration, and yes we gave that a pass), clothes, shoes, TV remote controls, X-box game consoles, Spanish movies & CDs, pots & pans, and every part imaginable for gas ovens and barbeques.  In one stand, there were fresh fresh coconuts and a fellow was slicing them open with a machete.  In another across the way, there were all kinds of small tools, mostly used – wrenches, pliers, hammers, screwdrivers.  Another had all kinds of electrical wiring parts – outlets, cord ends, light fittings, switches.  The sights, sounds, and smells were amazing!  And mostly good smells, too. 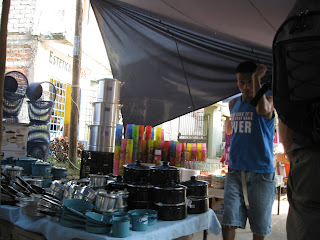 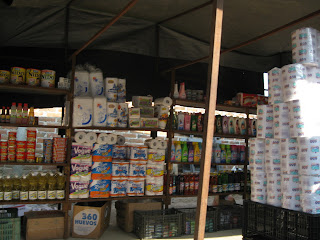 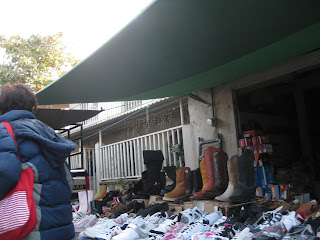 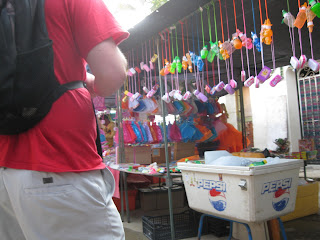 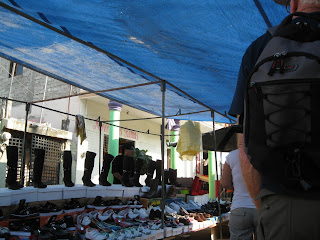 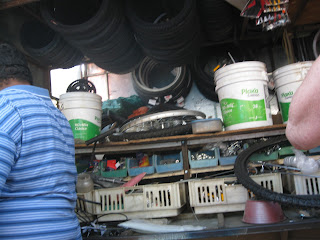 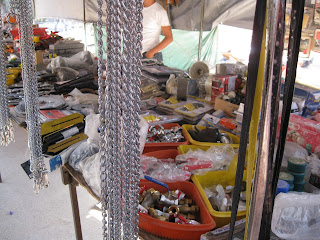 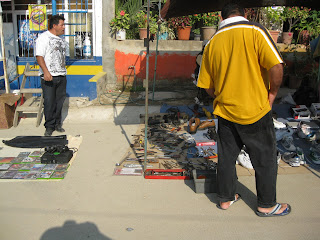 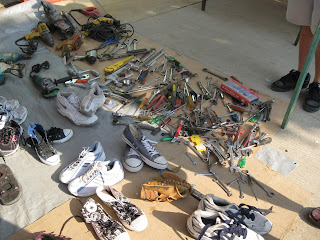 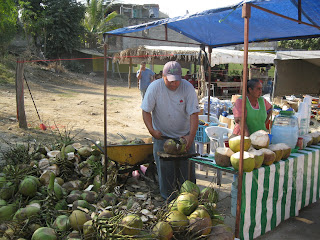 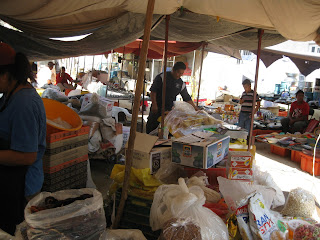 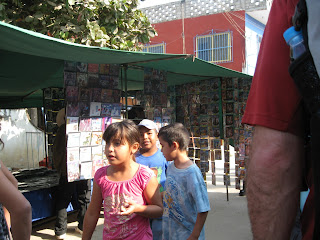 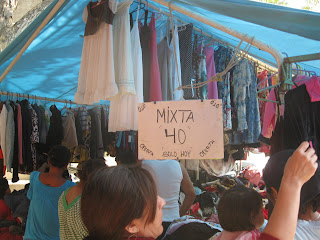 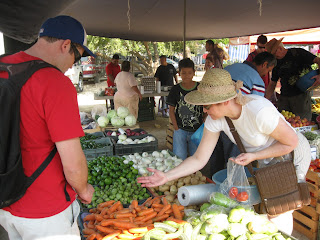 Also noticed – they must have pretty relaxed vehicle safety standards down here – check out this truck! 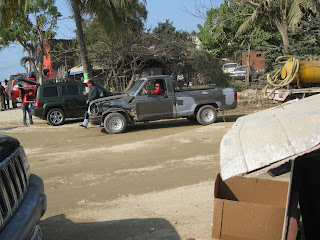 We dumped our food back at the condo, and then off to brunch at The Red Apple, a nice little restaurant on top of a building halfway toward the town square.  The logo for the restaurant is an upside down red apple, and there’s a story behind it.  I’ll let the story board speak for itself, below.  Brunch was quite good, by the way.  Eric especially liked his “Eggs on a Cow”, ha ha – probably should have translated as “Steak and Eggs”.  He says that he’s going to order “Eggs on a Cow” for breakfast from now on, and see what kind of a response he gets. 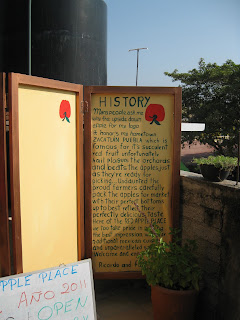 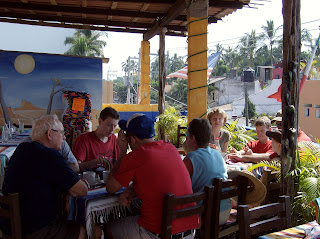 Just as we were about to leave, Dave noticed the overhead wiring – yikes, you should see it – all tangled, quite a mess!  I hope these are mostly telephone and cable wires, not power wires!

We stopped by Scott’s Tours http://scottsbuceriastours.com/default.aspx and signed up for a half day boat tour tomorrow to do some whale watching.  I originally wanted to try snorkeling (have never tried before) but it just doesn’t fit in.  Unfortunately, we have to be at the Neuvo Vallarta dock at 08h00, so that means leaving the condo at something like 07h15, not very holiday-ish.  Eric is not amused – we are looking forward to a grumpy Eric all day – he is too much like me for his own good.  As for me, well, I won’t have too much trouble with a 06h30 start, this is more like my regular schedule.

I enquired about the “canopy tour”, which is tour-speak for zip-lining, and apparently there are about eight of them going all the time.  Hmm, they all start from a long ways away, would wipe out a whole ‘nother day for us.  Eric and I will settle for para-sailing just off the beach, some time later in the week, that should be enough excitement for my poor heart!

We then went down to the square, where there are a bunch more market stalls, mostly selling trinkets, hats and T-Shirts.  There was a store that sold only tequila, yum – wait a second, never had tequila that I can remember – hmm, might have had a shot at the bar in the early eighties, but then again, I can fall back on the “I can’t remember” thing. 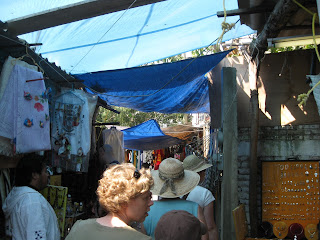 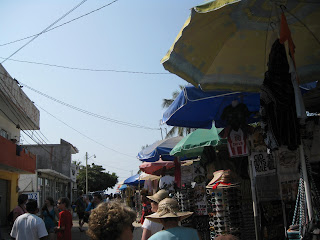 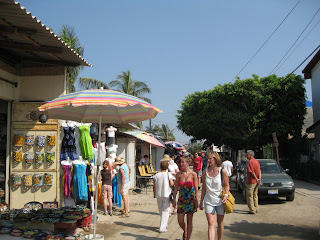 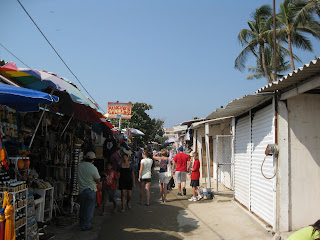 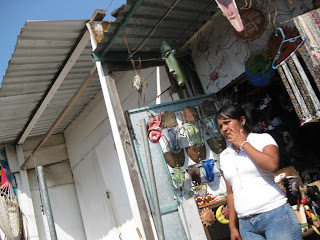 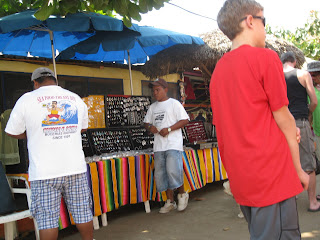 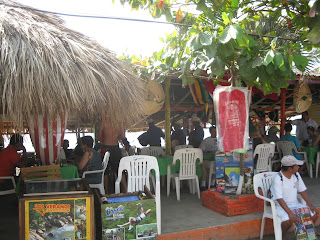 Eric wanted to wander without a ten person entourage, so we headed back to the condo.

Most of the crew (sans Eric) headed down to the beach Dayna and I flopped by the pool to soak up some sun in a non-sand-filled environment.  Plus this gave me a chance to try to tan my ankles, which are white after my first day out with socks on, curses!  I did some reading (surprise surprise), this time The Speedster, the magazine of the Antique Auto Club of America, very interesting reading. 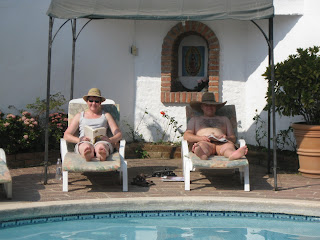 Hmm, there were pictures of the fall Hershey meet http://hersheyaaca.org/fallmeet.html in the first full week of October in Hershey, Pennsylvania.  I’ve wanted to get there for years!  It’s huge, takes a whole week just to see all the vendors, hmm.  Anybody for going???  I had promised myself that I would go to it when I started work at Norscan and bought the de Ville, that was almost five years ago.  Might need to try a bit harder to get there this year.

I took the notebook computer down by the pool, where the signal was way, way better than in the condo, yay!  Now I’m tooling around the web looking at audio books to purchase, download and listen to.  Seems I’ve been caught up in a self-help/business education thing, not sure why.  It was all started with the “Good to Great” audio book I bought a few months back.  I have a bit of a commute back home, can listen to a fair amount going to & from, would be worthwhile to hear them.

Dayna and I then wandered the three blocks to the bank and got enough cash to hopefully carry us through the next few days, including paying for our tour tomorrow.  Ha ha, as Dayna’s brother Dave said, Mastercard is going to wondering what happened, we haven’t used our credit cards for almost a week!  Very few places accept credit cards down here, and those that do – well let’s just say you probably wouldn’t use your credit cards if you had the chance.

On the way to the bank, I had to walk under a coconut tree that was obviously full of coconuts, made me nervous – when we were all sitting in the palapas yesterday having lunch, Dayna saw a huge coconut fall out of a tree not 20 feet away, and we all heard it hit the ground – I have this image of emulating Sir Isaac Newton, but with a much larger bruise on the head!

We zipped onward to Marie Paz (“Mary paws”??) convenience store 2-1/2 blocks away to pick up toilet paper and diet cola (gotta have the necessities of life!), also decided to get some wine, ah…

I got the notebook, got up to the palapa, hooked up to the wireless, and called my mom.  Apparently, it’s -13C and 50 km/hr south wind back in the ‘Peg, a bit of snow and wind chill -26C.  Mom says that this morning, the snow was blowing so much that she couldn’t see across the perimeter highway, and that’s only a few hundred feet.  Too bad, so sad, I tried to be empathetic, but it’s tough when it’s +25C and sunny.  Oops, clouded over.  +25C and cloudy, sigh.

While I was up there, I could hear the boys downstairs watching the rest of Indiana Jones and the Last Crusade, loved that movie, still missing out.  Oh well, priorities…

And then a three man band goes by on the street.  I thought I heard a saxophone!  I guess I’m not going crazy.

Now there’s a spirited game of spoons going on here at the kitchen table, but hey I have this blog to keep me busy.  Oh, Dayna has just been ejected from the game, will now settle in to do her Sudoku until the next round begins.  And so it goes…

It will be an early morning.