A good sleep was had by all.  Well, maybe not all – Drew had some technical issue with the bed, and I’m not sure Matt slept well out on the couch – but I slept almost a full 12 hours with only a few interruptions (middle aged bladder?  hmm).  It was probably a bit excessive, but hey, I’m on holidays!!!

Over breakfast, Eric and his younger cousins surfed the channels on the TV, but found that their ability to enjoy the squawk box (as my mother used to call it) was hampered by their inability to understand Spanish!  Oh well, there were the major U.S. networks there too, but they were showing (shudder) daytime TV.  Thankfully, they won’t be glued to the TV much during this holiday.  They can’t say that about me and the computer, I guess, so sad.

Today is grocery shopping day.  We walked the 3/4 hour from the condo in Bucerias (Condo Jacardanas, 57 Fancisco Madero) to the huge supermarket.  Along the walk, we saw a beautiful condominium complex for sale (hmm, probably out of our range), some huge time shares (apparently they shy away from that name now, it’s “partial ownership” now), and a new new private high end condominium development.  Very nice. 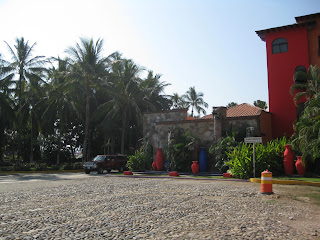 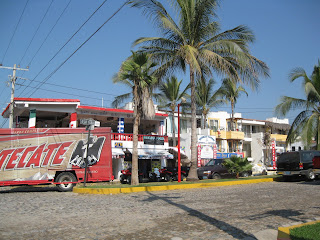 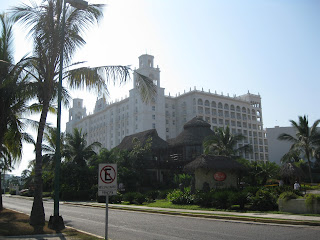 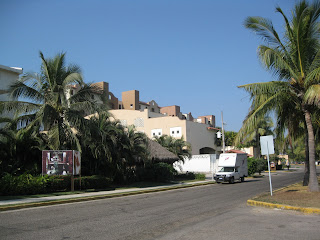 In the centre is a small square with a manger scene and a Christmas tree shaped poinsettia tree.  It all looked a bit weird to us – but having been in Bethlehem not two months ago, remember that Jesus was born not in the snow, but in a dry middle eastern climate, so really the dry manger scene is probably more realistic! 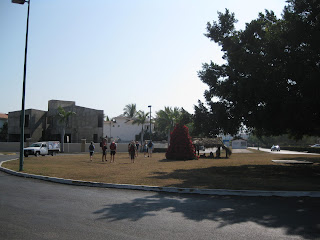 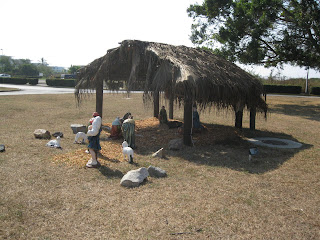 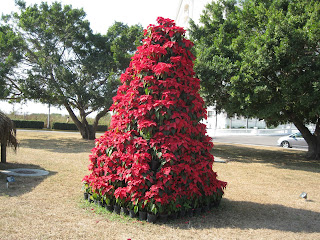 The supermarket is called “Mega”.  Yes, it is “mega” for sure.  It starts in the parking lot.  You can order a car wash for your vehicle while you shop.  There are several fellows wandering the parking lot with portable high pressure washers.

Inside, it’s pretty much like any large supermarket in Canada.  Of course, everything is in Spanish.  Well, what do you want, this is Mexico!!  They also have time shares set up just outside the checkout stands (ugh), a very small McDonald’s that only serves ice cream products (M&M flurry, yum, but they don’t mix it at all), and a mall that is mostly empty (but has a Scotiabank in it – hey, you are richer than you think).

They seem to have no taste for diet drinks around here, as they are difficult to find.  Well, sometimes you can find small (591/600 ml?) bottles and cans in the convenience stores, but all the restaurants, bars and fast food places only seem to have sugar colas, ugh.  Even in the supermarket, they seem to keep DP (Dean’s short form for Diet Pepsi) hidden, although our shoppers did find some.  Certainly DPCF (DP caffeine free) is non existent down here.  Apparently I am going to have to live on beer and water, not such a bad thing!

So in the mall attached to the Mega, there is a small courtyard with one fast food outlet (like I said, mostly empty mall) – a Chinese food place, the only place in the mall where I found a diet cola drink!  Well it was DC (Diet Coke) but hey, any port in a storm, right?

Eric bought a football to toss around.  It was pretty soft, and we have no inflation needle, but more about that later.  He also purchased the fixins for Strawberry Daquaris – he didn’t know what was in them, but Uncle James (well little brother James to me) up in Red Deer did, so I texted James and got the lowdown.  Now we have everything but triple sec, which Eric says he will live without – he’ll see how good it tastes without it, and get the triple sec if it feels like it’s missing something.

On the way back, we rode the bus.  That was an experience – I haven’t had a ride in a bus with standard transmission for a long time!  And that shift lever must be four feet long – no cable shift here, it’s connected right to the transmission in the middle of the vehicle.  The driver was pedal to the metal on the accelerator or on the brake the whole time – man do they drive down here!  We must have been doing 90 km/hr or more down those little right-side frontage roads that double as left turn lanes, yikes.  And the driver hammers the accelerator before the poor folks are even fully on the bus – how entertaining!

We made it back to the condo all right.  We had a nice lunch of tortilla wraps and various fillings.

After lunch, the rest of the crew went the two blocks down to the beach, but Eric and I ventured off in search of a place to fill up that football.  Plus, I wanted to make a duplicate set of keys for Eric and for Dayna, so finding a locksmith would be good too.  We wandered down to the main street, well actually the main highway, and strolled along.  The locksmith was easy, but it took a long while to find someone who could fill the football.  But the fellow was nice enough to let us use his compressor, even had an inflation needle, nice.

As we strolled back to the condo (hey that’s the pace around here), we decided that our beer supply was dangerously low, so off to the local grocery for another 24 bottles of Coronas, and a few limes to put in them.  Folks smiled at us as we walked back, Eric with a case on his shoulder.  Kind of a Canadian thing, I think.  Down here, folks seem to only buy a few at a time.

It was a hot day, so we consumed a few of those Coronas.  The lime is a nice touch!  Eric headed down to the beach, and I stayed to call mom on the computer (hi, mom!) and catch up on the news back home.  Well, and start this blog.

Down at the beach, they had a great time.  They all went swimming in the ocean, Eric and Matt threw the football around for an hour, and just generally they soaked up the sun and the waves.  Yes, yes, I wasn’t there, but I’ll get there, no worries.  By the time they got back it was almost dark.

We have an elaborate meal plan (Helen is an elaborately organized person, and Dayna being a dietitian, with Jennifer and her concern for the kids rounding it out), so they carefully and deliberately constructed the meal while the guys circled like sharks.  This way, at least some of the fruit gets eaten – although there are snacks, they are up high where only Eric & Dayna’s dad can reach them.

Supper was great, salmon, yum.  Well, none of the kids ate the salmon, but there was spaghetti from last night, so they enjoyed that.  So far none of us are starving, and that is a good thing!

After supper, Dave & Jennifer, Dean & Dayna wandered back down to the town square and beyond.  We stopped at places that we’d never stop at with the kids – a couple of jewelry and craft stores, and an arts store that had (ahem) some rather provocative oil paintings leaving not much to the imagination (quite a juxtaposition next to the Virgin Mary and the crucifixes, hmm).  Well let’s just say that the ladies did the browsing and the men did the standing around to ensure that the street was still passable…  Anyway, there’s a ravine that seems to run to the ocean, splitting Bucerias in two – and a cute bridge that runs over it.  As you wander up to the town square, you must run the gauntlet of small shops that line the narrow street.  Now though, at night, most are shuttered and only a few are open.

The town square is still a busy place though – mostly food vendors, who turn the sidewalk into a hopscotch maze.  And the children – my, my, even at 21h30 at night – dashing to and fro, without a care.  Oh well, it is the night before the night before Christmas, isn’t it?

As you pass the town square, there is another block of shops, then you enter the nightclub district.  I was entranced by Joe Crow’s Bar – which of course is completely open to the street, so you can hear the band very clearly from over a block away.  Now I’m not a Jimi Hendrix fan at all, but that band was putting so much blues & soul into the Hendrix tunes, it made me want to check it out.  Oh well, we weren’t on a bar hopping mission, we were on a shopping mission, so back we went.  Plus too, I don’t really handle really loud music all that well any more (well, truth be told, never did), and it was loud outside the bar, so I can only imagine how it was inside.  In any case, we wandered back.

The purpose of our wanderings was to gather a few trinkets & gifts for the younger kids, and a few “staples” (read: junk food) for the upcoming Christmas eve.

Upon our return, we found the rest of the crew in the midst of a spirited game of Dominos.  I couldn’t make heads nor tails of what they were doing, but it appears that Helen walked away with it – meaning that she had the lowest score??

Jennifer couldn’t help but sample the tacos, but she wasn’t very discreet about it, so in short order, our snack supply was gone and there were crumbs everywhere.  It seems as though another trip to the grocer’s will be needed today to ensure that adequate supplies are available for this evening.

Another early night, this time 22h30.  This is becoming a habit!  Oh well, it’s better this way, as we can get up and going relatively early for holidays, before the heat of the day.