Today I spent the beginning of the day, while the others were still asleep (and for a while after they were up), working on the computer up on the palapa.  The wireless network mostly works up there.  I was able to do yesterday’s blog this way, and upload the images that wouldn’t upload last night.  It seems that the wireless is more flaky in the evening – perhaps because more people in this little complex are using it???

After breakfast, the kids went off to run up and down the sand and blow off some steam.  The maids arrived to clean up the unit, so the rest of us got kicked out.  Well, if sitting in the sun by the pool counts as being kicked out, that is.  After a time, Barrie and Helen and Dayna decided to go pick up the pastry for dessert tomorrow (what?  Christmas day already?  yikes!) and I, being lazy, stayed behind at the pool to relax and plow through some of the magazines I brought.  Nice.

The rest of the crew arrived home for lunch, chicken fajita wraps, excellent!  But left everyone wanting more, so sad.  Oh well, good chance to fill up on fruits, not a bad thing.  Well, and Eric gets a chance to down a few more beers, ha ha.

We had decided that we would have take-out pizza, something special for Christmas eve.  Yikes, hard to believe that Santa could travel to such a warm climate.  Hard to believe that it’s Christmas eve!  Everyone but Eric and I headed out to order the pizza.  Eric stayed to drink more beer and listen to his iPod (he has “both kinds of music – country and western”).  He played a couple for me, ha ha – “A Pickup Man” and “The Drinking Bone”.  My son with the cowboy boots, cowboy hat, and a case of Coronas, hard to believe!

I did a bit of E-mail, bought a Long John Baldry LP on eBay (Rock with the Best, 1981, contains When You’re Ugly Like Me (You Just Naturally Got to be Cool) ), it should arrive in Pembina in the next ten days or so.  I called my mom, she is doing well thankfully.  She and a friend will be going to the candlelight service at Charleswood United this evening.

Dayna arrived back with the crew, and while the everyone else went to the beach, she and I wandered off to the bank to use the ATM to get some more pesos.  Yikes, it is difficult to get used to the fact that they use the same “$” symbol for prices in pesos as we use for dollars, yet the peso is worth around 1/10 of a dollar.  Oh well, I like the ring of having a thousand pesos in my pocket!

After I got back, I also wandered down to the beach, while Barrie, Helen & Dayna stayed behind.

Well, let me just confirm for you that the ocean is salty, wow.  I played football pitch and catch in the water with Eric and Matt.  Apparently those two were doing it for hours, wow.  I just got a half hour in before it was time to go.  I made a few strokes in the salt water, up and down the beach a bit, then headed for shore.  I flopped on my beach towel for a bit, then wandered back for supper. 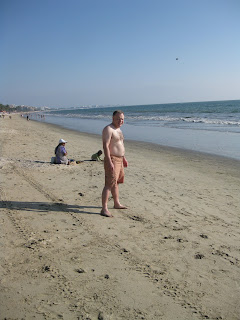 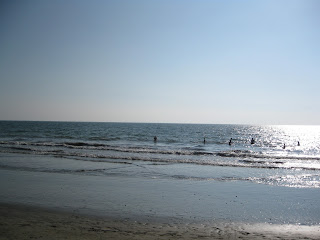 So supper was pizza, yes!  Very good pizza too!  We sure cleaned that up in a hurry.  We ate up on the palapas, ah yes.