Well, we packed up and left the Sea of Galilee this morning.  Our first stop was in Cana, where Jesus performed his first miracle – changing water into wine for a desperate host at a wedding feast – see John 2:1-11.  Before arriving, our guide Lazarus gave us a bit of a lowdown on the story.  Wow, there are so many layers to this story!  I couldn’t begin to capture it, but scholars have found a parallel between this story and Jesus’s crucifixion and resurrection narrative, the whole “three days / third day” thing, and saving the best for last thing.  Hmm, methinks we could learn a lot by at least listening to this kind of discussion, tends to interpret & explain some of those contradictions that folks tend to come up with regarding the faith.  Plus, remember that the book was effectively recorded by nomadic sheep herder people, and it contains their perspective and cultural views.  By getting over here and seeing some of their perspectives, it really helps in my understanding, anyway.

So as is often the case with these things, there is a site which tradition holds is the place for the changing of water into wine, and multiple churches have been built on this site – more modern churches on the ruins of older churches that have decayed and fallen.

Then we were off to the Church of the Annunciation in Nazareth, where tradition holds that Mary mother of Jesus received the message that said she was going to conceive a son by the Holy Spirit.  See Luke 1:26-38.

The central part of this church is a grotto on the lower level in which Mary is said to have been when she received the message. 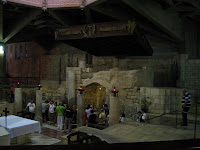 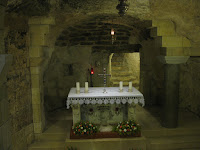 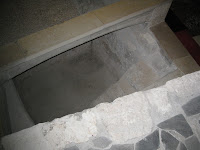 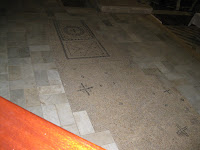 – dozens of huge mosaics inside and outside the church, each one about 8 ft high by about 4 ft wide.  All of them are in coloured ceramic or stone, except the one from Canada, which appears to be in wood.  I guess our artist wanted to be unique!!

Again, Mass was going on when we were wandering into and out of the sanctuary – I kind of felt like an intruder.  But they didn’t seem to be disturbed.

Then it was off to Tel Meggido, inhabited from about 7000 BC to about 600 BC.  During that time, apparently it changed hands by force about 25 times.  What turmoil!  It controlled the critical trade routes in the region.

Why should we care about Meggido?  You may know it by its Greek name, Armageddon, see Revelation 16:16.  This is where the final battle between good and evil will be fought.

Some of the interesting features of Meggido:
– A fake entrance gate, which ends in a brick wall – to divert an enemy long enough to get organized inside. 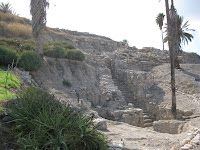 – The real entrance gate leads to a fake courtyard, which is actually below the level of the city, so was good for an ambush.  The enemy fights to gain access to the courtyard, suffers losses, and relaxes.  Then they get cut down by the archers of the city, shooting from protected positions on the high ground.

– Early archaeological digs destroyed upper layers when they were searching for treasure in the lower levels.  Modern techniques painstakingly remove and catalogue every item at each level before moving on, to maintain as much as possible, but takes much more time.

– Huge in-ground grainaries for gathering tax grain from “daughter cities” all around the area. 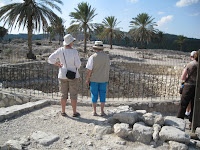 – An underground tunnel that goes well outside the city walls, to the city’s water supply, to allow the retrieval of water without risking enemy contact.  The water springs are covered and disguised from the outside, so the enemy doesn’t discover them, poison them, or use the tunnel to invade. 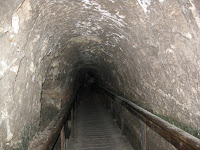 After a cafeteria style lunch in a restaurant attached to the Megiddo museum, we left for Bet She’an National Park, which is the ongoing excavated ruins of the Roman city of Scythopolis, one of the ten Decapolis cities.  Wow, very amazing!  A huge earthquake in 749 levelled the city, and it never recovered.  Now they are unearthing the city and doing selected restoration.

Some of the highlights:
– columns everywhere, phenominal 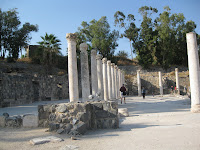 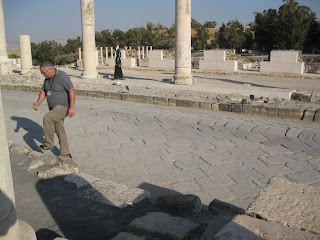 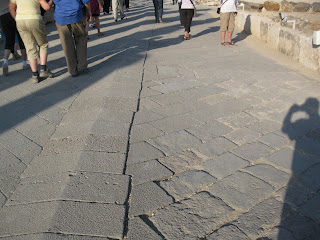 – rather crude public washroom facilities – you sit on an open wall with your butt hanging between two flat “seat plates”, underneath which runs cleansing water

– a huge theatre with amazing stage and seating – probably more comfortable than our Blue Bomber season tickets, by the looks of it

Once done at the Bet She’an site, we were off to Jericho, but didn’t arrive until after dark.  Nice hotel though – the International Hotel.  Finally, wireless Internet access that’s included in the room cost!  And a very nice room, too.