Well, this was going to be a busy day, but it didn’t start out that way.  Apparently there has been a cycling road race going on yesterday & today, right down the highway past the kibbutz we are staying on.  This morning, on a few hours’ notice, instead of just closing one of the two lanes, which would allow us to exit, they went and closed both lanes, stranding us.  So, we showed up at the bus at 08h00, only to be told that we couldn’t leave until 10h30.  Oh, well, some time to chill and check out the gift shop!  We went to the gift shop over at the Jesus Boat Museum, they were quite well stocked, so we picked up a few things.

Oh yeah, and Dayna vegged out for a bit in a unique style hammock.   We should get a couple for home!

Interesting though, we talked to a couple that came in this morning, and they actually drove through the fields to get to the kibbutz!  I guess some folks are more desperate than others.  At least we weren’t trying to catch a plane this morning.

Our first stop this morning was the Church of the Multiplication of the Loaves and Fishes at Tabgha, not far from the kibbutz.  See Mark 6:30-44.  The altar is built on the stone that Jesus is said to have stood when he blessed the five loaves & two fishes, then performed the miracle of feeding five thousand men (and probably women & children too) there.

Then it was on to the Church of Beatitudes, where Jesus is purported to have given the sermon on the mount, see Matthew 5, 6 & 7, including the Beatitudes.  The sermon would have been given on a slope around this location, not actually at the location of the church, since a sloped area would provide more of an natural outdoor amphitheatre.  It’s difficult to build a church on a slope, so the church is on the summit.  Still, very beautiful indeed.

After the Church of Beatitudes, we ventured into Nazareth to visit the Nazareth Village, which is part of a Nazareth village reconstructed from the time of Christ.  It has people dressed in period costume, doing period activities, including driving sheep to and from pasture, harvesting and pressing grapes, harvesting and pressing olives, and making textiles.  There is a small vineyard, an olive grove, donkey driven olive press, two representative period homes, and a synagogue.  Our tour guide had an interesting accent, so I asked where she was from – she was from Virginia, been there only two months, on a twelve month volunteer mission.  What a fun job!

We had a nice lunch at the YMCA restaurant downstairs.  It actually looks like this Nazareth Village is a project of the YMCA.  Lunch was expensive, but also very good.  Things went downhill when they came to collect the cash for the meal, however – the dual currency thing (3.6 New Israeli Shekels = 1 U.S. dollar) causes a lot of confusion.  The fellow was doing math poorly, miscalculating change, getting the exchange wrong.  I got out of there paying in U.S. dollars which made everyone happy.

Then off to the Church of the Transfiguration on Mount Tavor (also known as Mount Tabor).  You get to go only about 1/3 the way up on the tour bus, then there is a transfer terminal where you wait for smaller vans to take you the rest of the way.  When you ride in those vans, you find out why – the rest of the way is a steep grade with only about 200 ft straight runs connected by about 20 switchback curves!  The road is barely wide enough for two vans to pass, and they drive like madmen!

Once at the top, there are ruins of old churches on the site, and a 100 year old Franciscan church on top.  We a discussion outside the church, then went in.  There was a mass going on and we saw part of it, very ornate, very nice. 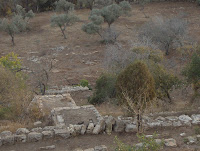 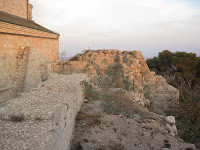 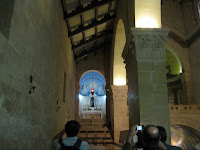 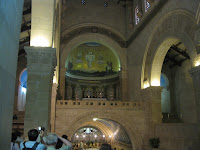 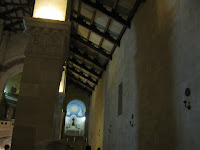 By the time we came out, it was sunset.  Wow sunset comes on quickly in this mountainous country which is closer to the equator! 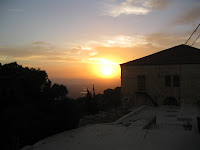 Then a break-neck ride down the mountain, back onto the bus and back to the kibbutz.  Dinner was great, then a few glasses of wine, blogging, more wine…  Can’t leave any wine, checking out and off to Jericho tomorrow!