Well, today was what they call a “free day”.  This does not mean free as in no cost!  It means “do what you want”.  But it was nice anyway.

Well, I figured out today why the ancient Egyptians used to worship the sun.  Man, is it nice here!  For a fleeting moment, I had this vision of plunking down my Visa card and saying that we’d stay here for the rest of our time in the far east – rejoining the tour just in time to fly home.  But, as I say, it was a fleeting thought – I cannot pass up the opportunity to see all of the other Holy Land sights!

I woke up early this morning, something like 7 AM, with the feeling of cotton batten in my mouth.  Yup, my CPAP machine, which never uses up its supply of water, had used up all its water in the night.  I guess that’s what they mean when they say you are in a desert!  I refilled it and re-crashed.

We were up at the break of 9 AM for breakfast.  Yes, it was nice to sleep in for one day, without having to pack and run for the bus.

We lounged around the resort pool for the morning, and that was nice.  The pool itself was actually quite cold, more like a lap pool than a spa pool, but what the heck.  As we sat by the pool, I could hear all kinds of languages spoken – not that I could understand any of it – but I heard several distinctive languages, including Italian, French, German and Russian.  This really drove home the fact that we are actually in a resort on the other side of the planet!

At noon hour, we took the shuttle bus to the “Taba Resort Centre”, which is an open air mall of little shops.  Almost every shop we went into, the shop keeper said, “British” and smiled.  I had to say “no, Canadian,” and they were astonished.  My guess is that they have a lot more British tourists here than Canadian – which makes sense, if it’s 13 hours of flying just to get here!

In the afternoon, we did something evil and washed some of our clothes in the sink.  It’s so dry here that they dry almost immediately!  Well, just my luck that apparently my clothing holds more water, and sadly it’s still wet – I may be packing wet clothing in the morning, ugh.  We have to pass through Israeli customs and then Jordanian customs on our way to Petra tomorrow; pity the poor border guard that has to open and inspect my clothing, ha ha!

Then we packed up and went down to the beach.  Dave Batson told me quite earnestly that I had to take a swim in the Red Sea, and being the earnest friend of Dave that I am, I took that as an order.  I’ve never had a swim in salt water before, wow!  It turns out that the sea is actually much warmer than the pool.  The only annoying thing was that there are a lot of rocks along the shore, you *must* wear sandals when going into the sea.  Because of this, I left my goggles on the shore, but I didn’t realize that the rocks stop and it’s back to pure sand about 20 ft offshore.  Well anyway, I took a nice long swim in the sea.  I couldn’t open my eyes, it was very painful, and I got a significant salt taste with every stroke, but it was great!  The water was very soft with all that salt.  But hey, being on a sodium reduced diet, I have to really watch my intake for the next month –  yikes.  All in all, a very nice thing to do.  Thanks, Dave. 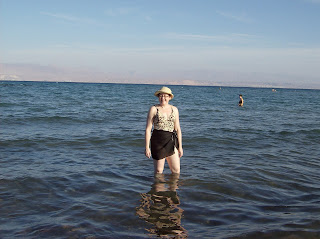 While we were in town I finally found a place to purchase a corkscrew, so we could open the bottle of wine that we bought in Giza (oh I see now that I didn’t include that story in the blog, sorry, should have).  Well, let’s just say that I wanted a bottle of Cabernet Sauvignon, and ended up with Rose, at an inflated price.  We’d better drink it before we exit Egypt, I said, because I have no inclination of carrying it home!  Well, so I bought the corkscrew, and then came back to the room.  A half hour later, I was fumbling with my swimming stuff, and what falls out of my bag?  A multi-purpose hobby knife with corkscrew!  Oh, man.  Well at least I have a mediocre Egyptian style corkscrew now.  A trophy, a keepsake, yeah right.

So we finally got to drink that Egyptian rose wine that we got in Giza.  Whoopee.  It was OK.  Especially after the first glass 🙂

One last thing about the Taba Resort.  I spotted some interesting trees.  They are tall but too too straight!  Well you get up closer and take a look at the top – they aren’t trees at all, but cell towers!  I’ve read about them, but never seen them in the wild. 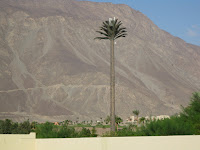