So we’re up in the morning to have breakfast, pack, and leave the resort.  We are going from Egypt to Jordan today, with a short trip through the southern tip of Israel.

We loaded up the bus, got on the bus, got ready to drive away, even did a pass around the reception loop and back to the door of the hotel.  It turns out that you have to get clearance from the Egyptian “Tourist Police” (yes that’s what they call them, you can see the buildings cars & uniforms everywhere) before they will even open the gate of the resort to let us out!  So we wait for about 40 minutes to get that clearance.  So now we are 40 minutes late starting.

The drive to the Egyptian/Israeli border is shorter than we anticipated, about 20 minutes.  We say “goodbye” to our guide and drivers, then off we go, bags in tow.

It turns out that you are treated just like in an airport.  You go through a metal detector, put your bags through an X-Ray scanner, then an optional bag inspection.  Then they take your passport and check it in some way.  Then you go back outside to a deserted “no man’s land” stretch of road, where you must walk the 100 or 200 feet to the Israeli side, where you queue up and do the whole metal detector, X-Ray scanner, bag inspection, passport check again.

Well I should say that in all our stay in Egypt, we went through dozens of metal detectors.  Only at the Egyptian Museum in Cairo did anyone even pay attention to them.  At the end, we were ignoring them, keeping our change and pens etc in our pockets, the metal detectors would go like crazy, and nobody would care.  And in the X-Ray machines in Egypt, nobody blinks an eye about my briefcase full of electronic gear – notebook computer & adapter, world cell phone & adapter, BlackBerry, handheld GPS, little camcorder, digital camera, etc.

But at the border crossing, I emptied my pockets as I should, put my bag on the belt and went through like a good boy.  No problem exiting Egypt.

Now, getting into Israel was another matter.  We ended up behind an American tour group, which was no problem, but this meant that we had to queue up, Disneyland-snake-style, and wait to get through.  I was about third or fourth of our group in line.  We saw a pre-screen customs person (beautiful young women guards at this border crossing, let me tell you, but hey they have the guns and we are tourists, so shut up and answer the questions!).  Then, just as we reached the X-Ray machine, the security staff started shouting for us to leave our bags and got back out the entrance way IMMEDIATELY.  I snagged my wallet (passport was already in hand) and headed back as I was told, as the rest of the crowd started backing out WITH their luggage.  I was shouting to leave the luggage as we were instructed (the pretty young ladies have accents and may not have been understood), which they finally did, and went outside.  Well then they were a bit upset at ME.  Well, hey, when Israeli security tells you to *vacate the building* you do what you are told!  Then they let us back in.  We aren’t sure what happened, but someone noticed that they let the lone wheelchair person and her husband stay through the commotion, so we suspect that it was a drill, ugh.

Then we get to immigration control.  I approach a station and ask for my visa to be put on a separate piece of paper (Dave Batson advised me many years ago, and our guide reiterated this today, that it’s a good idea to not have Israeli visa in your passport, in case you ever go to say Saudi Arabia).  She shoved a form at me and told me to  go back and fill it out.  Fine, but there is no place to do that.  She shrugged.  Not her problem, apparently.  So I wandered back and found an ATM that had a surface I could write on.  [ luckily I always carry my own pen ]  Back to another station, another young woman.  This one on her BlackBerry the whole time, sounds like she’s talking to her boyfriend.  Passed me through, no problem.  Except she apparently forgot to give me an important piece of paper…  but I’m skipping ahead in the story.

The whole thing took so long that security sent our bus away.  We had to wait another 30 minutes outside in the heat, waiting for another one.  So now we are in Israel.  A 20 minute drive across Israel, and now it’s time to do the Israel-to-Jordan crossing.

This time we line up for an exit visa from Israel, then go to the armed security station just outside no man’s land.  He passes everyone except for two of us, saying we were missing the requisite “pink piece of paper” and that we had to go back to Passport Control to get it.  THIS Passport Control, or the one at the Egyptian border, I ask?  Well, this one will do, fortunately.  So I get the pink paper, present myself at the border, and this young man (with automatic weapon at his side) looks at it and says, “Sorry, wrong pink paper,” and hands the passport back.  I just managed to choke out a “what?” before he chuckled, took it back, and said “JUST KIDDING.”  Oh my God, I guess he has a bit of a sense of humour too.  And he managed to get a rise out of me, that’s for sure.  I take border security too seriously, perhaps.

Then we stumble the 100 to 200 feet to the Jordan side of the border, where they subject us to metal detectors (results ignored) and X-Ray machine (they asked to see the laptop and that was all).  Whew!  Then another 45 minutes for Jordan officials to check the passports, before we could get on the bus.  Oh, and another 100 foot walk with our luggage to get to the bus, too.

All of this left us tired and a bit grumpy.  Fortunately, we zipped into Aqaba and picked up box lunches, and off to our next stop, the Wadi Rum desert.

I wasn’t expecting much out of this stop, but it was a blast!  We were loaded into old beat-up Toyota & Nissan 4×4 trucks fitted with open air benches in the back, and zoomed out across the desert.  Well, “zoomed” might be exaggerating a bit.  We rolled out across the desert.  We stopped to take in some breathtaking views, get a camel ride (dromedary actually but I’ll never tell), visit a Bedouin tent and have some of their special tea & smell their incense (unfortunately incense and I don’t get along but I sucked it up for the occasion).  Then back to the interpretive centre.

Now, these 4×4 trucks – they were rough and beat up, all sounded like diesel engines, although a careful listen tells me only half of them were diesels (others were just on their last legs?).  The seats in the back were not bolted down, which made me nervous.  And the “cover” and “roll cage” was made of tent poles, no help at all.  Fortunately, we did go fairly slowly most of the way, although I must say it was pretty bumpy.  There was a “back rack” right behind the cab and I hung tightly onto that, figuring that I could probably hold Dayna and I in the box if I had to.  Turns out she had noticed and was hanging on tightly too.  Well, no big troubles, except for one… 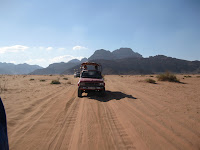 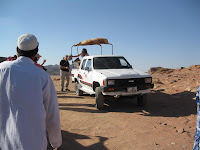 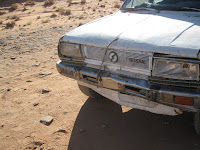 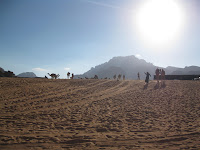 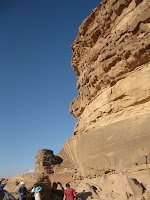 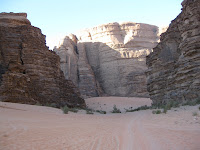 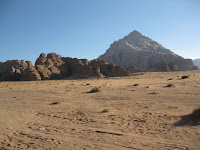 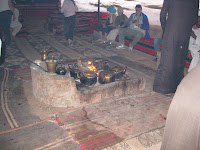 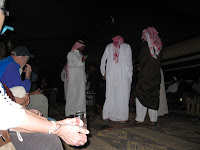 At the first stop, we were there only about 30 seconds when there was a deafening “bang” like a gunshot.  I thought one of the goof drivers had shot a rifle into the air to create a scene.  Well, no, it was the right rear tire of the 4×4 behind us letting go in spectacular fashion!  We were shocked, but as we went on our way getting our pictures, the four drivers got together, took a spare out of one of the other trucks (seems they only carry one between them), and changed the tire.  Put me a bit on edge, because if that happened while driving…  well, I worry too much.

By the time we reached the resort in which we are staying, it was thoroughly dark.  It’s very nice, but very confusing.  It’s called Bait Zama, in Wadi Mousa.  Maybe you can look it up.  It’s actually a rebuilt ancient community with many buildings, each housing several large suites.  It’s very nice.  However, dozens of steps and cobblestone roads make it tough to find your room!  Hopefully some pictures tomorrow.