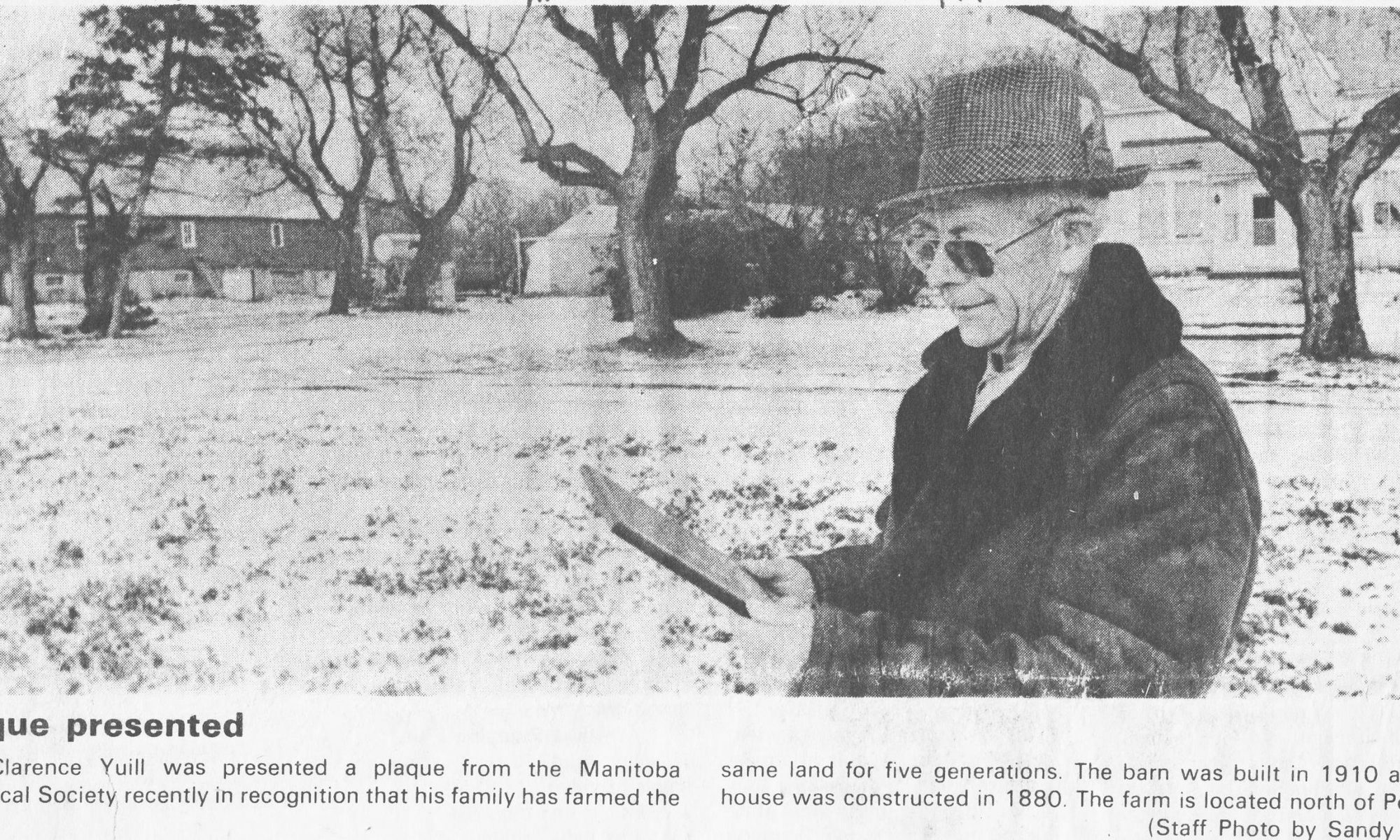 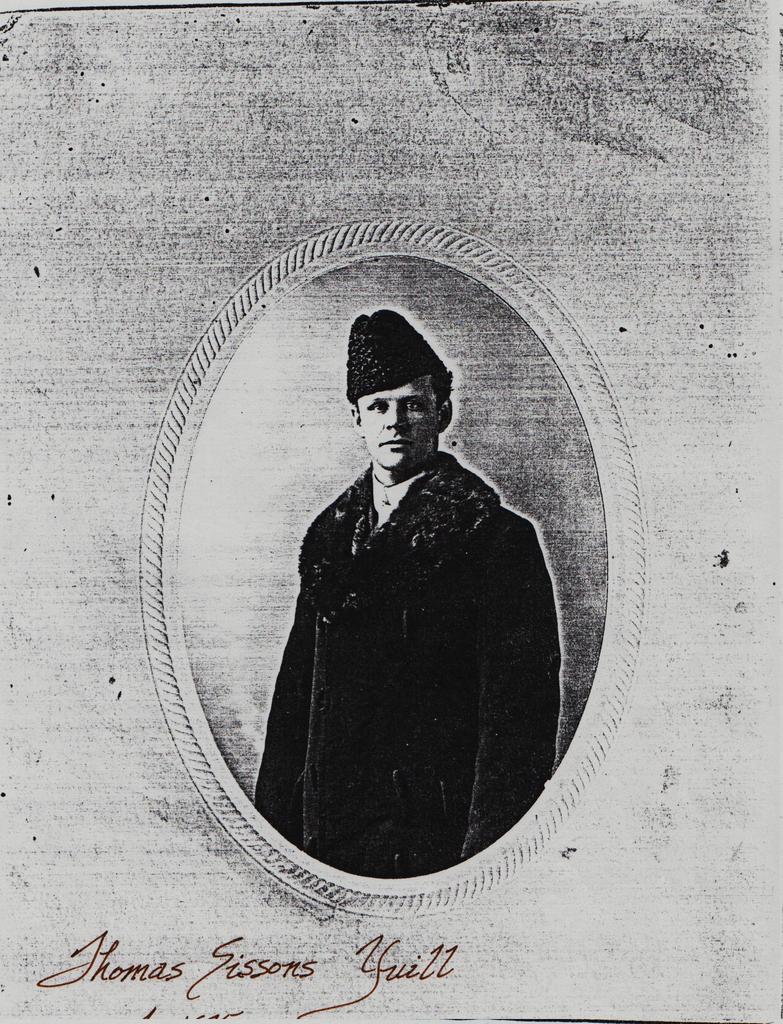 In 1911, Thomas was a single popular young man and was farming 34-12-7, just north of Portage la Prairie. Along with brother David, the “Yuill Brothers” also owned and worked farmland at Lakeland, owned and worked a wood lot at Riding Mountain, as well as having built themselves a cabin on Lake Manitoba.

The wood lot kept the “hired hands” busy during the winter months.  Ducks, geese and elk were hunted from the cabin. They could also harvest fish and the ice for the “ice house” from the lake. They did mixed farming – they raised animals as well as doing grain farming. Horses, a small herd of cattle, pigs, and chickens filled the barn. The milk was sold to the creamery, and for a short time, Thomas continued using mules to haul freight between Winnipeg and Portage, as his father had done before him.

In fall these busy farmers would move the thrashing machine to Lakeland by way of the railroad.… which was a daunting, yet necessary, feat!

On December 2, 1911, Thomas and David had completed the day’s work when there was a terrible accident.  An account of the incident is noted in the newspaper clipping which follows. 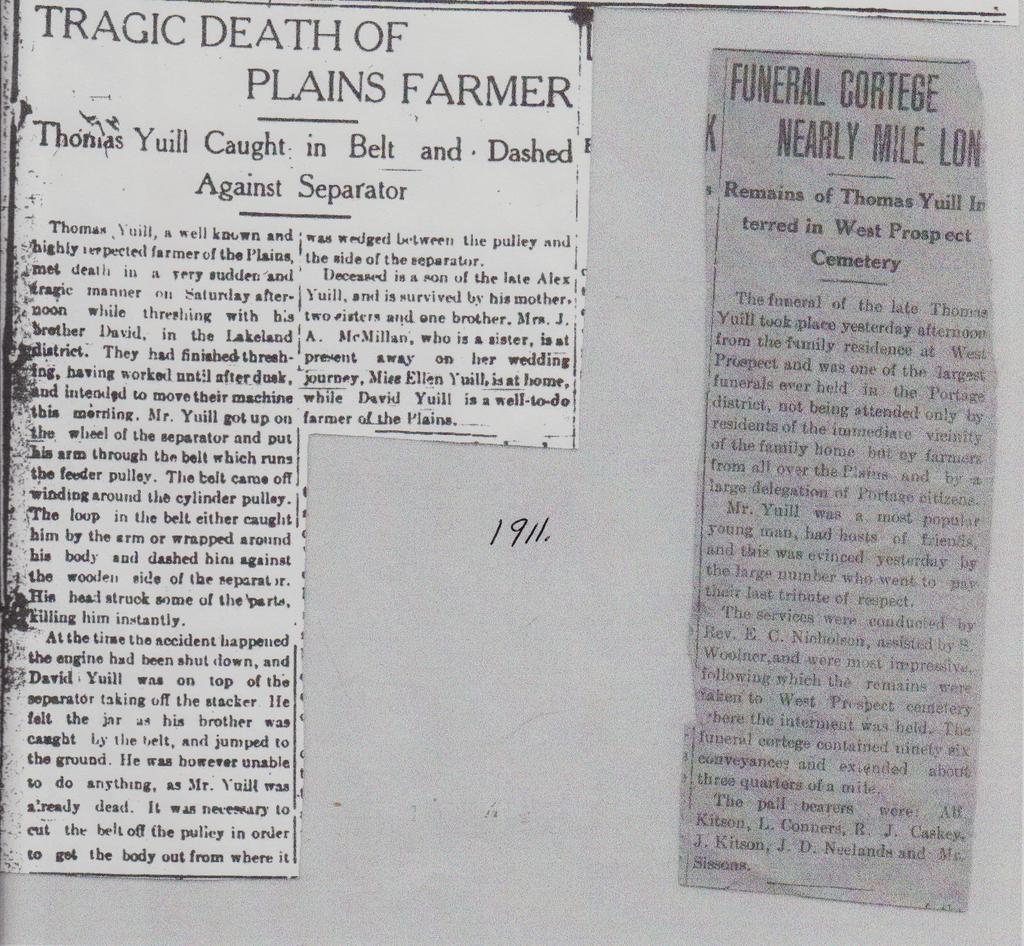 Thomas is buried in the cemetery on the corner of A.D. Yuill’s land (34-12-7), which his grandfather passed on to the Trustees of the Congregation of the Presbyterian Church in Prospect of Manitoba November 5, 1897.

Pioneer farmers faced many challenges. It was a great feat for a child to reach adulthood. It was a terrible loss when they died in early adulthood. 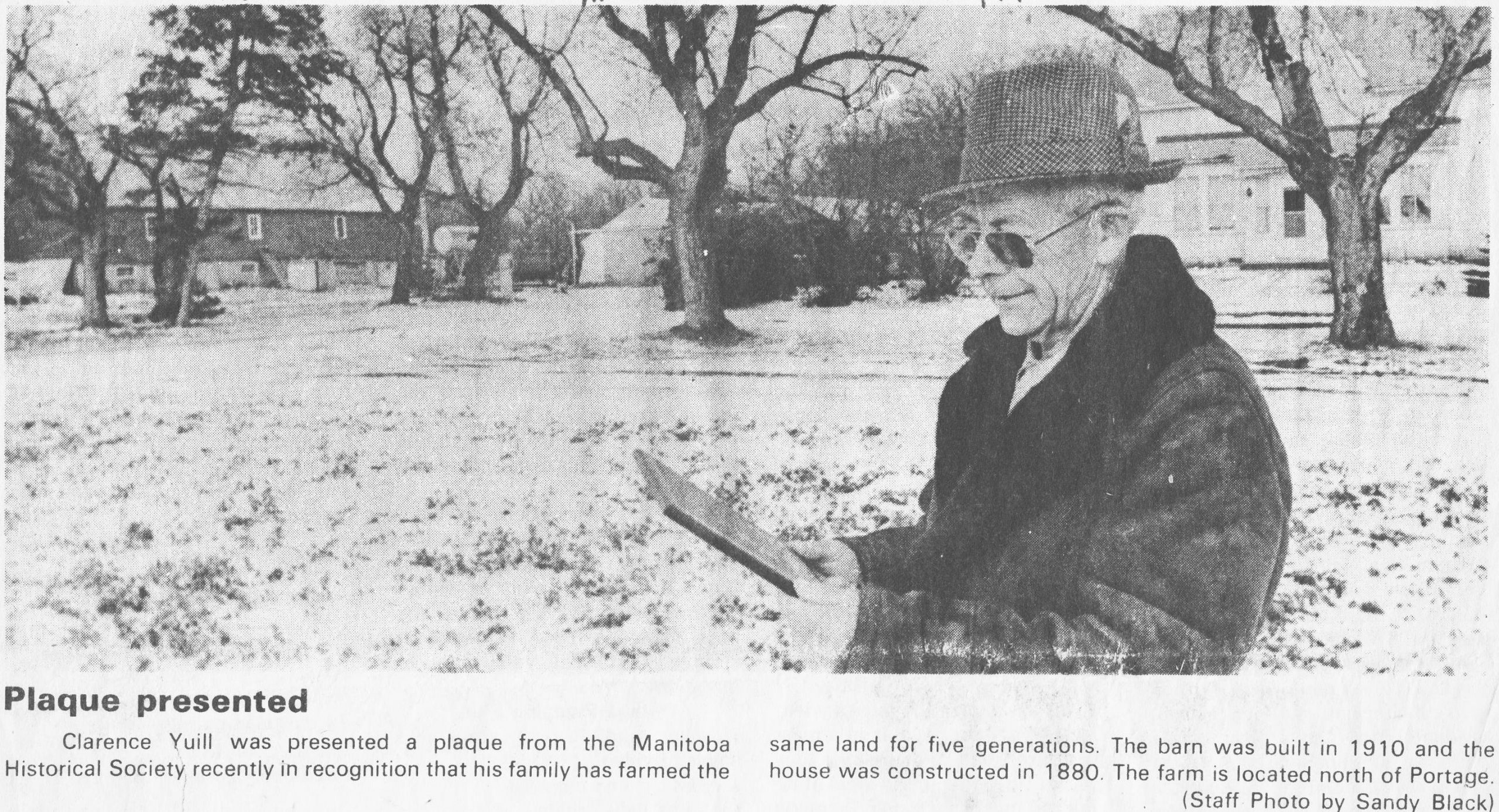 Clarence Alexander Yuill was born in 1905 to David Williamson Yuill and Annie (Grobb) Yuill, on his grandfather’s homestead north of Portage la Prairie.

Married in 1928 to Verna Mae Gallaway, in the early days they practised mixed farming while they raised their young family. The grain paid the bills, while the animals and garden produce fed the family. You did not eat what you did not grow!

In later years rapeseed, flax, malt barley and sugar beets were added to the traditional grains.

C.A. was a sociable person and kept a busy schedule. He played saxophone and piano. He enjoyed tinkering with radios and machinery, which resulted in the establishment of electricity (his own version of the “Delco-Light”) and running water on the farmstead, far ahead of his peers.

Clarence’s many interests included being a member of the Portage District Plowing Association, member of the Portage Flying Club, trustee of West Prospect School from 1942-1954, then President of (new) Rural School Trustee Association. He worked for four years with the Manitoba Deputy for the Department of Education and the Manitoba Minister of Education to establish a High School for Rural Manitoba students, who until then, could only take High School by correspondence. He was therefore one of the founding members of the Rural Secondary School Board, and was instrumental in obtaining Portage la Prairie St. Mary Parish Hall as the first rural High School room in Manitoba.

Clarence was Councillor (Ward Three) for the RM of Portage la Prairie from 1964-1977, in total spending thirty-five years as a School Trustee and Rural Councillor.

In 1979, C.A. was presented with an engraved Centennial Commemorative Medal by the Manitoba Historical Society.  Recipients were selected for “recognition of personal contribution to the way of life in Manitoba”.

C.A. was a bit of a joker, so Verna had to be on guard… one New Year’s Eve they were returning from a neighbour’s party when Clarence drove past the end of the farm lane. He was driving a new car purchased that afternoon.

“Here, you drive!” Clarence exclaimed, as he pulled off the steering wheel and handed it to her. It had disengaged from the steering column!!