Today had a relatively slack start to it.  Our wake up call wasn’t until 07h00, and we didn’t leave the hotel until 09h00.  That was a nice change.

Mount of Olives
Our first stop today was the top of the Mount of Olives.  Us and about two thousand other tourists, ugh!  From the top you can see all of the great landmarks of the east part of the city.  Our tour guide pointed many of them out, it really brought home the fact that we are finally in Jerusalem!

Dominus Flavit and Jewish Burial Site from Time of Jesus
We then walked down a steep street that ran to the Garden of Gethsemene.  Along the way there is the beautiful Sanctuary of the Dominus Flavit (God Sheds Tears).  There was a service going on inside the sanctuary, but there apparently isn’t really much to see inside, we just marvelled at the architecture of the outside of this building, and moved on.

Actually, in the way to the Sanctuary of the Dominus Flavit, there was an old Jewish burial area, preserved but open for viewing.  This area dates to around the time of Christ.  Now, apparently the custom at that time was to have a cave or carved tomb.  The opening was small, and a stone was rolled to close the opening, but it could readily be rolled away by a strong person.  The tomb had several passages (generally three), each of which opened to a new room.  Each room had many niches cut into the walls big enough to house a body.  When the body was prepared and ready for burial, it was put into a niche, and the stone rolled to cover th opening.  A year later, the stone was rolled away, the remains retrieved and placed into an ossuary box for final burial.  The niches were used again and again.  Wow.

Israel Museum
Next we piled back into the bus for a trip around the south end of the old city, up through the Jaffa Gate, past the Knesset (Israeli Federal parliament building) and to the Israel Museum.  Here there were two main attractions for us – a scale model of Jerusalem at the time of the destruction by the Romans, at about 66 AD, and the Shrine of the Book which houses the original Dead Sea Scrolls.

The scale model is impressive, very detailed.  It’s out in the great outdoors, exposed to the elements, but then again it also appears to be made of the same material as the city itself, so it should wear well. 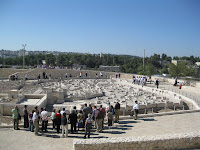 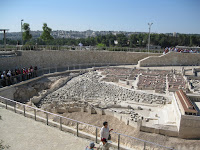 Unfortunately, the other attraction was full when our turn came up, I went to the washroom and when I returned (washroom too far away!), Dayna and crew had been through and advised that I should not go back.  Oh well, it wasn’t a main attraction, although it would have been nice.

Through the Security Wall to Bethlehem!
We got back on the bus and went through the security wall to Bethlehem, just inside the Palestinian Territory.  It’s just like they show on TV – an ugly 12 foot concrete wall with a small opening and a check point.  There is a sign that says “no Israeli citizens allowed” – can’t see how this can be true!  We had to bring our passports today, so on the way back, we could prove that we weren’t Palestinians.

Well, the scenes of devastation shown on TV aren’t true, at least not in the Bethlehem we saw today.  We stopped at Ruth’s Field Cafe, a nice restaurant, and had a great lunch, chicken shaved like Gyros and put with vegetables in a half pita, wow.

Church of the Nativity
Then, off to the Church of the Nativity, built on the site where the manger birthplace of Christ was.  So we were advised that it could be up to 1-1/2 hours’ wait, we were ready – or so we thought.  As we assembled in the square outside the entrance, we were told that nobody was getting in, that some VIPs were showing up and that we would have to wait until they were done.  Two minutes later, a Mercedes sedan, three Jeeps and other vehicles pulled right up to the door, security showed up from nowhere with machine guns, body guards, and even a couple of young ladies in short short skirts – skirts that we wouldn’t be allowed in with (you showing of shoulders, and pants must fully cover the knees!).  Someone later ID’d them as Japanese from a badge somewhere in the crowd – not sure whether it was local diplomats, or perhaps officials visiting from Japan itself. 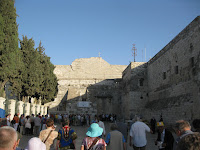 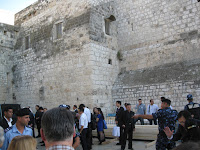 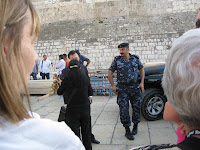 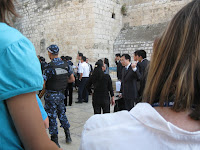 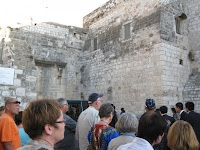 We finally got into the church, only to find that it was a HUGE hall full of people.  No organization, just a mess of people pushing their way to the front.  The church itself is under repair; I saw some note on the outside about fixing the roof.  There is a huge amount of scaffolding at the front of the church, so you can’t see the altar nor the icons and pictures and art around it – which is fine by me, because the art and icons aren’t what I am here for.  the manger itself is in an area below the altar – so we wait in this jumble of people for our turn.  Apparently we will get about 20 seconds in the actual area to take pictures, then we will be shoo’d out.  The folks behind us are from India, and they are pushing up on us, and our group is getting split up, ugh.  However, as we reach the front, our tour guide Lazarus hangs onto the scaffold and calls us all forward.  We gather as a group and go through as a group.  The Indian folks actually start chatting with us – they are from Mumbai, it sounds like the regional governor in their party!  How exciting. 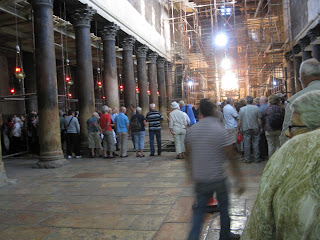 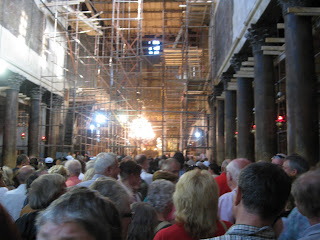 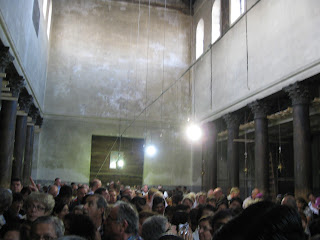 Anyway, we got down to the manger and see what’s there, it’s rather anti-climactic but I snap my pictures.  There are two sites – a rock with jewels and candles and treasures hanging from it, inside what looks like a deep fireplace, on the right – and a couple of hard stone areas that look more like animal mangers, on the left.  I took some pictures, and away they sent me.  I didn’t realize how steamy hot it was down there, or how stuffy the air was, until we came up into the (dusty and hot) church, which now felt cool!  Yikes.

Rock-a-Bye Baby – Stone Manager?
Oh, and about the manger.  It would have been made of rock not wood.  At the ruins at Meggido (Armageddon), we saw stables with horse mangers – made of rock.  So toss out your preconceived notions of cute little antique cribs made of wood.

Getting Away from the Site Back to the Bus!
On the way back to the bus, we were harassed constantly by vendors hawking their wares.  These ones, not satisfied to stand and yell as you pass by, walk in between us, try to interest us in their wares, lowering their prices constantly.  I had to run interference because they were really aggravating some of the ladies.  One guy got a little too energetic, so I had to look him in the eye and give him a stern, “No!”  Well that wasn’t good enough, he started pestering me then.  I turned askew to him, and told him “I SAID NO!” and that was the last I saw of the guy.  There were also dozens of children, some seemingly as young as five or six years old, just begging.  Yikes.  Apparently, if you give to one, you will be accosted by so many you will get torn apart.  I believe it.

That said, our tour guide advises that things are not as bad as the media makes them out to be, and my observations back that up.  There are poor people in Bethlehem for sure, but a lot of nice cars as well, and many mediocre cars too.

Back out to Jerusalem
Once back to the bus, we made our excruciating way back to the security wall, took about 1/2 hour to go 3 blocks.  Two armed Israeli military personnel came on the bus and checked every passport, and then we were through, hallelujah!

So you might ask why no pictures of the security wall, or of the military personnel or the check points.  We have been warned time and time again, all during this trip, to never photograph at security check points of any kind, or security installations of any kind.  And anybody who is wielding a machine gun gets what they ask for, let me tell you!

Anyway, the traffic in Jerusalem at that time, about 17h30, was just brutal as well.  It took another 1/2 hour to make it up to our hotel, a drive that we could have done in 10 minutes earlier in the day.  Oh well.

Concluding the Day
Once back, we had a few glasses of wine and went off to dinner.  Today it was quite nice, folks were excited about the baked potatoes!  First time on this trip.  I don’t know, I’ve liked most of the food, although it hasn’t always liked me – when you change the spices and things, add peppers and onions where unexpected, you can expect the middle aged gut to complain a bit.  I haven’t been too unhappy beyond that.

After supper, I finished my bottle of wine (Dayna drinks white and has plenty left, I drink red and it seems to evaporate quickly), and had to go get another one from the bar.  I’ve been working on this new bottle, and that hasn’t helped my productivity in this blog, let me tell you!  Oh well, that’s all for tonight.

Yikes, Early Morning Ahead!
Tomorrow we have an 05h30 wake up call, because it’s a busy day, getting underway at 07h00.  Yikes!  But it’s also our last day of touring, so we need to get in as much as we can.