Well, we started the day with some excitement – I could not find my glasses!  I am sure they are quite safe, they are in their glasses case, with a pair of sunglass clip-ons, but they are no longer in my possession, sigh.  We looked high and low, emptied all our suitcases and hand luggage, but no sign of them.  Finally, out of time, we had to run to check out, eat breakfast and get on the bus to leave Wadi Musa.  It wasn’t until a couple of hours later that I thought that they are probably stuck down behind the desk or the suitcase stand.  As it turns out, I could have had another chance to retrieve them… but, more on that later.

Fortunately, although I do complain about my eyesight, it isn’t really that bad.  I’m a bit nearsighted, but my vision is actually adequate for, say, touring.  So, onward we go!  We had to stop to buy water anyway, so we got a chance to see the Moses Springs in Wadi Musa (which supplies the Petra facility several km away through secret underground passages), and I bought a pair of cheap sunglasses from a convenience store.

I did commission the resort to do a search of the room, and I inquired at the front desk and the restaurant about if they had been turned in, but no luck.  I’m not sure they would have looked behind the furniture, however.  Sigh.

We left promptly at 8 AM, but decided to go to the Ash Shubak castle, instead of Kerak.  They are both 12th century crusader’s castles, but Ash Shubak is less busy and actually the first one of its kind to be built anyway. 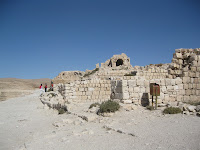 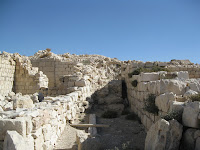 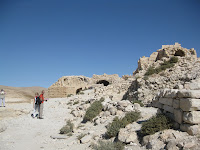 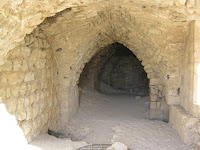 These castles were part of a network that were built to defend the Holy Land after it was taken by the Christian Crusaders.  It was held for some 70 years by the Christians, until Saladin and his Muslim armies took back the holy land and the castles.  Fascinating, they actually reworked key elements of the design of the exterior interior of the castle to make them more Islamic styled.  for instance, the Christians built arches in the Roman style, with a single capstone.  Muslims built arches with a split capstone.  So they changed many of the archways to be Islamic in style.

We have one woman who has difficulty walking any significant distance, so her husband pushes her in a wheelchair, so nice.  However, it turns out that the narrow road to the castle has a steep slope down then a steep slope up.  It’s too narrow for the bus to navigate, so we had to disembark at the visitor centre and do the hills on foot.

Well, the run down was precarious, but it was short, and we managed to keep the wheelchair straight and slow.  On the way up, well, the 5,000 ft elevation strained the husband’s ability, so halfway up, he needed help.  I was about to jump in when one of the ladies of the group started to help.  She had one side and the husband had the other side, which was great.  With about 100 ft to the top, she slipped and fell, hurting her wrist, and at about the same time, the husband just plain ran out of steam.  So I had to jump on the wheelchair and push it, alone, to the top.  Yikes, had no real idea what altitude could do to your strength – well more like your stamina!  It was all I could do to get that blessed wheelchair to the top.  Of course it was windy, gusty and dusty, so then had to help the lady into the castle while her husband caught up and transported the wheelchair.

Some of our folks tended to the injured lady, who herself was apparently a nurse before she retired, and we went on to tour the castle.  The tour guide was a local fellow with a basic grasp of English, but great knowledge, wit and humour.

Now the big concern was that the trip up was precarious enough, but going back down that slope in a wheelchair was going to be dangerous, well actually pretty well impossible.

As we went off to do our tour, I saw a young lady drive up in a pickup truck.  I waited for her and asked if she would run our wheelchair lady back down.  Well she spoke perfect English, and said she would.  Apparently she was from University of Florence, Italy, was a PhD student doing archaeological work on the castle.  Wonderful, I’ll look you up in half an hour when it’s time to leave.  Then, since I kind of missed the group, I proceeded to run around the castle
on my own.  Very neat, but a dangerous place – lots of loose stones, pits & wells just waiting for you to step into…  but I managed to avoid all that stuff and got some nice pictures.

Finally, it was time to go down, but I could not find that young lady from Florence!  I looked and looked, talked to her colleagues, even thought I caught sight of her for a few seconds, but could not track her down.

As a result, the lady who should have rode in the wheelchair had to walk down the slope (which was apparently possible for her, it’s going up that’s not possible), with someone else trailing with the wheelchair.

Once on the bus (first had to pay 1 Jordan dinar to use the bathroom – well actually the bathroom is free but the toilet paper is 1 JD), we found that our guide had taken the injured lady off to hospital.  Now we find out what the Tourist Police do – apparently they transported her there.  Now we had to meet them at the hospital, in the tour bus, and see what shakes.

So where do you think the hospital is?  All the way back in Wadi Musa!  So we drove 1-1/4 hour back to the hospital.  She was already done!  She had been seen, triaged, X-rayed twice, diagnosed with two fractures in the wrist, cast & splinted, all by the time we got there.  The total cost?  About 70 JD – about US$100.  She purchased the insurance, so she will get reimbursed – but it’s nice to know that health care is not exorbitantly priced here.  [ NB we have the insurance too, and I’m glad we do ]

Then we were back on the road, now about 2 hours late.  We just burned it back through Wadi Musa, right past the resort we had stayed at (I waved a sad goodbye to my glasses for a second time), and out onto the highway.  Man, that driver drove as never before – at least on our trip so far!  We had a quick stop for lunch (another 1 JD for bathroom break, this is getting annoying), and then off to Madaba to see an Orthodox church with an amazing ancient map mosaic on the floor.  Now, apparently, the mosaic was part of a very old cathedral that fell into ruins, but some folk re-discovered the ruins in the 19th century and built the modern church on top, to preserve the mosaic and re-consecrate the site.

As we were inside the church and started gawking and looking around, we noticed that local folk were coming in and sitting down.  Some had trays of food.  Hmm, they are about to start a service here, I thought, so I left.  Then someone pointed out that they were all wearing black.  OOPS!  We were holding up a funeral mass!  We got our folks out just in time.  The locals were starting to look at us funny!  Now we found out why we were in such a rush to get there.  Oh well, we saw it anyway.

We were then supposed to run to the summit of Mount Nebo, which is the place from which Moses saw the Promised Land before he died (he was advised that he could see it but not lead the people to it, because he had disobeyed God in the early days of wandering).  This summit gives a huge panoramic view of the Holy Land, including the River Jordan, Jerusalem, and points all around.  However, it turns out that at that late hour, the summit was closed (dusk falls at about 4:45 PM, and it was 4:15 PM by now).

Instead, we went straight into Amman to check into the Mariott Hotel, which is fine by me.  We’ll do Mount Nebo tomorrow first thing.

But this Mariott, wow!  What a nice hotel!  And here, they have metal detectors and X-Ray machines, but they actually pay attention.  I got patted down because I didn’t take off my watch.  Hmm.

Dinner was nice, probably the nicest we’ve had on the trip.  We then decided to take a stroll down the shopping strip with one of our fellow travellers, Cheryl  Morrison from Calgary.  This was entertaining, because traffic here is very different than back home.  Well they drive on the s  ame side of the road, they drive like maniacs, but they are extremely courteous.  There are very few signals and lots of roundabouts.  When it comes to crossing the street, you judge your gaps, make your move, watch the traffic, adjust your pace, and wave off cars if you have to – they will stop.  Cheryl had some trouble with this technique, and she and Dayna wanted to run everywhere, yikes.  We made it there and back though, so we must have done something right.

We went to the shopping area because they wanted to check things out, but it was me who bought stuff.  Well, Cheryl did buy some earrings, which was a fair penny, something like US80, then again, not bad.  But it was I who purchased a pair of headphones with microphone (so I can Skype call and save money on long distance!) for the big price of 5 JD, and then later, a watch for 3 JD.  Like I said, big spender.  [ late breaking news: tried to set the time on the watch, and it doesn’t work – the hour hand won’t move – I got took, call the police!  Oh well, it’s a loss of US5 and I got a laugh out of the whole thing ]

So that’s enough excitement for one day.  Tomorrow, we are moving onward, first a few sites here in Jordan, including re-baptism in the River Jordan, apparently where John baptized Jesus, wow!  Then into Israel, where we get a boat trip on the Sea of Galilee, and lots more.